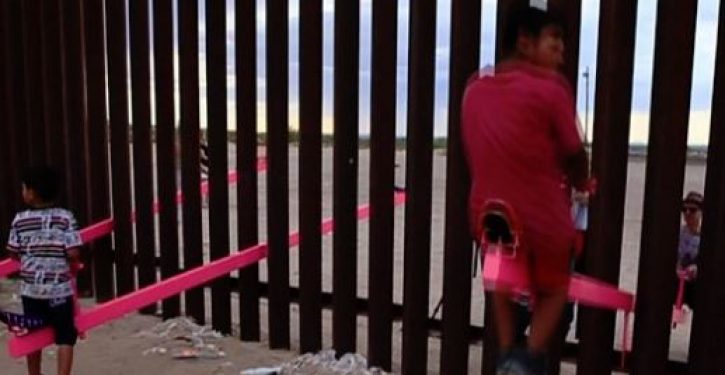 Dr. Martin Luther King, Jr., had a dream, too. Sadly, in recent years, King’s dream — that one day people would be judged by the content of their character rather than the color of their skin — has become more elusive and distant in recent years, as the word racism has been tossed about increasingly by the Left with reckless abandon.

The dream of Profs. Ronald Rael, of U.C. Berlekey, and Virginia San Fratello, of San Jose State, meanwhile, has become a reality. The two have realized their plan to install seesaws on the U.S.-Mexico border so that children from both countries might play together.

Three custom-built seesaws were installed in Sunland Park, N.M, where a slatted border fence separates it from Ciudad Juárez, Mexico.

According to the BBC:

Professor Rael said seeing the project come to life was “one of the most incredible experiences”.

The installation was widely praised on social media, with Mexican actor Mauricio Martinez writing on Twitter that is was a “beautiful reminder that we are connected: what happens on one side impacts the other”.

One might reasonably wonder what parent would subject his child to the danger of visiting the border, which has become something of a war zone. Last week, a group of migrants taunted Customs and Border Protection (CBP) agents to fire on them, yelling, “Shoot! Shoot!”

Then again, the gesture may be a welcome one coming at a time when Democratic lawmakers are accusing the Trump administration of child abuse.

Have you noticed that robots tend to be white? (Guess where this is heading)
Next Post
Richard Blumenthal, who fudged military record, wants Trump nominee’s résumé investigated