They stir images of the horrors of Nazi killing centers, where millions of Jews, Poles, Soviet POWs, and gypsies were systematically killed in one of the great horrors of the twentieth century.

For many of us, this imagery is associated exclusively with Hitler and his Nazi minions. Such a view does not align with the historical record, however.

“The Black Book of Communism,” an international bestseller, reveals that the handiwork of twentieth-century communists more than matched the Nazis. In fact, a glance at the figures shows the communist death toll dwarfs the bloody work of the Nazis: In China, 65 million dead; in the Soviet Union, nearly 20 million; Vietnam, 1 million; Cambodia, 2 million. North Korea is 2 million and counting. Chalk up a few million more with Eastern Europe (1 million), Africa (1.7 million), and Afghanistan (1.5 million).

“In all, Communist regimes killed some 100 million people — roughly four times the number killed by the Nazis — making communism the most murderous ideology in human history,” Marc Thiessan wrote in the Washington Post.

The different perceptions of the horrors of Nazi Germany to horrors of twentieth-century communism have long been a source of frustration for many who see cognitive dissonance in how the hammer-and-sickle is treated compared to the Swastika.

For lawmakers in Ukraine, this cognitive dissonance was apparently more than they could bear. In 2015, legislation was passed to make Nazism and communism legally synonymous.

Last Week, That Law Was Upheld by a Ukrainian Court

“The communist regime, like the Nazi regime, inflicted irreparable damages to human rights because during its existence, it had total control over society and politically motivated persecutions and repressions, violated its international obligations, and its own constitutions and laws,” the court declared, in a ruling published on its website.

The ruling appears to pave the way for the removal of most of the remaining communist monuments and landmarks bearing Soviet names in Ukraine. It also prohibits the use of Nazi and communist symbols.

The Starvation of Ukraine

That communism is a touchy subject in Ukraine should come as no surprise. As the Pulitzer Prize-winning author Anne Applebaum chronicled in her 2017 book “Red Famine: Stalin’s War on Ukraine,” nearly 4 million Ukrainians died from starvation in the Soviet Union between 1931 and 1934. Applebaum makes is quite clear how this happened.

“The Soviet Union’s disastrous decision to force peasants to give up their land and join collective farms; the eviction of ‘kulaks,’ the wealthier peasants, from their homes; the chaos that followed,” she writes, “all [was] ultimately the responsibility of Joseph Stalin, the General Secretary of the Soviet Communist Party.”

Millions of people starving is horrifying. What’s more terrifying is that this policy was not accidental.

As late as the summer of 1932 mass starvation appeared avoidable, Applebaum writes. The Soviets could have asked for international aid, as they had in previous famines. It could have stopped exporting grain or halted grain requisitions. Party leaders chose not to.

Instead, in the autumn of 1932, the Soviet Politburo, the elite leadership of the Soviet Communist Party, took a series of decisions that widened and deepened the famine in the Ukrainian countryside and at the same time prevented peasants from leaving the republic in search of food. At the height of the crisis, organized teams of policemen and party activists, motivated by hunger, fear, and a decade of hateful and conspiratorial rhetoric, entered peasant households and took everything edible: potatoes, beets, squash, beans, peas, anything in the oven and anything in the cupboard, farm animals and pets.

Before taking too much satisfaction in a nation equating communism and Nazism, however, the law in its entirety should be considered. As noted above, the legislation prohibits the use of Nazi and communist symbols. Violators of the law can be imprisoned.

There is a great deal of free speech confusion today, especially in the US. Does it apply to people making wedding cakes? NFL quarterbacks not standing during the National Anthem? Speakers invited to talk on college campuses? Conspiracy theorists on Twitter?

Each of these issues is a topic worthy of discussion, but the fundamental purpose of free speech is to protect people from laws like Ukraine’s. The First Amendment of the Bill of Rights says Congress shall make no law abridging the freedom of speech. That means the state won’t put you in jail for saying something deemed verboten.

Europe’s crackdown on free expression is no secret. In fact, it’s a trend many would like to bring to the United States. However, both Europeans and Americans would do well to consider two groups who would have enthusiastically supported state-imposed bans on undesired speech: Nazis and communists.

That in itself should be enough to make us recognize the danger of state bans on speech. 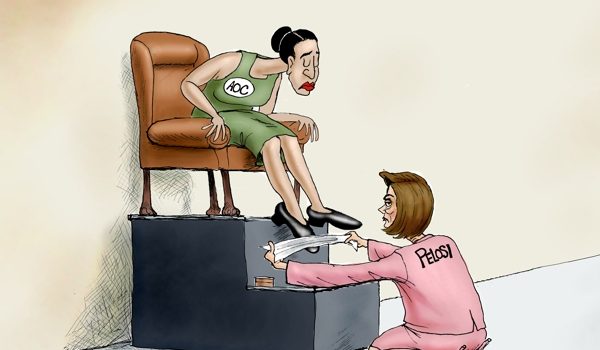 Cartoon of the Day: Know your place
Next Post
$12K a day: How white liberals profit from pushing ‘white privilege’