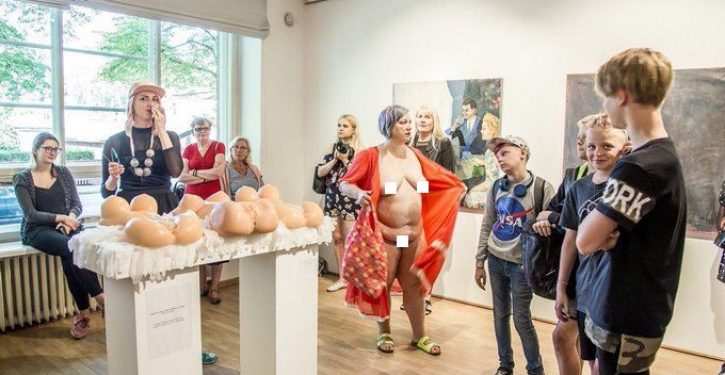 Today our class went to an art gallery to see paintings by Mare Tralla, a queer-feminist artist from Estonia. We also met the artist, who is now living here in London. I didn’t really understand the exhibit or its title, which was “No ‘But’ Can Be Used as an Excuse for Sexism!” But at one point Tralla opened her robe and showed us her fat, saggy old body. Gross!

This putative diary entry, written from a child’s perspective, might well reflect an adult’s reaction to the same experience.

I’m not entirely sure why the 52-year-old artist felt the need to flash schoolchildren, some appearing quite young, but according to the article cited, some outraged Twitter users equated the performance with “statutory sexual abuse.”

But one has to question not only the sensibilities of the artist but of the school for authorizing such a field trip in the first place.