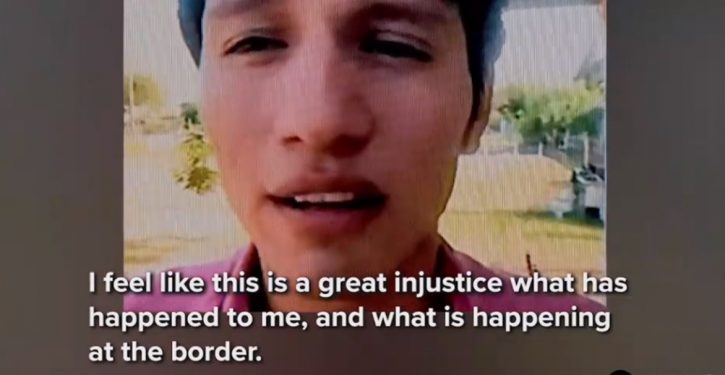 The rule of law will require some intensive sifting of evidence on this case.  The original reporting, still being used as the baseline story among major media outlets, was that Francisco Erwin Galicia, 18, was born in Dallas, Texas and has always been a U.S. citizen.  He was released on Tuesday from a detention center in Pearsall, Texas after being detained at an inland Border Patrol checkpoint with a group of illegals in early July.  The detention period was about three weeks.

There were already unusual factors in the story, although the media mentioned them only in lower paragraphs readers often don’t get to.  Galicia’s attorney, Claudia Galan, said on Tuesday that his mother “had incorrectly applied for a tourist visa for him that suggested he had been born in Mexico.”  The Border Patrol and ICE told news agencies that Galicia had provided “conflicting reports regarding status of citizenship” while he was in detention.

Galicia was traveling with his 17-year-old brother, Marlon, at the time he was detained.  Marlon was born in Mexico (i.e., after Francisco was born in Dallas), and is not a U.S. citizen.  He was in the U.S. illegally, and was returned to Mexico after the Border Patrol stop.

U.S. lawmakers including Ted Lieu (D-CA) and Alexandria Ocasio-Cortez (D-NY) seized quickly on the Galicia story to attack ICE, Customs and Border Protection, and the Trump administration, focusing on themes of overcrowding and alleged “abuse” in ICE and CBP facilities.

How would you feel trapped in a border camp, where guards wear face masks because the human odor is so strong?

Galicia now plans to sue the U.S. government over the detention, which mainstream media outlets are routinely referring to as “wrongful.”  The 18-year-old can be seen in an ABC video describing in distressed tones the inhumanity of his treatment at the hands of U.S. authorities.

His statements about the detention facility mirror Democratic talking points:

Galicia said he lost at least 20 pounds while living in terrible conditions in detention.

“There were up to 70 people in a room,” he told WFAA. “They wouldn’t let us brush our teeth or go to the bathroom. There were people who were very sick inside, and it’s really inhumane the way we were treated.”

He also claimed he had his “Texas state driver’s license, U.S. Social Security card and a copy of his birth certificate in his wallet at the time” he was stopped at the Border Patrol checkpoint.  He said: “I had all my papers, but they still didn’t believe me. I don’t know the reason why.”

Attorney Claudia Galan reportedly “took Galicia’s birth certificate and other documents to the facility where he was being housed two weeks ago but didn’t have any luck until she contacted members of the press.”

However, a senior CBP official gave a different version of events under questioning from Rep. Lieu on Capitol Hill on Thursday.  According to Brian Hastings, Chief of Law Enforcement for the U.S. Border Patrol, Francisco Galicia never claimed U.S. citizenship.

“I can give you some preliminary: the individual came through the Falfurrias checkpoint, he came through with the other illegal aliens, the individual claimed to be a Mexican national who was born in Reynosa, Mexico,” Hastings said. “Throughout the process, and while he was with Border Patrol, he claimed to be a citizen of Mexico with no immigration documents to be in or remain in the U.S.”

In fact, the Border Patrol found a document that indicated he had been behaving as if he were a Mexican citizen.

Curiously, Galan told reporters: “Francisco’s English is not good. So they probably thought, if he was a U.S. citizen he should be able to speak English.”

Maybe they did.  They probably also thought, if he was a U.S. citizen he would claim U.S. citizenship during a routine interaction at a Border Patrol checkpoint.  “Are you a U.S. citizen?” is the first question agents ask the driver and passengers of each vehicle that passes through.

Galicia’s lawsuit will join the new lawsuits of several migrant fathers claiming millions in damages for family separation at the border.  Some observers are likely to see this as a new tactic in a campaign to overwhelm the U.S. immigration and law enforcement system.

They and others may feel a twinge of cynicism about what’s going on with the Francisco Galicia story.  It must have its day in court, and if Galicia was treated unfairly, that needs to be dealt with.

The mainstream media probably won’t be of much help in getting to the truth.

It's a Mexican soldier and he stopped them in Mexico https://t.co/isyMRfnr3p