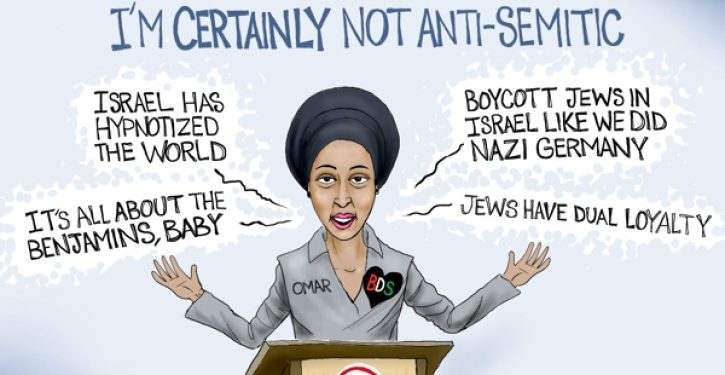 In reality, most of the deaths in this country are not caused by white men — or even whites of all genders. The FBI’s Uniform Crime Reports show that less than half of all murders are committed by whites. Whites constitute only 44.2% of all those arrested for murder and non-negligent manslaughter; by contrast, 53.1% are black, according to the FBI’s publication “Crime in the United States.” (The 44.2% figure is for all whites, not just non-Hispanic whites).

So Omar was wrong. But a small number of progressives have defended her claim without citing any evidence or sources to back it up. Columnist Cliston Brown of the Observer claimed that “statistically, she’s correct” — without explaining why he believes this, or what statistics support Omar’s claim.

Whites aren’t responsible for a disproportionate share of mass shootings or terrorism, either. The liberal publication Slate recognized this back in 2017. As Slate’s Daniel Engber noted, “Mass shooters aren’t disproportionately white,” and “white people” are not “overrepresented among mass shooters.” As I pointed out in 2013 in the Philadelphia Daily News:

Given that 77% of all Americans are white, it is not surprising that mass shooters are also often white.

White people don’t have a monopoly on terrorism, either. Two of the world’s three most violent terrorist groups — Boko Haram and al-Shabab — are African. The bloodiest terrorist group in the world in several recent years was Boko Haram, a violent Nigerian sect. That African terrorist group has killed countless thousands of people, including burning students alive and abducting many girls, and laid waste to entire regions in Nigeria, Africa’s most populous country.

We have to stop demonizing people and realize the biggest terror threat in this country is white men … and we have to start doing something about them.

In 2013, two progressive researchers funded by taxpayers published an op-ed in the Washington Post falsely claiming that “nearly all of the mass shootings in this country in recent years … have been committed by white men and boys.” It was odd that the Washington Post chose to publish that op-ed, given the fact that its whole premise was wrong and the reality that many if not most of the mass killings in the Washington, D.C. area had been committed by minorities — such as Beltway Sniper John Muhammad.

Omar’s claim was simply racist. Some progressives falsely claim that only whites can be racist, and that non-whites such as Omar cannot be. This claim not only is contradicted by dictionary definitions of racism, which do not exempt certain races, but also is at odds with a long line of court rulings recognizing that non-whites can indeed be racist and can accordingly be held liable under civil-rights laws when they subject whites to racial discrimination.

Racial harassment violates federal civil rights laws, even when the victims are white. A unanimous Supreme Court ruling in McDonald v. Santa Fe Trail Transportation Company (1976), held that all races — including whites – are covered by the civil-rights laws. That ruling, which allowed white employees to challenge their race-based firing, was authored by the Supreme Court’s first black justice, Thurgood Marshall. Civil rights laws forbid racial harassment and violence aimed at whites. For example, federal appeals courts have ruled that employers are liable for racial harassment they allow minorities to commit it against whites, in cases such as Bowen v. Missouri Department of Social Services (2002) and Huckabay v. Moore (1998).