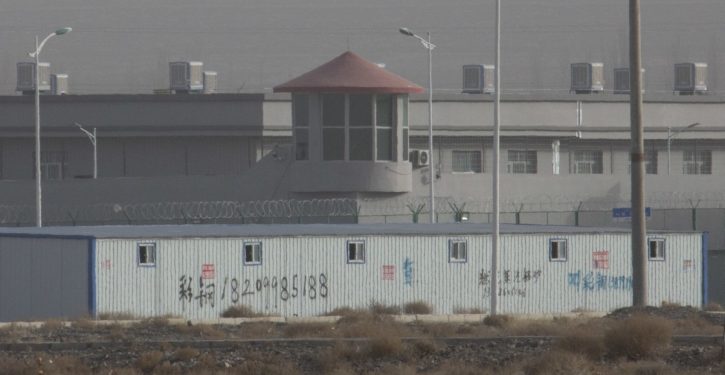 How lovely! Now the Chinese media are quoting Rep. Alexandria Ocasio-Cortez in defense of their human rights abuses at prison-like re-education camps in the western province of Xinjiang.

Newsweek, which should know better, led with the foolish comparison in an article highlighting the abuses suffered by the 1 to 2 million Uyghurs, a Turkic minority ethnic group, who make the far-west province their home:

The re-education centers have also been described as “concentration camps,” and the wider sinicization [forced acceptance of Chinese culture] strategy as “ethnic cleansing.”

The Chinese program runs in tandem with mass surveillance, the destruction of culturally important buildings like mosques, and the reconstruction of towns and cities to make residents easier to track and control.

China Daily, a state-run newspaper owned and operated by the Communist Party’s propaganda arm, ran an editorial slamming Secretary of State Mike Pompeo, who, Reuters reports, “called China’s treatment of its Uighur Muslim minority the ‘stain of the century.'” The editorial struck back, accusing Pompeo and the U.S. at large of ignorance and hypocrisy.

Generally, the mainstream media disregard such rank propaganda, but Newsweek chose instead to milk it for all its worth. The magazine even takes its own shots at the Trump administration, reporting:

Maybe the powers that be at Newsweek are hoping that if a Democrat wins the presidency in 2020, such irresponsible and blatantly distorted journalism will give the magazine a crack at becoming America’s state-run news source.

Omar: Dual loyalty for me but not for thee
Next Post
Ted Cruz, Bill Cassidy file resolution to designate Antifa domestic terrorist organization