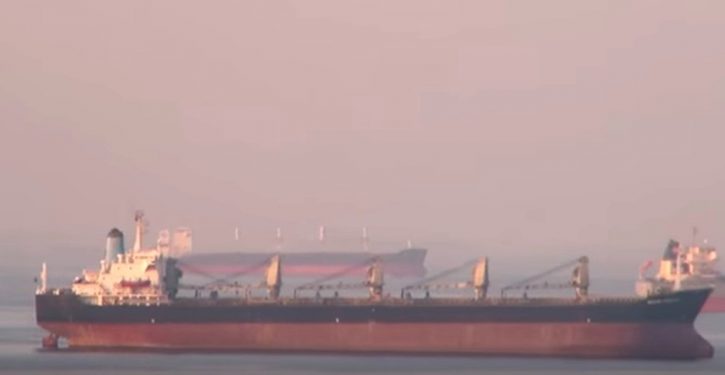 Spoiler up front: we may not be as near hot lead as media reporting suggests.

As reporting settles out, it now appears that there were two foreign ships detained by Iran in the Strait of Hormuz on Friday, both UK-owned.  One, the Steno Impero, is UK-flagged.  The other is the Mesdar, which is Liberian-flagged.

Earlier reports circulating in TV broadcasts and social media suggested there were three ships newly detained on Friday, apparently because it was not widely understood that one of the two UK tankers was the Liberian-flagged ship.

If that turns out to be an incorrect reckoning, I’ll get it repaired.  The Friday detentions are in addition to the one Iran claimed on Thursday: detention of the small tanker Riah, which occurred on Sunday 14 July.

As of midnight on the U.S. East coast, the Steno Impero is still impounded, but the Mesdar was released earlier by Iran.  [*Update*:  As so often in the last few weeks, Iran has suddenly decided to add a detail to the story on this.  If it were actually true, there can be zero accounting for why it wasn’t mentioned before, as it would have been known from the beginning, and would have been the most important element of the event.  Iran now claims, almost a full day after the initial report of detention, that Steno Impero collided with an Iranian fishing vessel and then failed to stop for Iranian authorities.  A hilarious attempt to weight the narrative, frankly.]

I assume this is because Mesdar flies the Liberian flag.  Iran’s point is to seize and hold a tanker flying the flag of the United Kingdom.  That is Tehran’s purpose because the UK performed the takedown of Grace 1, the paper-owned, Panamanian-flagged (but probably Iranian-controlled) tanker carrying Iranian crude oil, impounded in Gibraltar on 4 July.

It’s also because British policy is key in Iran’s pursuit of a separate agreement with the EU-3 powers – the UK, France, and Germany – to undermine U.S. sanctions.

Seizing the Steno Impero is an attempt at extortion, of course.  But the method is noteworthy.  As much as the media are talking about the possibility of strikes on Iran because tankers are being detained, I’m not so sure that’s going to happen.

The reason is something I actually previewed years ago, in an article from 2010 published just after Iran had conducted a major exercise.  During the exercise, Iran reportedly practiced stopping and detaining merchant shipping in the Strait of Hormuz.

The important feature of the exercise was the pretext on which Iran practiced these skills: regulatory enforcement in Tehran’s Exclusive Economic Zone (and/or 24-nautical mile “contiguous zone,” extending 12 nautical miles past territorial waters from the Iranian coastline).

By the UN Convention on Law of the Sea (UNCLOS), a littoral nation is empowered to perform such enforcement for certain types of regulations.  The regulations can be exclusively national ones out to the 24 NM contiguous zone limit, although there are conventionally some restrictions on that authority.  Beyond 24 NM, UNCLOS recognizes a right to enforce the regulations approved by international agreement in the EEZ.  In other words, each littoral nation is the enforcement authority in its EEZ for the internationally adopted regulations.

Iran is not a signatory to UNCLOS, but a member state of the UN doesn’t have to be a signatory to use the authority conferred on littoral nations by the convention.

The point of my article in 2010 was that Iran could use this authority as a pretext for harassing shipping in the Strait of Hormuz and Persian Gulf.  And that’s what the regime appears to be doing.

The New York Times quotes the Iranians on why they seized Steno Impero:

The [Iranian] news agencies quoted the Guards as saying the tanker had “violated three international naval regulations,” including turning off a GPS locator, breaking the traffic pattern in the Strait of Hormuz and polluting the water by dumping crude oil residue.

By citing regulatory infractions, Iran turns the seizure into an enforcement action, one that’s authorized by UNCLOS.

If nothing else, the regime will probably try to demand a monetary payoff from the owners to get the tanker back.  That would retaliate for the ship Sea Shark with Iranian crude, stranded since November 2018 with a huge unpaid fine, in a Red Sea anchorage off Egypt’s coast.  (LU link for Grace 1, above.)

But as long as Iran is observing the forms of regulatory enforcement for the detention, there’s really not a pretext here for conducting military strikes on Iranian targets.  At most, there’s gray area surrounding the authority Iran is invoking.

Drone of the day

That doesn’t mean no strikes are being conducted, however.  At the same time Iran was seizing the British tankers, less-heralded reporting came through from Iraq of a drone attack on an Iran-backed militia’s weapons cache northeast of Baghdad. (H/t: Matthew Brodsky of the Security Studies Group)

There has been hardly any reporting on this, so the details are sketchy.  According to the Iraqi military (i.e., the national army), the target was the “base” of the Shia Al-Shuhada militia in the Amerli region north of Baghdad (see map).  The militia command structure (of the Hashd al-Shaabi) claims multiple casualties – one dead and two wounded – in the attack, which was conducted by an unidentified drone.

Hezbollah, which is deeply embedded with the Shia militias in Iraq, blames the U.S. and/or Israel.

It is interesting that all the Iraqi sources are calling the attack platform an “unidentified” drone.  If it was a U.S. drone operating in the usual way over Iraq, they would actually all be pretty sure of that.

The implication can be read here that something new is going on.  There’s not much value in speculating down each possible alley with the limited information available.

Of particular significance, however, the i24 report has this nugget:

The Saudi-based al-Arabiya network said the base had recently received Iranian ballistic missiles, hidden inside trucks.

That would go to motive, for an attacker.

But it also highlights a second significant feature of this event, and that’s the location.  Assuming the report about the missile delivery is valid, it indicates a new area of Iraq potentially being developed as a rear echelon for Iranian power projection to the west and south.

The map shows the corridors that have already been militarized in that regard.  Iran has been developing the ancient corridor from the Plain of Zahab to Baghdad since at least 2014, and pushing across from the Bashmaq-Penjwen crossing to As-Sulaymaniyah, Kirkuk, and Erbil, to the north, since 2015.  From rolling up Diyala Province – the route to Baghdad – the Iran-backed forces under Qassem Soleimani’s direction pushed north to Tikrit, and west along the Euphrates into Anbar Province, as well.

But the more-traveled roads down those well-worn paths don’t go to Amerli.  You can get from Sarpol-e-Zahab, the great mountain pass that has been the Persian gate to Baghdad for millennia, to Amerli by a fairly direct route.  But it’s a comparative goat path through a less populated mountain backwater.

Perhaps that’s a feature and not a bug at this point.  If the Iran-backed militias are feeling a need to put their rears with the gear further from the convenience of the well-traveled transportation infrastructure, that’s a good thing – especially in the Diyala Province redoubt, which Soleimani marked as his territory back in 2014-15.

It suggests there is more going on behind Iran’s capers on a hot skillet than the public sees at the moment.  Stay tuned on this one.

Another unruly migrant rush at border, this time at international bridge to McAllen, TX
Next Post
Poll says: The world’s most admired woman is …