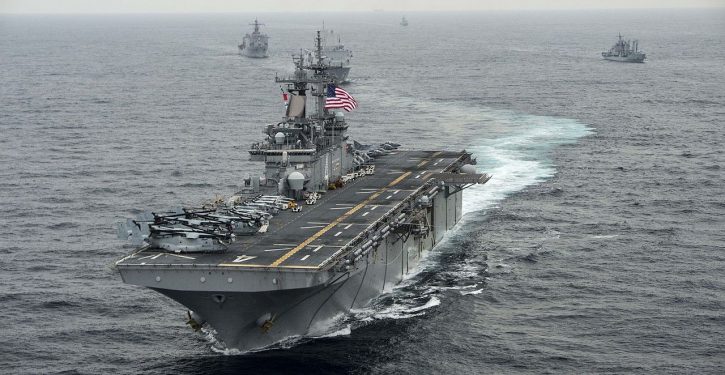 Start with the drone first.  The USS Boxer (LHD-4)/11 MEU Expeditionary Strike Group (ESG), which deployed from San Diego on 1 May, entered the Persian Gulf through the Strait of Hormuz on Thursday, and according to a statement delivered personally by President Trump, an Iranian drone that approached too closely was shot down in the process (video of Trump’s statement below).

That would be a first.  It’s not the first time an Iranian drone has flown too close to one of our warships.  An Iranian drone was allowed to literally overfly – operate directly overhead – the carrier USS Harry S Truman (CVN-75) on 12 January 2016, the same day the U.S. Navy patrol boats were seized by Iran and the crew held at gunpoint.  (In the Obama years, an Iranian P-3C Orion surveillance aircraft was also allowed to overfly one of our carriers, USS Abraham Lincoln (CVN-72), in 2012.)

But it seems Trump is having no more of that sort of thing.  It’s noteworthy that he made the announcement about the drone himself.  Clearly he wants to emphasize it as a U.S. posture.

The Boxer took defensive action against an Iranian drone, which had closed into a very, very near distance, approximately 1000 yards, ignoring multiple calls to stand down and was threatening the safety of the ship and the ship’s crew.

It’s very interesting that he refers here to the Boxer (or someone in the transiting task group) making “multiple calls to stand down.”  You can’t talk to a drone.  You have to talk to the drone’s controller.  This wording from Trump suggests the Navy was either in contact with the controller, or was simply broadcasting warnings on a VHF channel universally monitored in the Gulf.  (I’m inclined to think it was the latter, although we probably did know who the controller was.)

I wrote about that concern with drones after the overflight of Truman in 2016:

The key factor with a drone is that the ship it’s flying near can’t [verifiably] contact the controller by voice.  This might not be what occurs to most people thinking about the problem, but it’s the reason why we can’t let overflight by drones become commonplace.

With an Iranian P-3, the aircraft can be hailed on a VHF voice channel that both the ship and the aircraft will be monitoring.  The same is true of the helicopters and smaller aircraft, both military and civil, that fly around in the Persian Gulf all the time.  These aircraft can all be contacted and warned off if they come too close. …

But there’s no way to talk a drone out of your air space.  The options are to tolerate them or prohibit them.  Tolerating them over our warships is not a viable option; there is no way to keep that policy from spiraling out of control.

My conclusion at the time took into account the possibility of armed drones, which is something Iran proved she has developed and will try to use.  An Iranian drone-bomb launched from Syria penetrated Israeli airspace in February 2018 and was shot down by an Israeli helicopter.  Proxy forces backed by Iran – in Yemen and reportedly in southern Iraq – appear to have used similar devices against targets in Saudi Arabia in the last two months.

It isn’t always possible to be sure a drone is unarmed, for that matter.  Given a drone type, you have to have visual contact with it to be certain, and in many cases, it would be more cost-effective to just shoot a drone down preemptively than to scramble a response aircraft to take a look at it.  A drone may or may not be armed, but by definition, it is unmanned.  No humans are harmed when one is shot down. …

[Y]ou can’t negotiate a perimeter with a drone.  That’s why we will probably have to shoot one down at some point — or take a hit ourselves.

“Some point” has arrived.  Iran, of course, shot down our unmanned Global Hawk surveillance aircraft on 20 June.  But shooting down the Iranian drone on 18 July wasn’t a tit-for-tat action.  It would have been taken because there have been attacks in the theater with explosive-laden drones in recent weeks, and the drones can’t be allowed to approach our ships under any circumstances.

The shootdown was reportedly accomplished with a Marine Corps system deployed with the 11th Marine Expeditionary Unit (11 MEU), embarked in the ships of the Boxer ESG.  It’s part of the Marines’ Light Marine Air Defense Integrated System (LMADIS), and uses radio frequency to jam the drone’s communications with its controller, causing the drone to crash.

Military.com says it confirmed this with an unnamed defense official, and that the system was used from a perch on the Boxer (where the LMADIS assembly would be stowed and available for use).

There has been a lot of talk of a “laser system” being involved, but this appears to be a point of confusion in the media.  Prototype laser systems have deployed to the Gulf before, most notably with amphibious ship USS Ponce (formerly LPD-15), which was testing the system (LaWS) in 2014. (Ponce had been reconfigured as an Afloat Forward Staging Base, AFSB-1, in 2012, and had some excellent adventures more recently prior to her decommissioning in 2017.)

But none of the ships in the Boxer group (which include USS John P. Murtha (LPD-26) and USS Harpers Ferry (LSD-49)) is known to have a laser anti-air system.  It’s not certain from the reporting I’ve seen which Aegis escort the ESG ships may have had going through the strait, but a quick run with a search engine doesn’t turn up any Arleigh Burkes in theater known to be deployed with a laser prototype.*

Bottom line: the good word looks to be the reporting from Military.com.  One more comment on the event in the Strait of Hormuz: it would have been of particular interest for Iran to see the entire ESG entering the Gulf.  (Media reporting from embarked journalists over the last few days has indicated the ESG is operating together, and the same embarked media appeared to indicate the whole ESG went through on Thursday.)

For more than a decade, amphibious groups have routinely split up and roamed the CENTCOM theater as singletons, participating in exercises and operations, showing the flag, and otherwise being present, but for the most part not assembled as a fighting force.  The whole Boxer/11 MEU ESG coming through the SOH at once is more than a token of presence; it’s a show of force.

Iran claims to have seized a tanker

Meanwhile, Iran now claims to have seized the missing tanker LU carried a Web Crawler headline on earlier this week, the Riah.  At the time, the U.S. suspected Iran of seizing the ship on 14 July, after it stopped transmitting its position just inside the Persian Gulf.

Riah is a small tanker suitable for moving small cargos around coastal areas.  Her ownership is murky; as discussed in the comments at the Web Crawler, it looks like the on-paper scheme typical of the sanctions-busters operated by Iran.

On paper, the ship was at one time owned by a UAE-based company, but was supposedly sold in 2018 to a company that isn’t known to own any ships.  The latest reporting (WSJ, above) suggests the ownership front might map to Iraq – but that too would call up multiple sanctions-evasion possibilities, including control through an entity in Iraq run by the Iranian Qods force, the elite element of the IRGC.

There would be nothing new about any of this.  Frankly, I consider the most likely scenario to be that Iran has controlled the Riah all along, and the “seizure,” which wasn’t announced by Iran until 18 July, four days after the U.S. raised the issue of Riah’s diversion into Iranian waters, is a ruse to obscure that fact.

During the 12 years of UN sanctions on Saddam’s regime in Iraq (1991-2003), the Iranian IRGCN – the Revolutionary Guard navy – controlled a coastal tanker operation that cooperated in the sanctions-busting effort, and made hundreds of millions of dollars off of it.  The logistics of that operation involved Iranian coastal tankers performing at-sea transfers with Iraqi craft, and then smaller vessels plying the waters between Iran’s southern Gulf islands and the UAE to move the cargo onward.  It was time-consuming and inelegant, but it kept Saddam afloat and made the IRGCN a lot of money.

The open-source Tanker Trackers group posted an image of Riah’s repeated forays back and forth through the Strait of Hormuz over the last year (coinciding with when the tanker was sold to the mysterious, possibly Iraq-connected entity), followed by the final diversion on 14 July into Iranian waters.

RIAH is a fairly small tanker waving??. AIS shows that she's been shuttling back and forth between both coasts over past year for fueling other vessels. On July 14 2019 she crossed into Iranian waters for the 1st time as she slowed down. AIS ended there. No tugboats nearby. #OOTT pic.twitter.com/s3pBXlK4Oe

Iran watches the SOH too closely to be ignorant of what Riah has been doing, and is far more likely to have been in charge of it than to be surprised by Riah’s turn to the north on her final approach.

The point here is not that Riah’s activities would exactly mirror the profile of the old Saddam-era sanctions-busting effort. Obviously they don’t.

Rather, it’s that I’d recommend analyzing Riah’s recent history on the theory that she’s an Iranian asset, because it may all fall into place that way.  One of the most important features of her profile is that no one else — unalerted — would know she’s controlled by Iran while she’s shuttling around the UAE from one side to the other.  She could do at-sea transfers frequently and not be suspected, especially if she’s transferring refined fuel that won’t carry identifying chemical markers tracing back to Iran.

A question to start with: are there gaps in Riah‘s track over the past year?  If so, they could correspond to previous diversions into Iranian waters, with AIS off.  Alternatively, Riah could be picking up newly arrived sanctioned cargo during stops off the UAE’s west coast.

Running such an operation through a Qods-controlled front in Iraq would add a baffle or two to obscure its command structure.  The small-cargos profile definitely loses economies of scale, making Iran work a lot harder to sell petroleum products.  But if Riah has been doing that, there are probably others.  The IRGCN knows how to run this particular railroad.

* A contract was awarded in March 2019 to begin deploying the Navy’s HELIOS laser system on the Arleigh Burke destroyers with an operational fleet roll-out to be in 2021.  The San Antonio-class LPDs, like USS John P. Murtha, are to get a separate laser system, the Dazzler, starting this year, with USS Portland (LPD-27).