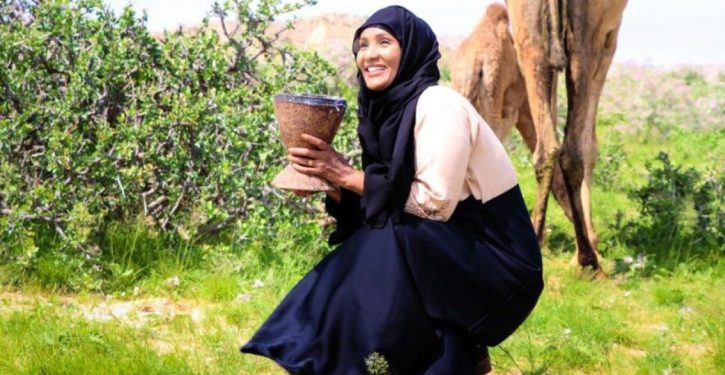 Who said Somalia is a sh*thole? Not Ilhan Omar, even though her family fled the country when she was ten to escape the war. And certainly not Hodan Nalayeh, whose family emigrated to Canada for much the same reason when she was 12.

In fact, so determined was Nalayeh, now a journalist, to paint a positive picture of her homeland — to share “a side of Somalia rarely depicted in the West,” in the words of The Washington Post — that she headed back recently precisely to make that point:

On Twitter, she posted photos of young boys grinning on the island of Ilisi, fresh fish and lobsters pulled straight from the Indian Ocean and a colorful sunset from the port city of Kismayo.

It was an incredible day to witness #Somalia’s beauty on the island of #Ilisi ? #Kismayo #Somalia #MySomalia pic.twitter.com/KRr0AgGgtK

But this past Friday, things went terribly wrong. Members of the terrorist group al-Shabab stormed the Asasey Hotel in Kismayo, where Nalayeh and her husband, Farid Jama Suleiman, were staying. The couple was among the 26 fatalities stemming from the attack.

An additional 56 people were wounded. It took around 14 hours for Somali security forces to regain control of the hotel, where several tribal elders and another journalist, Mohamed Sahal Omar, were also killed. At least one American was among the dead, the State Department confirmed.

The irony is that during Nalayeh’s brief visit, her mission was greeted with optimism and high praise. One follower of hers on Twitter wrote:

Your are doing amazing work in countering the doom narrative propagated by many about Somalia, one tweet at a time

A Somali writer commended likewise her efforts to portray an image of the country radically different from the stereotype of “victims trapped in a vicious circle of conflicts.”

Sometimes, sadly, a cigar is just a cigar.