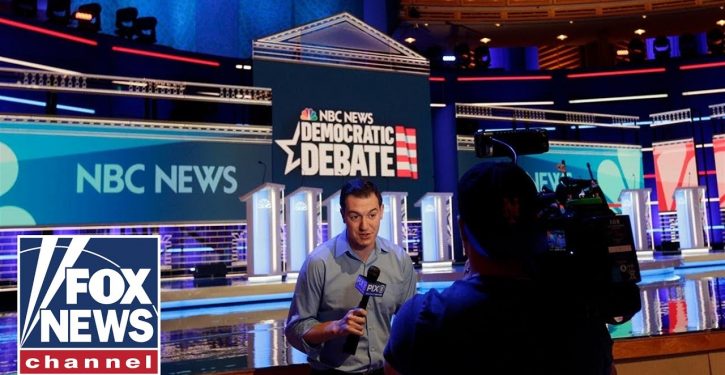 Si usted puede leer esto… That’s “If you can read this.” If you can’t, you would have been lost eight different times watching last night’s Democratic debate on NBC.

The first candidate to hispander was Beto O’Rourke, who suddenly and inexplicably lapsed into Spanish while fielding a question on whether he supports a 70% tax on those in America making more than $10 million. It almost seemed at first as if O’Rourke had begun speaking in tongues.

At one point the camera panned back to show Sen. Cory Booker wearing what appeared to be a classic Whiskey Tango Foxtrot expression, but it turns out it was actually an “aw shucks, why didn’t I think of that first?” face. You see Booker also habla español, as he later explained in an interview with MSBNC’s Chris Matthews:

CHRIS MATTHEWS: Well, I wasn’t ready for this, senator, but when people went to their bilingualism tonight, I’m always impressed because I’m terrible with languages. People were talking about your expression when Beto went to Spanish.
CORY BOOKER: He threw down the gauntlet and I had to respond. There are a number of bilingual people on that stage and it was Beto —
MATTHEWS: Your look on there, ‘What the heck is going on here?’ I just think it’s interesting. I guess this is going to progress now.
BOOKER: Well, you know, I was listening to him, and I was like, ‘Okay, fine. It’s good that he’s showing that. We all need to.’

As Booker acknowledged in a tweet back in June, he learned Spanish while in Ecuador.

Ecuador is where I did my immersion Spanish language study. Lived with a family and really improved my abilidad. https://t.co/jULwOUcrSd

Julian Castro, who was born to Mexican immigrants to the U.S. and hence grew up in a bilingual household, was evidently too embarrassed to play along, though moderator Jose Diaz-Balart took the bait.

Frontrunner Elizabeth Warren didn’t speak Spanish, but she did hispander big time by underscoring that, as president, she would call for open borders, a policy also embraced by Castro. In a statement to the HuffPost on Tuesday, Warren said:

We should not be criminalizing mamas and babies trying to flee violence at home or trying to build a better future. We must pass comprehensive immigration reform that is in line with our values, creates a pathway to citizenship for undocumented immigrants including our DREAMers, and protects our borders.

(Note to The New York Times, which exactly a year ago today published a “fact check of the day” headlined “No, Democrats Don’t Want ‘Open Borders’” and going on to suggest “President Trump has falsely claimed at least two dozen times since taking office that Democrats want to open American borders”: You may want to publish a retraction.)

I close with a factoid: Of the U.S. population, 41 million — 12.5% — are native speakers of Spanish. Another 11.6 million people are bilingual. The rest speak English as a first language.

Reviews are in: Ocasio-Cortez’s acting debut on the border in Tornillo, Texas
Next Post
Prosecutor endorsed by AOC wants shorter sentences for violent crimes, or no jail time at all