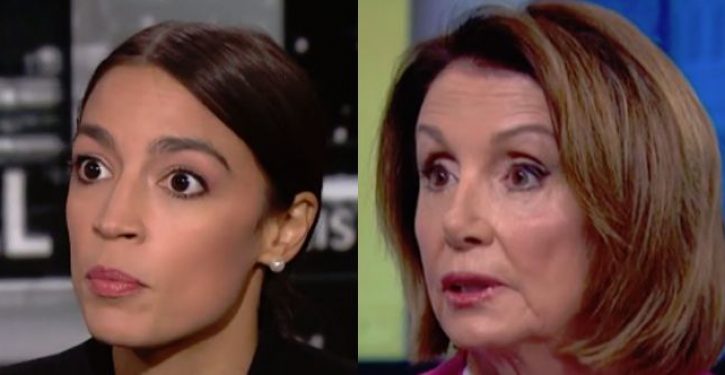 If Donald Trump is re-elected in 2020, it will be in part because the Left has not yet figured out how to control the three loose cannons who were sworn in as members of Congress this past January. We saw this in March when freshman Rep. Ilhan Omar spewed anti-Semitic tropes both on the floor of the House and on social media. Rather than formally reprimand her, as the situation warranted, the Democratic-led House passed a meaningless resolution condemning all “hateful expressions of intolerance,” which seemed to reward, rather than punish, Omar for her hateful remarks. Jews, who routinely vote Democratic, were shocked and horrified.

They are shocked and horrified again, along with countless other Americans, now that House Speaker Nancy Pelosi has chosen to sit on her thumbs in the wake of Rep. Alexandria Ocasio-Cortez’s outrageous claim that the Trump administration is running concentration camps on the southern border. This morning Pelosi was asked point blank at a Christian Science Monitor breakfast in Washington whether she would condemn the freshman congresswoman’s slur on Holocaust victims and their families. Her answer was to suggest that Ocasio-Cortez’s comment has somehow been “misrepresented.” Watch:

As with her previous bombshells, the self-styled Democratic socialist has made the charge much worse by attempting to split hairs, maintaining that there is a difference between concentration camps and death camps. Appearing last night on Fox News Channel’s “Ingraham Angle,” conservative commentator Victor Davis Hanson called this a distinction without a difference, noting that more than a million Jews were murdered at Auschwitz, which was considered a concentration camp.

In the old days when Congress failed to rein in one of its own, Americans could rely on the media to set the record straight, but that is no longer the case either. As J.E. Dyer wrote, on Tuesday CNN contributor Angela Rye doubled down on Ocasio-Cortez’s idiocy, boldly asserting that the endgame on the border is in fact death camps.

Viewers of that network hoping for a little sanity in subsequent programming were disappointed when anchor Don Lemon compared Trump directly to Adolf Hitler:

Think about Hitler. Think about any of those people. … [I]f you could look back in history, would you say, ‘Well, I’m so glad that person was allowed a platform so that they could spread their hate and propaganda and lies,’ or would you say, ‘That probably wasn’t the right thing to do to spread that because you knew in that moment that was a bad person and they were doing bad things. And not only were they hurting people, they were killing people.

The really frightening thought to consider is what action extremists on the Left might take if Trump is in fact re-elected. Will Rye or Lemon or a surrogate decide that the new “Hitler” needs to be eliminated?