It’s time for another of Rep. Alexandria Ocasio-Cortez’s Instagram sermons. For this performance, she appears wearing a sleeveless shirt with the caption “Rematriate the Land.” You may have to struggle to make out the words since the image appears reversed, as though the genius recorded herself in a mirror.

The subject this time is the situation on the southern border, a favorite topic of hers, but this time she doesn’t merely accuse the Trump administration of killing or caging migrant children. This time she accuses the Trump of operating concentration camps.

The video appears below, followed by the transcript.

The United States is running concentration camps on our southern border and that is exactly what they are. They are concentration camps. And if that doesn’t bother you, I don’t — I got nothing — I like, we can have, ok, whatever. I want to talk to the people that are concerned enough with humanity to say that we should not— that ‘never again’ means something, and that the fact that concentration camps are now an institutionalized practice in the home of the free is extraordinarily disturbing,  and we need to do something about it. This week, children, immigrant children were moved to the same internment camps where the Japanese were held in the early, in the earlier 20th century. And this is, this is not even about a crisis for, this is not just about the immigrant communities being held in concentration camps being a crisis, this is a crisis for ourselves. This is a crisis on if America will remain America in its actual principles and values, or if we are losing to an authoritarian and fascist presidency. And so I think that that is, you know, I don’t use those words lightly, I don’t use those words to just throw bombs, I use that word because that is what an administration that creates concentration camps is. And a presidency that creates concentration camps is fascist.

Not content to make an ignorant assertion by comparing illegal border crossers to the millions of Jewish families that were crammed into boxcars and sent to their death in gas chambers, she adds:

And for the shrieking Republicans who don’t know the difference: concentration camps are not the same as death camps.

Concentration camps are considered by experts as “the mass detention of civilians without trial.”

But don’t take Ocasio-Cortez’s word for it. She has the backing of an “expert” in the person of Andrea Pitzer, who has authored a book titled “One Long Night: A Global History of Concentration Camps.” Her other writing credentials include bylines in such scholarly publications as Slate and USA Today.

And for the shrieking Republicans who don’t know the difference: concentration camps are not the same as death camps.

Concentration camps are considered by experts as “the mass detention of civilians without trial.”

And that’s exactly what this administration is doing.

Frequent LU contributor Jeff Dunetz idetifies the root of Ocasio-Cortez’s outrageous and totally baseless claim, noting a plan by the Department of Health and Human Services to use Fort Sill, an Army base in Oklahoma, to hold the growing numbers of migrant children after space in government shelters is depleted.

Health and Human Services said in a statement that it has taken about 40,900 children into custody through April 30. That’s a 57% increase from last year, which is a rate on-pace to surpass the record figures in 2016 when 59,171 minors were taken into custody.

And there you have it. Dunetz goes on to note that the concentration camp claim “is not only hyperbolic but cheapens the memory” of the real horrors to which millions of people, including six million Jews, were exposed.

Ocasio-Cortez should be sanctioned by House leaders for her ugly analogy. 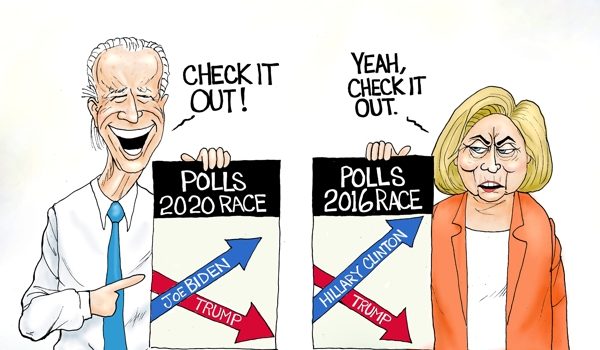 Cartoon of the Day: In the bag
Next Post
A highly gentrified D.C. neighborhood is home to a deadly gang war