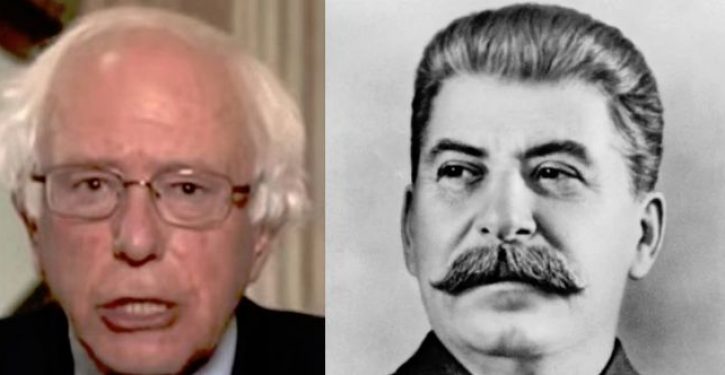 There has been much written about former Vice President Joe Biden’s plagiarism … er, “agreement” with previously published opinions on climate change.

But apparently Biden isn’t the only the candidate for the Democratic nomination to “recycle” previously disseminated ideas without proper attribution. Vermont Sen. Bernie Sanders is also a member of the copycat club. But unlike Biden, who has lifted passages from speeches by John F. Kennedy and his late brother, Sen. Robert F. Kennedy, among other notable Americans, Sanders chose to parrot a source that many voters might have  no appetite for. That historical figure is Russian dictator and communist leader Joseph Vissarionovich Stalin.

Even with the growing enthusiasm, at least in theory, for socialism in the U.S. in recent years, Americans may not be ready for full-throated communism. Which is perhaps why Sanders, in proposing his Twenty-First Century Economic Bill of Rights during a speech last Wednesday, neglected to mention that much of it closely resembles ideas embodied in Stalin’s 1936 Soviet Constitution.

Here, via RedState, are the six basic tenets of Sanders’s economic bill of rights:

In his speech, Sanders affirmed that “every American, regardless of his or her income [is] entitled” to these rights.

Now here are corresponding passages from Stalin’s constitution for the USSR (emphasis per RedState):

ARTICLE 118. Citizens of the U.S.S.R. have the right to work, that is, are guaranteed the right to employment and payment for their work in accordance with its quantity and quality.

ARTICLE 120. Citizens of the U.S.S.R. have the right to maintenance in old age and also in case of sickness or loss of capacity to work. This right is ensured by the extensive development of social insurance of workers and employees at state expense, free medical service for the working people and the provision of a wide network of health resorts for the use of the working people.

ARTICLE 121. Citizens of the U.S.S.R. have the right to education.This right is ensured by universal, compulsory elementary education; by education, including higher education, being free of charge. …

The one detail Sanders omitted about his grand plan, along with its provenance, is how he proposes paying for these “rights.”

Mexico reveals additional details of immigration deal with Trump
Next Post
MLB announcer blames rise in home runs on (what else?) global warming