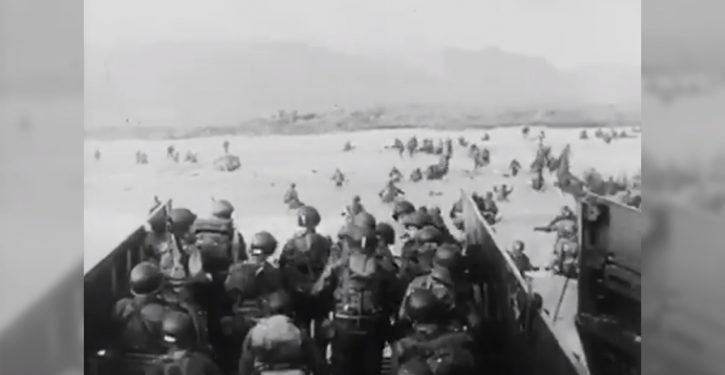 For some reason, in the pre-dawn hours on the West coast, I was unable to sleep this morning and ended up watching Theresa May, Emanuel Macron, and Donald Trump give their D-Day commemoration speeches live.  I’m glad it turned out that way.  If I were watching the speeches on recorded video later, I might have watched only Trump’s – and perhaps not all of his, as the video runs to a rather daunting 27 minutes.

But I did see them all, along with the 21-gun salute afterward, and the playing of Taps.  They were fine speeches. Inevitably, perhaps, Macron’s at the joint commemoration with the Americans had to include some rebuke language about unity (or implicit peril thereto), but we got through the passage lightly enough.  May and the British veterans were inaugurating a new British memorial at Ver-sur-Mer, and she acquitted herself well. There was a windswept grace in the smaller, less fanfare-enhanced ceremony.

I wasn’t sure, when Trump’s speech took a turn toward celebrating the positives in America’s current condition, that it would fit the occasion, but it did.  Trump rightly gave the bulk of his time to honoring the men behind him for the courage and commitment it took to mount the invasion on 6 June 1944 into the teeth of German combat strength.  In a rare moment of accord, some of Trump’s severest critics in the U.S. media seemed to mostly think the speech was a good one.

Applause from the crowd seemed to taper off a bit when Trump spoke in laudatory terms of how well America is doing today.  But there are many ways in which America is doing well, and the men in uniform behind him didn’t fight with all they had on that dreadful day in 1944 so that 75 years hence, America could wallow in grievances and ponder how much stink there is if you go sniffing for it hard enough.

Life always affords enough stink to satisfy a bad attitude, if it’s what you want to focus on.  The whole point of liberating France and Europe was to not have to focus on it.  For what it’s worth, it wasn’t only America whose hope and future the Allies fought for in Normandy.  The allies on either side of us that day, who took fire and gave their life’s blood in a tremendous undertaking, weren’t fighting for the right to have a bad attitude either.  They were fighting for the right to have a good one.

You have to fight for the right to have a good attitude.  That is the great lesson of man’s moral nature and liberty.  Men can be forced to live as if they have a bad attitude, but they cannot be forced to have a good one, or to live as if they do.  The life-altering magic of a good attitude can only be allowed.  It will only thunder in us to the good of all we do if we have liberty.

It was up to each national leader to speak for his or her nation, and I’m glad Trump took the time – it was only a few seconds, in fact – to emphasize the good those noble old fighting men endowed us with when they stormed the Normandy beaches 75 years ago.  Our debt to them is incalculable, starting with what freedoms we still have to walk in the fresh breezes of goodness. May that legacy never perish from among us.

I include it partly because it’s the Rosetta Stone for something I wrote in 2014, and reread today.  I find it still applies.  In fact, it has renewed meaning because of the emergency we now face of weaponized government and peril to our liberties.

There is a real sense – in some ways an even more challenging sense – in which the living generations of today face the sheer, forbidding cliffs of a moral and cultural Pointe du Hoc.  In its way, reclaiming the American heritage of freedom, of constitutionalism and limited government for a religious and moral people, is as tremendous and daunting a task as mounting the D-Day invasion.

Every few generations, Americans have embarked on an epic enterprise of breathtaking daring: the kind of enterprise a society of complacent busybodies, one that obsesses over “hate speech” and salt content, would call crazy or irresponsible.  Many Americans today would like to see laws that prohibit precisely the daring of liberty that America has made her name and her fortune exercising.  Such complacency is the sheerest of cliffs, and it has machine-guns all over it, manned by an army of desperate defenders terrified of the unknown.  We may know the cliff has to be scaled, but that doesn’t mean we can see how to do it.

Reagan’s simple narrative is a good start, though.  Throw up a rope ladder and start climbing.  When one man falls, take his place, and keep going.  When a rope is cut, throw up another and start again.  Climb, shoot back, and hold our footing.  Soon, one by one, we’ll pull ourselves over the top, and in seizing the firm land at the top, begin to seize back our heritage and our future.

The boys of Pointe du Hoc didn’t know in advance that their fight would be won.  Neither do we know today whether ours will be.  We don’t know what will symbolize the “daggers” we hack with into the side of the cliff, or whether there will ever be ceremonies to commemorate the “D-Day” that is shaping up for our generations.

But we know whose shoulders we stand on.  And we know, as those forebears did, that we are the ones here, facing the test, and there is no one else.

I include his address also because Reagan’s characteristically uplifting, reassuring demeanor cues us to the good attitude we can aspire to in turmoil.  So much of the turmoil we may perceive around us is fomented and even faked.  It’s our choice whether to let it kill us, or renew in us the spirit of liberty and hope.

Mueller witness had vile videos of children as young as three in acts with goats
Next Post
Ilhan Omar dinged for campaign finance violations, ordered to personally repay campaign thousands