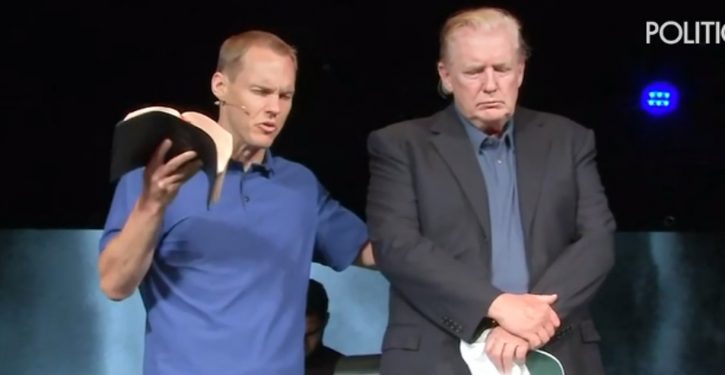 President Trump visited a church in Northern Virginia on Sunday, showing up after a round of golf for an unscheduled visit.  The pastor of McLean Bible Church, David Platt, prayed for the president, which the mainstream media seemed to find … noteworthy.

Before starting the litany of media manipulations – and I’m putting this up top because I want you to see it – here, in his own words, is why the pastor had a specific concern to pray for Trump while Trump was right there in his church (emphasis added):

At the end of my sermon at the 1:00 worship gathering, I stepped to the side for what I thought would be a couple of moments in quiet reflection as we prepared to take the Lord’s Supper. But I was immediately called backstage and told that the President of the United States was on his way to the church, would be there in a matter of minutes, and would like for us to pray for him.

Somehow, this seems to have mostly escaped notice.  For what human soul would Christians gathered in worship not pray when thus requested?  Please name me one. (For that matter — you’ll see why below, or by reading Platt’s letter — ask yourself, if you’re a Christian, whether you want your message to the world to be, “Don’t show up in my church to be prayed for.  I may not like you well enough for that.”)

At any rate, ABC News marked the event with a short AP article stating that “The pastor of a Virginia church has asked God to give President Donald Trump wisdom to lead the country.”

The pastor of a Virginia church has asked God to give President Donald Trump wisdom to lead the country. https://t.co/1GHHV4Kzpv 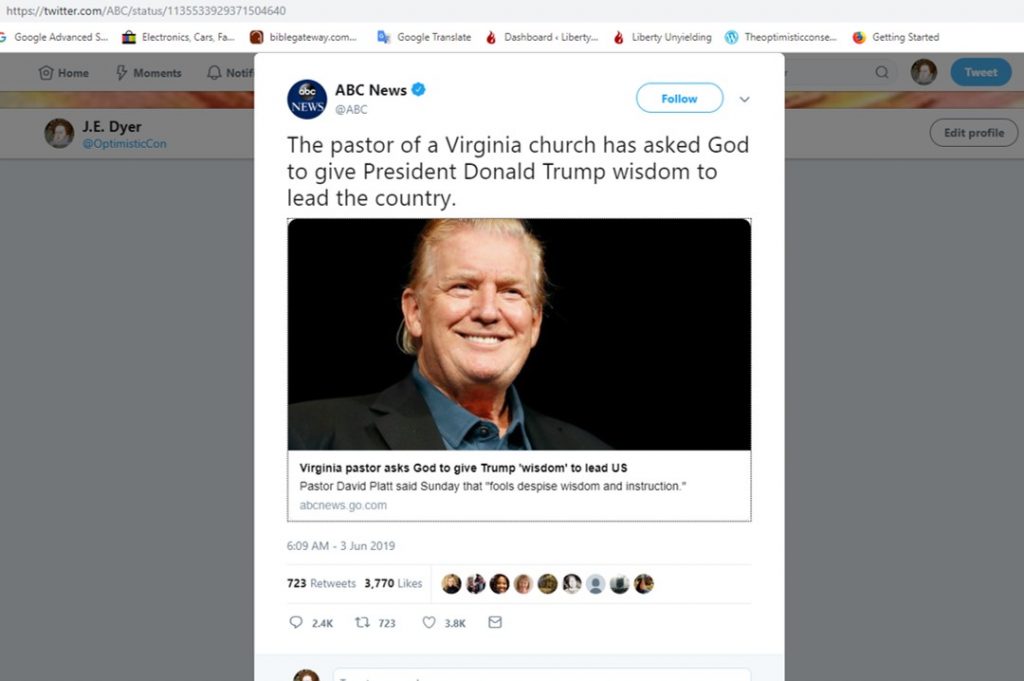 When ABC tweeted the story, a mass reaction ensued across Twitter, as tweeps commented that Christians in thousands of churches across America pray for the president – any president – every week.

I mean… okay? Praying that God will give the leaders of our country wisdom is pretty normal.

During literally every mass of my life the priest has prayed for our local and national leaders during intentions.

This is very common, I am not sure I know of a church that doesn’t do this.

Jewish tweeps chimed in to point out that Jews pray in congregation for the president too.

Both Christians and Jews routinely pray for wisdom and divine guidance and protection for all our civil authorities.  Many of the commenters wondered if reporters and editors really don’t know that.  (As an aside, I remember with a tickle the years when the president went by “Jimmy,” but the pastors leading the congregation in prayer intoned solemnly for “James, our president.” Bill Clinton, likewise, was always “William.”)

At some point, it appears AP (or perhaps ABC, in coordination with AP) felt a bit burned by the vociferous feedback.  And the way we know that is that AP did what you do when you’re feeling burned by vociferous feedback: they changed out their story, at the URL for the original article on the pastor praying for Trump.

Initially, as indicated by archived copies of the “praying pastor” article, the hyperlink to that URL took the reader to the original article entitled “Virginia pastor asks God to give Trump ‘wisdom’ to lead US.” 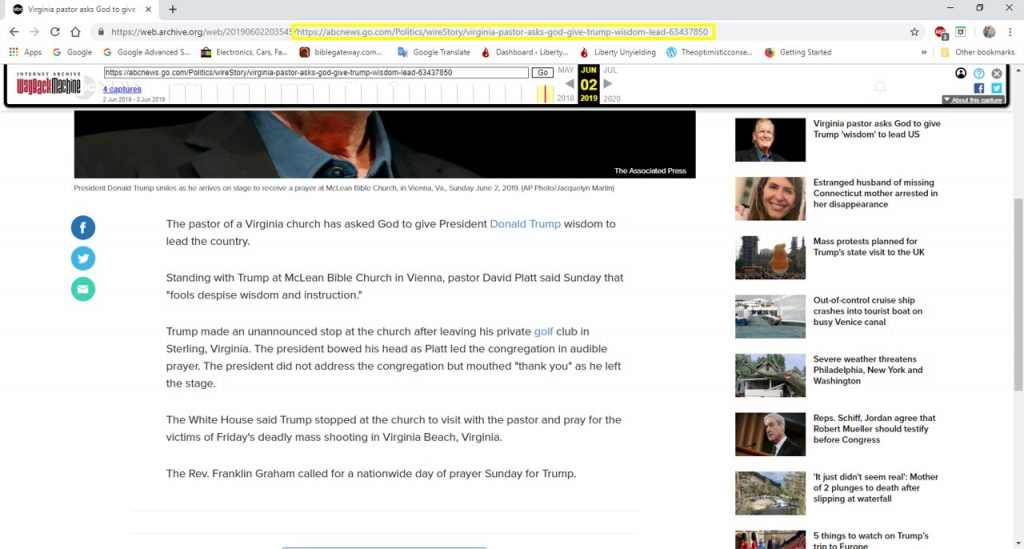 Now the same click, to the same URL, takes the reader to this article: “Trump praises Powell and wife, and humorist Mark Russell.” 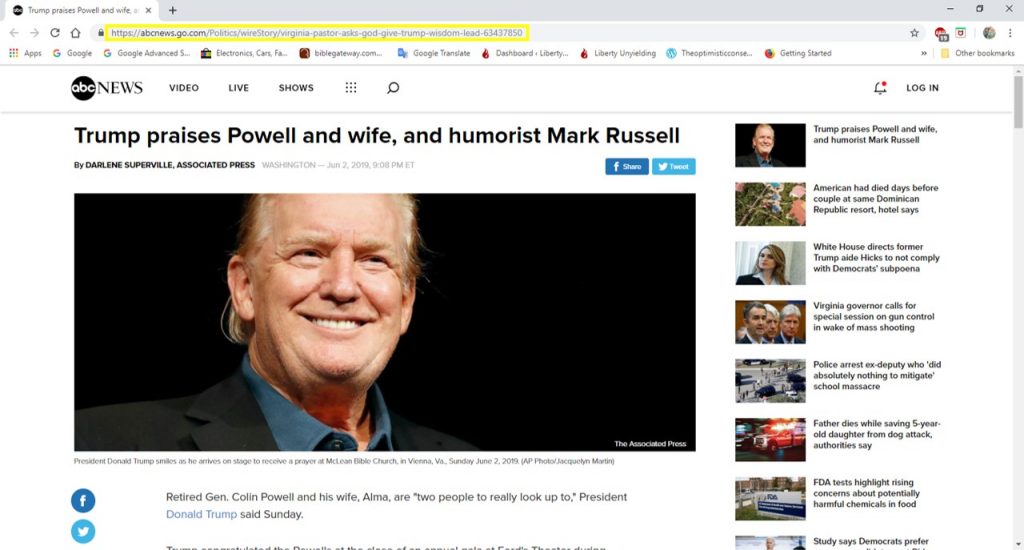 The new article at the old URL is about the completely unrelated topic of a gala dinner Sunday night at Ford’s Theater.

That wasn’t the end of it, however.  Casual Web browsers may have more trouble finding the original ABC/AP article now, but Politico weighed in on Monday with an article claiming in its headline that Pastor Platt had subsequently apologized for praying for Trump.

You wouldn’t know that if you went to the Politico article now, because the headline has been changed.

Madeline Osburn at The Federalist posted a screen capture of the original headline and slug, so we know how it was originally reported.  (Do read her piece for some excellent comments on why Christians pray for our leaders.)

Slug: “The pastor of a Northern Virginia church where President Donald Trump stopped over the weekend has apologized to his congregation after praying for the president during the unscheduled visit.”

The new headline is “Pastor tells congregation why he prayed for Trump.”  In the currently available article, there is no mention of apology.

Oddly enough, the URL has also been changed.  You can still copy the original using the right-click functions at Madeline Osburn’s post:

But as the screen caps below demonstrate, that URL has been changed, although the serial number for the URL remains the same.  This is the new version to which the link from Osburn’s article now takes the reader. 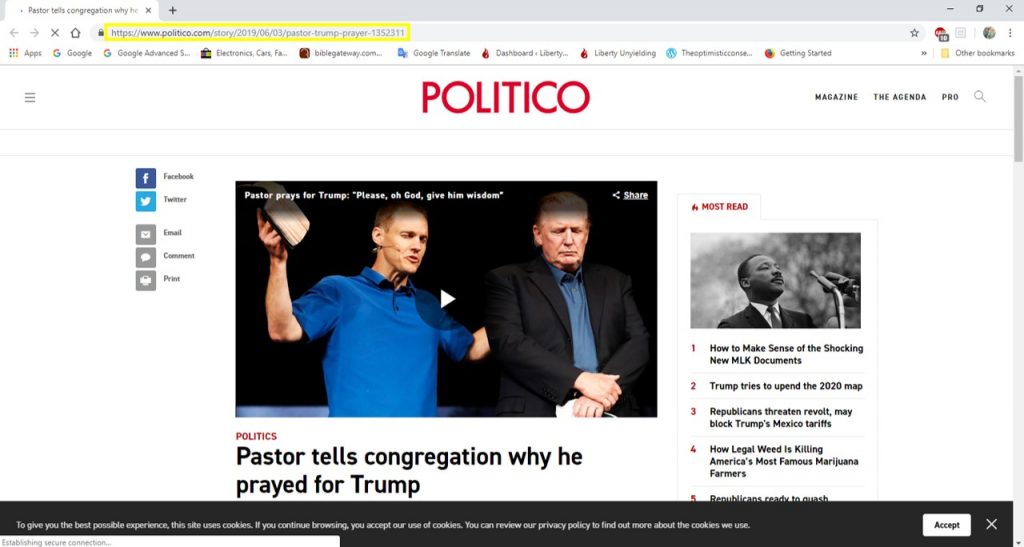 This is the cached version still extant at the results in a Google search on the original headline.  It has the original URL, but the new headline. 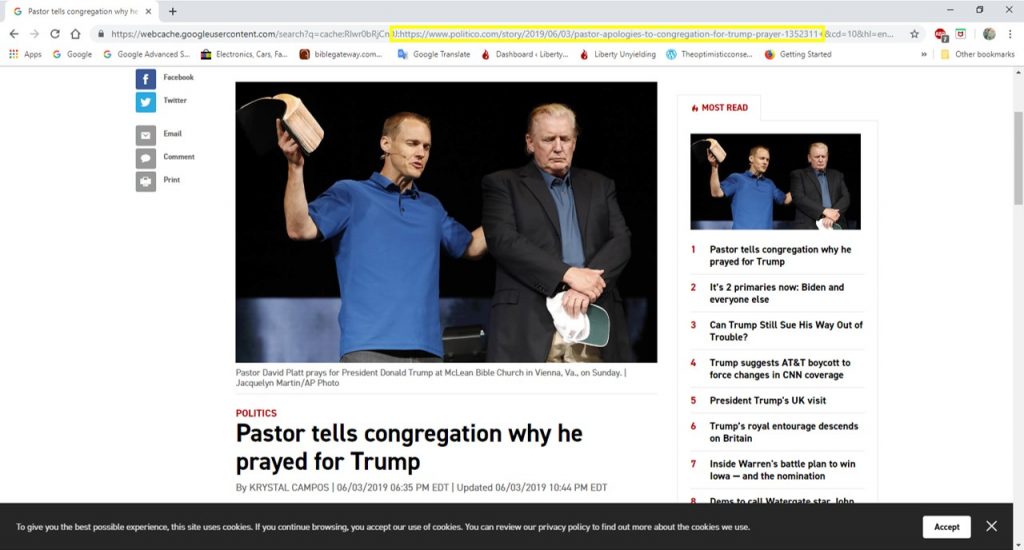 Using the original URL directly – i.e., pasting it into the command line – takes you to the new URL. 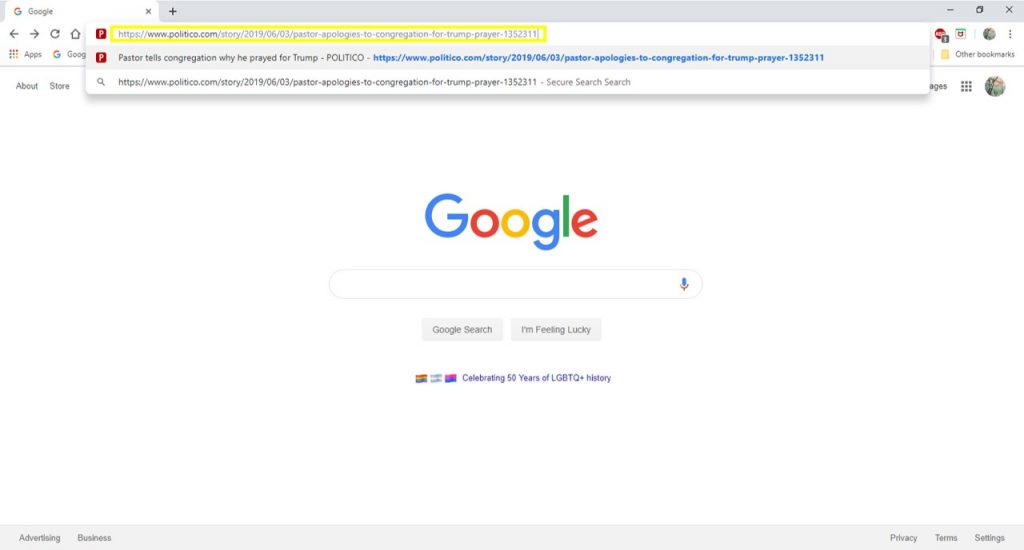 If there were any archives of the original article, as there almost certainly were, they’ve been scrubbed. 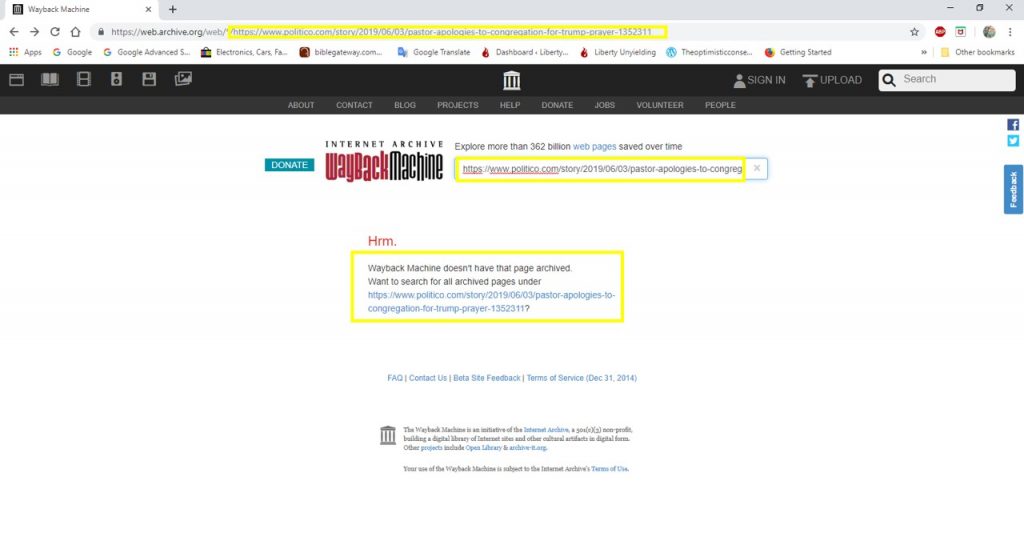 It is sad that members of the McLean Bible Church congregation may have been upset that their pastor prayed for the president.  That attitude is not Trump’s fault.  The sooner we all come to terms with that, the better.  The problem lies in us – and it’s not about whom we’re praying for, it’s about Whom we’re praying to. Is He a small God who can be besmirched by the character of those we choose to pray for? Or is He bigger than all our faults and problems?

Of importance for the point of this article, meanwhile, it’s increasingly dangerous to let our habits of thought be guided by cues laid out by the media.  I wrote about this a few years ago when I parsed another syndicated news service article: a report on some men in North Carolina who had been charged with manufacturing illegal explosives.

The article left an emphatic but utterly misleading impression that the men were being charged for “being preppers” and “having a lot of guns.”  Those things aren’t even illegal.  But the agenda of restricting or banning guns is served by implying that there’s some way in which they are.

Similarly, the agenda of defaming Trump is served by implying that a pastor had to apologize after praying for him.  The pointed reference to a fool despising wisdom and instruction also helps.  I don’t think Platt meant it as a dig at Trump – he was just doing the age-old pastor thing of invoking scripture to structure our thoughts about how and why we’re praying – but it’s hard to read the AP article any other way.

You could throw in the oblique implication, for good measure, that it might be politicizing the pulpit to pray for the president – even if the prayer is a wholly spiritual prayer for exactly the things you’d petition God for in the case of any person, regardless of title or position.

If the media that reported this event thought their reportage was defensible, or at least understood that this might be an opportunity for a healthy discussion, they wouldn’t go to so much trouble to alter it and hide the audit trail.

But they did choose that route.  That’s why they are so little trusted now.  One thing we can profitably pray for is that that will change.

First of all, then, I urge that supplications, prayers, intercessions, and thanksgivings be made for all people, 2 for kings and all who are in high positions, that we may lead a peaceful and quiet life, godly and dignified in every way. 3 This is good, and it is pleasing in the sight of God our Savior, 4 who desires all people to be saved and to come to the knowledge of the truth. 5 For there is one God, and there is one mediator between God and men, the man Christ Jesus, 6 who gave himself as a ransom for all, which is the testimony given at the proper time.

And consider Platt’s request to his congregation in the conclusion of his online letter: “In the end, would you pray with me for gospel seed that was sown today to bear fruit in the president’s heart?”  I can’t think of a single reason for Christians not to pray for that, no matter who the president is.  On that headline, the wording, the implication, and the URL never change.