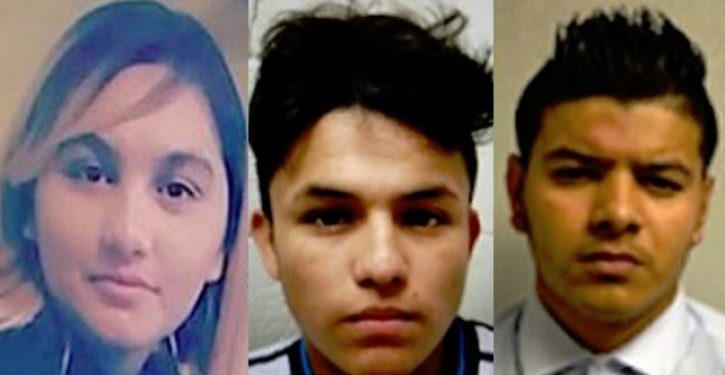 The victim, 14-year-old Ariana Funes-Diaz, appears left; the other two are her killers (Image: Left—provided; center and right—police photos)

Yesterday, LU reported that two teens from El Salvador, both in the country illegally and both members of MS-13, had been charged with murdering a 14-year-old girl with a machete and baseball bat. An inescapable fact of the case is that it might have been prevented: A year ago the same two teens were arrested for attempted murder, but authorities in Prince George’s County, Md. — a sanctuary county — opted to release them in defiance of an ICE detainer.

On Wednesday, the Prince George’s County jail director held a press conference in which she defended the decision to turn the teens loose, arguing that “A detainer is not a warrant.” In the video of her remarks, she further submits that her actions were “legal and proper based on guidance from the Maryland Attorney General.”

“A detainer is not a warrant.”

If we follow the jail director’s reasoning to its logical extreme, then the solution to preventing future outrages like this is to give ICE the legal authority to issue warrants, which would require the cooperation of people like to her.

Another Democrat who spoke out in the wake of this savage killing was House Speaker Nancy Pelosi, who referred last December to illegal alien as “patriotic.” An op-ed in The Washington Post that Pelosi co-authored with Rep. John Sarbanes (who is himself from Maryland) promised:

We will confront discrimination with the Equality Act , pass the Dream Act to protect the patriotic young undocumented immigrants who came here as children, and take the first step toward comprehensive immigration reform. [Emphasis added]

And now this. Pelosi did send out condolences this time, but not to the family of the murder victim, 14-year-old Ariana Funes-Diaz. Instead her sympathies went to the family of Carlos Gregorio Hernandez Vasquez, a child who died in the custody of Customs and Border Protection (CBP). The 16-year-old died of influenza, which Pelosi characterized as a “grim reminder of the human cost of the Administration’s extreme, failed policies on our southern border.”

It might be interesting to know whose failed policy the speaker would blame for the death of Ariana Funes-Diaz.

Condolences to the family of Carlos Gregorio Hernandez Vasquez, the fifth child to die in CBP custody since December and a grim reminder of the human cost of the Administration’s extreme, failed policies on our southern border.

Nunes asks Trump to query Theresa May on Brits’ handling of Steele dossier
Next Post
Joy Behar: Trump and all the Republicans ‘should be thrown into jail’