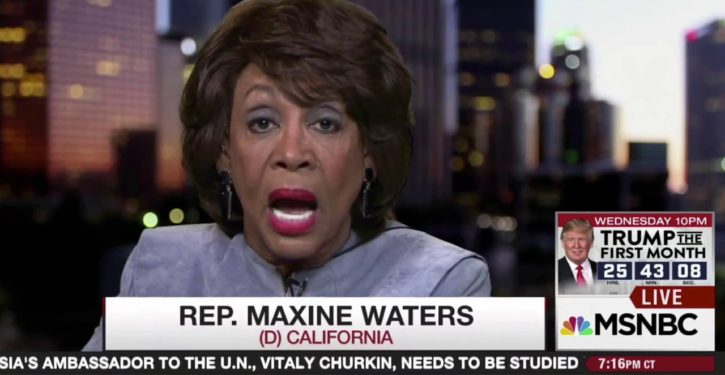 “I think some of [Trump’s plan] is very racist. It is not keeping with what this country is supposed to be all about,” the longtime Democratic lawmaker said Friday on CNN’s “New Day.”

When pressed for what exactly is “racist” about the president’s plan, Waters pointed to the White House’s desire for more highly skilled migrants and those who are proficient in the English language. Under the administration’s plan, these better-educated migrants would be permitted into the U.S. in greater numbers in exchange for fewer low-skilled immigrants.

“This business about ‘you must speak English’ or ‘we’re going to give you points for speaking English. We don’t want poor people, we only want those people who are earning substantial wages already.’ All of those things are not keeping in step with the way that we treat human beings,” Waters said.

“And even the fact that, you know, he used to talk about chain migration. When you were able to help others in the family come. He’s going to limit that. I think that some of those policies are racist,” she concluded.

Waters’s comments came a day after Trump unveiled his sweeping immigration plan to the public. The proposal, spearheaded by senior adviser Jared Kushner, includes a two-pronged approach that calls for enhanced border security and a shift to a more merit-based system that allows for more high-skilled migrants to enter the U.S.

Waters was not the only California Democrat to rail against the White House’s proposal. House Speaker Nancy Pelosi called the plan “dead on arrival” when speaking to the press Thursday.

“The White House has repackaged the worst of its past failed immigration plans: greenlighting the administration’s barbaric family detention policies, reviving the president’s ineffective and wasteful wall, completely abandoning our patriotic and determined Dreamers and gutting our asylum and refugee protections,” Pelosi said in a statement railing against the administration’s attempts to quell the border crisis.

House Majority Leader Steny Hoyer also accused the president of pushing “xenophobic and false stereotypes about immigrants from certain parts of the world.”

What most of the politicians appear to overlook is the fact that merit-based immigration is practiced by socialist democracies the Left in this nation most admires, including Canada and members of the European Union, all of which award points for mastery of the local language and “adequate education.” The U.S. itself had a points-based immigration system in the first half of the twentieth century.

It’s considered unlikely that Republicans and Democrats could reach a deal on immigration reform, but the White House has signaled a willingness to give Democrats Deferred Action for Childhood Arrivals in exchange for greater border security.

Ben Bowles contributed to the above report.