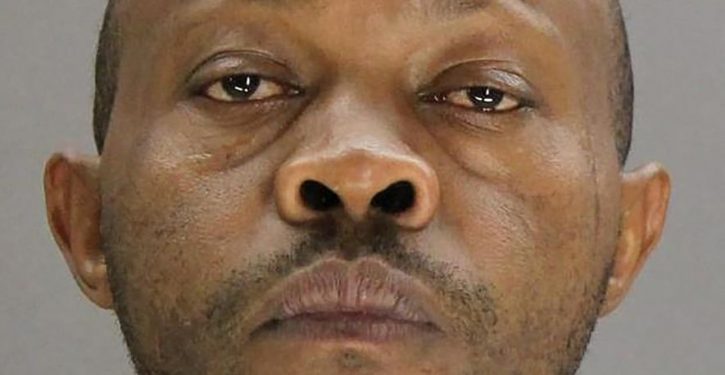 According to data recently published by the U.S. Federal Bureau of Prisons, 19.4% of inmates in U.S. prisons are criminal aliens. Considering the raw numbers — 34,776 inmates are people in the U.S. illegally — it stands to reason that eventually we will witness every permutation of violent crime possible. Last month, LU reported that a twice-deported illegal alien had returned, this time committing murder and rape.

And now the country has its first illegal serial killer. According to the Associated Press via The Washington Times, “46-year-old Billy Chemirmir was indicted Tuesday on six more counts of capital murder in the deaths of women ranging in age from 76 to 94.”

Chemirmir, a Kenyan citizen who was living in the U.S. illegally, also is charged in nearby Collin County with two counts of attempted capital murder for similar attacks there, according to county court records.

The killings were a means to end for Chemirmir, who, after murdering his victims, stole their jewelry and other valuables.

Chemirmir has been in custody since March 2018 in connection with the death of the 81-year-old Dallas woman, Lu Thi Harris.

A break in the case came when one of his victims survived. Chemirmir had forced his way into the apartment of a 91-year-old woman whom he attempted to smother with a pillow before stealing a box containing her jewelry. Paramedics were able to revive her, however, and she provided details to investigators that led to Chemirmir’s capture.

NBC News reports that authorities in the Dallas area are now looking into 750 cases of elderly people dying unattended to see if any may be linked to the suspect.

Dems unanimous as House passes bill forcing schools to let males compete in female sports
Next Post
Mayor Pete: Eradicating the memory of Thomas Jefferson is the ‘right thing to do’