The U.S. House of Representatives passed the deceptively-named “Equality Act” on Friday, largely along party lines. It’s labeled as a “gay rights” or “transgender rights” law. But the Equality Act is so extreme that even many legal commentators who long supported gay marriage have taken issue with it. As John McCormack notes, “UVA law professor Douglas Laycock, who has long supported gay marriage and enacting a federal gay-rights law, says it would ‘crush’ religious dissenters.”

These critics of the “Equality Act” are not anti-gay. As McCormack notes:

Laycock has also been a longtime supporter of enacting a federal gay-rights non-discrimination law, but he doesn’t support the Equality Act, a bill just approved by the House of Representatives that would add “sexual orientation” and “gender identity” to the 1964 Civil Rights Act, because it would “crush” conscientious objectors.

“It goes very far to stamp out religious exemptions,” Laycock tells National Review in an email. “It regulates religious non-profits. And then it says that [the Religious Freedom Restoration Act] does not apply to any claim under the Equality Act. This would be the first time Congress has limited the reach of RFRA. This is not a good-faith attempt to reconcile competing interests. It is an attempt by one side to grab all the disputed territory and to crush the other side.”

While the bill passed the House today and will be bottled up in the Senate, it has close to universal support among Democrats and would very likely become law if Democrats control the White House and both chambers of Congress and abolish the Senate filibuster.

Republicans currently control the U.S. Senate by a narrow margin. CBS News says that Trump would likely veto the Equality Act if it passed Congress.

The Equality Act doesn’t just add categories like “gender identity” to existing law, or obliterate religious-freedom safeguards. It also fundamentally transforms the meaning of “public accommodation” found in the 1964 Civil Rights Act, and “dramatically expands” its reach. It regulates even the tiniest businesses or non-profits that have no “physical facility or place,” if they provide any “service,” “program,” or “good” (the way many non-profits such as the Boy Scouts do). It also allows the federal government to sue religious schools that don’t receive a nickel in taxpayer money. (Federal education laws like Title IX currently only apply to schools that receive federal funds, or whose students receive federal student loans).

Tennis star Martina Navratilova, who came out as a lesbian 37 years ago, says that in its current form, the Equality Act would do “significant damage” to women’s sports. She says it would force sports leagues to allow biologically-male transgender athletes to dominate women’s sports. Transgender athletes dominate girls’ sports in some states where sports leagues echo the Equality Act by basing gender identity on self-identification rather than biology. For example, high-school girls’ track in Connecticut is dominated by two biologically male runners who identify as transgender girls. They won the first and second-place spots in the state open indoor track championships. The Equality Act would impose a similar approach nationwide, rather than leaving it to sports leagues, states, or schools to decide on their own, based on what works best for them and their players.

The Equality Act does not contain the ban on quotas that earlier gay-rights legislation, such as the Employment Non-Discrimination Act, contained. While religious freedom is not usually a license to discriminate, it is one of many valid reasons not to force institutions to have quotas or preferences based on sexual orientation or gender identity.

The Supreme Court has ruled that the First Amendment allows religious institutions to discriminate based on criteria of their choosing in selecting clergy or other “voices of the church.” But courts have rejected religious-freedom arguments for discriminating based on sexual orientation in jobs performed by secular employees.

Discrimination, however, is not the same thing as “underrepresentation” or a lack of “diversity.” Judges should not be allowed to order institutions to have quotas, preferences, or “hiring goals” based on sexual orientation, even if they once discriminated against people in same-sex marriages, or assigned bathrooms based on biological sex, rather than “gender identity.” To the extent that the Equality Act might open the door to such orders (quotas have in fact occasionally been imposed in lawsuits over racial discrimination, although such quotas are usually disfavored), that would be an additional reason to oppose it (classifications based on sexual-orientation, rather than race, are not subject to “strict scrutiny”).

The Equality Act also raises troubling free-speech issues. If the Equality Act passes, religious schools might be sued under it for a “hostile learning environment” over speech by their students and staff that reflects the teaching of many Christian denominations, but offends gay or transgender students. To avoid such lawsuits, schools might end up censoring religious speech.

As lawyer Jerome Woehrle notes, under secular schools’ “hostile learning environment” harassment codes, “students and campus newspapers have been charged with” sexual-orientation “harassment for expressing commonplace views” about “sexual subjects, such as criticizing” things like “homosexuality, gay marriage, or transgender rights.” Some such harassment codes have been struck down by courts, and some courts have suggested that the First Amendment limits liability for “harassing” speech that is political or religious speech and not aimed at the complainant in particular (such as criticism of homosexuality). But the Supreme Court has avoided dealing with the subject, and has provided little guidance on how to reconcile conflicts between free speech and “harassment” liability. So risk-averse private institutions might censor such speech by their students or employees to avoid the risk of a lawsuit under the Equality Act, even if such speech is protected by the First Amendment.

Mike Pompeo to John Kerry: ‘Time to get off the stage’
Next Post
Australia: Conservative (Liberal-National) coalition racks up surprise victory 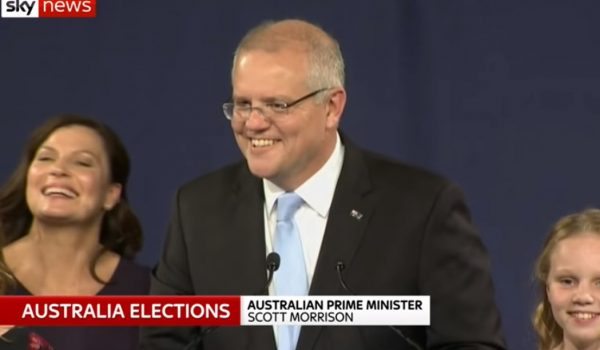