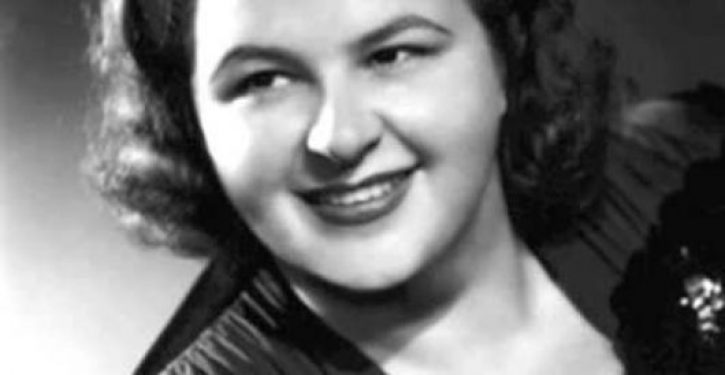 The other shoe has dropped. Three weeks after New York’s Daily News reported that the New York Yankees would no longer play Kate Smith’s recording of “God Bless America” during the seventh inning stretch because of a “racist” recording she had made eighty years earlier, the team’s fans are answering back with threats of a boycott.

The New York Post quotes Smith’s niece, Suzy Andron, as saying she was “’honored’ by the groundswell of support for the late singer among fans and media,” adding:

Most are solidly behind the positive notion that this is a misunderstanding by a few people who took two or three of her songs [out of 3,000 that she recorded] out of context and inflated a story that my Aunt Kathryn must have been a racist.

The back story, for those late to the game, is that Smith recorded a couple of “potentially” (the Daily News’s qualifier) racist ditties in the 1930s. One, “That’s Why Darkies Were Born,” included the lyrics, “Someone had to pick the cotton/Someone had to plant the corn.”

The paper noted that the song was also covered by Paul Robeson, the son of a runaway slave who went on to become a civil rights activist, but the die was cast. Smith’s stirring rendition of “God Bless America” must go.

And now Yankees fans are hopping mad. The Post quotes one “superfan” as saying he as “boycotting the Yankees until Kate Smith is back; otherwise I am kissing a half century of loyalty goodbye.”

There is no question in my mind that this latest act of “cleansing” is another manifestation of political correctness taken to an absurd extreme. Yet playing the devil’s advocate, I have to ask whether fans would even have noticed the absence of the Smith recording had its banishment not been so widely publicized? The last thing the country needs in this era of thin-skinnedness is for those on both sides of the divide to clutch their pearls over the most minor of derelictions.

By the way, if you’d like to hear Kate Smith’s rendering of “God Bless America,” you will find a link to a recording toward the end of J.E. Dyer’s 2017 reflection on Independence Day.

Ocasio-Cortez: We need a non-profit public option for banking services
Next Post
Drug prices set to be included in television ads