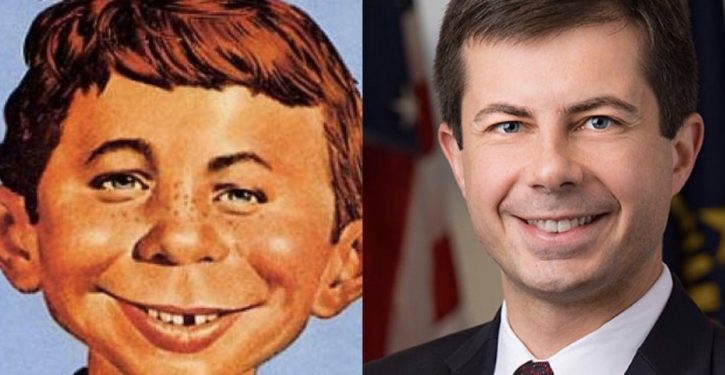 President Trump gave Politico a brief interview on Friday, and while he did say other things, the main thing anyone heard in the blah blah blah was “Pete Buttigieg” and “Alfred E. Neuman.”

The exchange with Trump on Buttigieg was brief, but epic.

“Alfred E. Neuman cannot become president of the United States,” the president told POLITICO in a 15-minute telephone interview, when asked what he thought of the South Bend, Ind., mayor.

A million tweets were launched.  Politico went on to add helpful context:

Neuman’s freckled, gap-toothed face and oversized ears have for decades graced the cover of the humor magazine Mad.

Politico may have felt that was necessary because Mayor Buttigieg, advised of this new designation, essayed the counter-troll on this wise.

Asked about Trump’s put-down by POLITICO in San Francisco on Friday, the 37-year-old Buttigieg professed ignorance about the comic book character, whose fame peaked more than 20 years ago, while making a veiled reference to the 72-year-old Trump’s seniority.

“I’ll be honest. I had to Google that,” he said. “I guess it’s just a generational thing. I didn’t get the reference. It’s kind of funny, I guess. But he’s also the president of the United States and I’m surprised he’s not spending more time trying to salvage this China deal.”

Granted, it’s hard to come up with a really witty troll on short notice.  He did all right.  We award Mayor Pete the silver medal in this case.  (We’re overruling the East German judge on that one.)

Some opinion commentators didn’t bear up quite as well.

Some media were hopelessly outclassed.

Trump tried to rattle Pete Buttigieg with a nickname. Buttigieg's response: “It's kind of funny, I guess. But he’s also the president of the United States and I’m surprised he’s not spending more time trying to salvage this China deal" https://t.co/NGfCBrLcir

A number of journalists weighed in for the purpose of pointedly weighing out.

Dear journalists: We’re really going to do this again? https://t.co/haNC41BA5k

There was a bit of peevishness.

2. Reporters to ask questions about anything but the dumb nicknames.

And, of course, the obligatory spurious fact-check.

All went according to the script for hours.  At random, Dr. Sebastian Gorka showed up to wonder a few things.

(So glad this is all giving @MADmagazine some exposure to a new crowd).

Wonder if @PeteButtigieg gets a percentage?) pic.twitter.com/vKL7NQ3cn4

Then the Bad and Dangerous to Know contingent finally arrived.

Who’s Pete Buttigieg? Must be a generational thing.

And we had our gold medalist at last.

Getting FISA authority illegally, as now looks probable, was unnecessary. Why was it done?
Next Post
Ocasio-Cortez: We need a non-profit public option for banking services