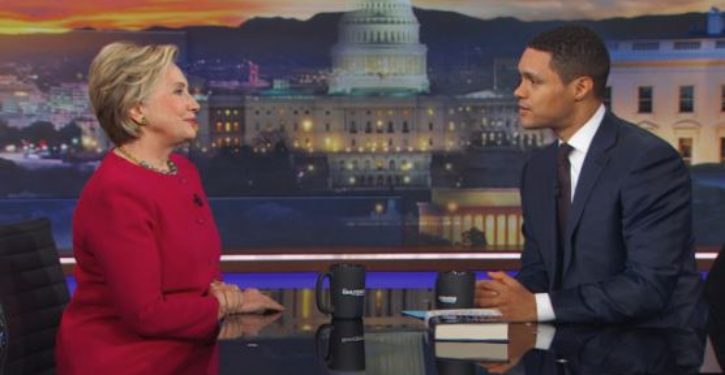 I don’t know if Hillary Clinton is planning a followup to her 2017 tell-all/confessional, “What Happened,” but maybe she should — you know, to catch the overflow of people and things responsible for her loss of the 2016 election. So far she has pinned the blame on Joe Biden, Bernie Sanders, Barack Obama, James Comey, Jill Stein, Vladimir Putin, Julian Assange, Anthony Weiner, sexism, the New York Times, lazy women, liberal activists, the Electoral College, and the rise of the socialist Democrats,

Now thanks to two researchers — Ethan Porter of George Washington University and Thomas J. Wood of Ohio State University — she may have a new culprit: Jon Stewart.

That’s not Stewart per se that is at fault but rather his departure from Comedy Central’s “The Daily Show.” As Kyle Smith explains per Porter and Wood in an hilarious article at the New York Post:

As Smith writes, the “scholars” appear to be confusing correlation with causation in their choice of the verb spur. He proceeds to ask, “how big of an influence could Stewart have been, considering the average audience for his top-10 most-watched episodes of ‘The Daily Show’ was less than 3 million people — not even 1% of the population and not all of them of voting age?”

In the abstract to their study (which is behind a pay wall) Porter and Wood posit that they also found evidence, albeit wear, “indicating that the end of The Colbert Report was associated with a decline in 2016 voter turnout.”

Their bottom line: “Our results make clear that late-night political comedy can have meaningful effects on presidential elections.”

If true, it is a sad commentary on our country, but either way their paper seems to be an even sadder commentary on what passes as science.