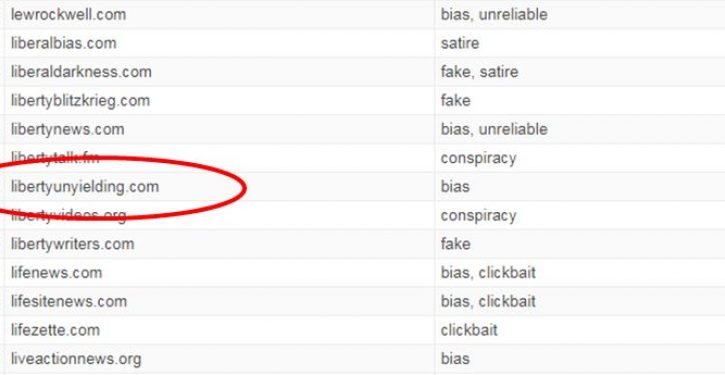 Remember Melissa (“Mish”) Zimdars? Of course you don’t. Her name hasn’t exactly been a household word in the two and a half years since the assistant professor of communication and media at Merrimack College (where?) compiled a list of “False, Misleading, Clickbait-y, and/or Satirical ‘News’ Sources.”of which Liberty Unyielding was one.

I mention her now only because her list is back in the news, this time as one of the “databases of unreliable news sites” curated by the vaunted Poynter Institute for Media Studies for its own index of 515 “unreliable news websites.” Once again, LU has “made the cut.”

As John Nolte of Breitbart (which is also on the list) notes:

Poynter … is openly calling for advertisers to stop sponsoring these sites, to pull their sponsorship, to put these sites out of business.

If that’s not a blacklist, tell me what is.

Here is how Poynter, which prides itself on being a “champion of freedom of expression,” justifies this act of blatant censorship in its preamble to the list:

Fake news is a business. Much of that business is ad-supported.

Advertisers don’t want to support publishers that might tar their brand with hate speech, falsehoods or some kinds of political messaging — but too often, they have little choice in the matter.

Most ad-tech dashboards make it hard for businesses to prevent their ads from appearing on (and funding) disreputable sites. Marketers can create blacklists, but many of those lists have been out-of-date or incomplete.

Aside from journalists, researchers and news consumers, we hope that the index will be useful for advertisers that want to stop funding misinformation.

As Nolte points out, this is straight-up McCarthyism.

What makes this all an unfunny joke is the regularity with which The New York Times, the Washington Post, the major networks, CNN, MSNBC, and a host of left-leaning blogs distort the news without so much as hand-slap from some arbiter of journalistic excellence.

WaPo editorial board blasts Barr after hearing: He ‘has lit his reputation on fire’
Next Post
Ilhan Omar gives talk to elementary school students: Parents not allowed to attend