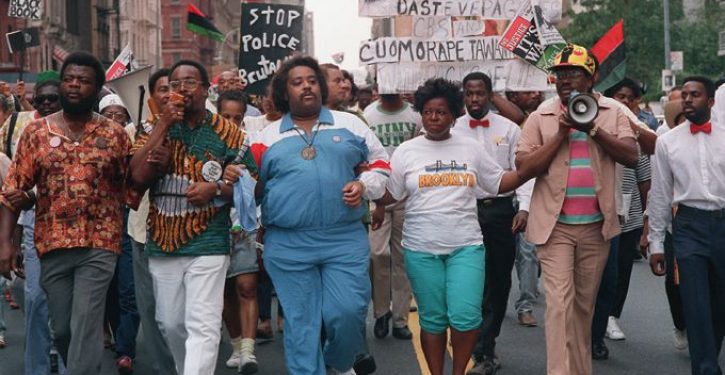 Imagine. Now in addition to being a fake man of the cloth, race huckster Al Sharpton will be a fake PhD.

Medgar Evers College, a publicly funded school situated in — of all places — Crown Heights, Brooklyn wants to give an honorary doctorate to Al Sharpton. That’s the same Al Sharpton who was one of the agitators of the 1991 anti-Jewish riot that began only 1.7 miles from the location of the school.

The college, in a resolution to go before a committee Monday, says it wants to recognize Sharpton’s “unwavering commitment to racial, educational and socioeconomic equity” at its June 5 commencement. [Emphasis added]

Medgar Evers College, in a resolution obtained by The Post attached to the proposed degree, does make note of 1991 as a key year in Sharpton’s history but makes no mention of the riots.

The resolution also omits Sharpton’s tax troubles and his 2017 decision to sell the rights to his life story to NAN, his own nonprofit, bringing him $531,000.

Bad enough that a publicly-ran university would honor Sharpton for the non-existent achievements highlighted above, but the fact that it the school in question is in Crown Heights makes the honorarium nothing less than an outrage.

It was on the streets of Crown Heights On the evening of Monday Aug. 19, 1991 that a station wagon driven by Yosef Lifsh hit another car and caromed onto the sidewalk. The station wagon was part of a three-car motorcade carrying the Lubavitcher Rebbe Menachem Schneerson. Schneerson was in a different car.

The station wagon struck two black children, 7-year-old cousins Gavin and Angela Cato, who were on the sidewalk. Lifsh immediately got out of his car and tried to help the children but, owing to the tension that already divided the community, which was a mix of orthodox Hassidic Jews and blacks, he was pushed back by the gathering crowd.

The injured children were rushed by separate city ambulances to Kings County Hospital where young Cato was pronounced dead.

Instantly, rumors began to circulate that Lifsh was intoxicated (he was not), that he did not have a valid driver’s license (he did), and that he went through a red light (he didn’t). Ignited by the falsehoods, resentment exploded into violence. Groups of young black men threw rocks, bottles, and debris at police, residents, and homes. But the violence would take a deadly toll before the night was over. A 29-year-old Australian Jewish scholar named Yankel Rosenbaum was attacked by a gang of black teens. He was stabbed four times and died at approximately 2:30am the next morning.

It was against this racially and emotionally charged backdrop that Al Sharpton made his entrance. He helped foment chaos into a full-blown riot that lasted three days and three nights. Sharpton stoked already raw passions by delivering a eulogy at Gavin Cato’s funeral.

The world will tell us he was killed by accident. Yes, it was a social accident. … It’s an accident to allow an apartheid ambulance service in the middle of Crown Heights. … Talk about how Oppenheimer in South Africa sends diamonds straight to Tel Aviv and deals with the diamond merchants right here in Crown Heights. The issue is not anti-Semitism; the issue is apartheid. … All we want to say is what Jesus said: If you offend one of these little ones, you got to pay for it. No compromise, no meetings, no kaffe klatsch, no skinnin’ and grinning.’ Pay for your deeds.

A banner was displayed at the funeral that read, “Hitler did not do the job.”

And now Sharpton is to be feted for his “unwavering commitment to racial, educational and socioeconomic equity.” Somewhere, Gavin Cato is laughing his ass off.