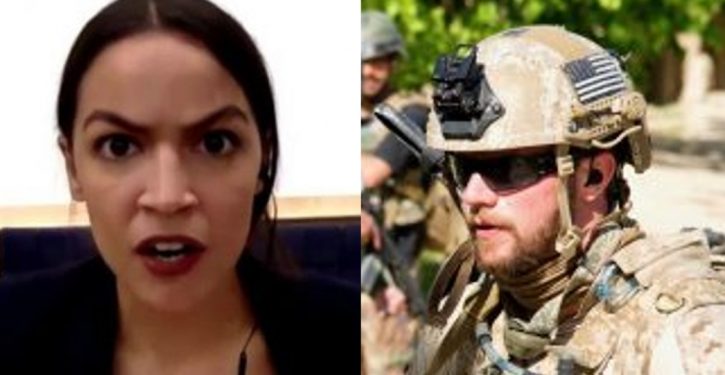 Rep. Dan Crenshaw (R-TX) seems to understand the effectiveness of quietly quoting the absurd, indefensible statements made by others, without getting into bloviation or hysteria himself.

As reported by LU on Wednesday, Rep. Ilhan Omar (D-MN), speaking at a CAIR dinner in California last month, described the 9/11 attacks in dismissive terms, saying “some people did something.”  In context, the quote is actually worse: Omar was minimizing the significance of the 9/11 attacks in order to exaggerate the backlash she claims against Muslims in America.  She even asserted that CAIR was founded to rescue Muslims’ civil rights after 9/11, a patent falsehood.  (CAIR was founded in 1994.)

Quite a few people have understandably been indignant about the whole thing.

Dan Crenshaw kept his cool, however, merely tweeting out the Twitter version of a “smh” (shaking my head).

First Member of Congress to ever describe terrorists who killed thousands of Americans on 9/11 as “some people who did something”.

Rep. Omar fired back, claiming that Crenshaw’s tweet was a form of “incitement.”

This is dangerous incitement, given the death threats I face. I hope leaders of both parties will join me in condemning it.

My love and commitment to our country and that of my colleagues should never be in question. We are ALL Americans! pic.twitter.com/foTZMpiZKv

She further claimed, illogically, that her “love and commitment to our country and that of my colleagues should never be in question.” That tends to depend on a person’s behavior and apparent priorities, things the American people reserve the right to judge for themselves.

But at least Omar wasn’t left to mount a counterattack by herself. Ms. Ocasio-Cortez waded in Thursday morning, taking aim at Crenshaw with her paintgun fully loaded.

You refuse to cosponsor the 9/11 Victim’s Compensation Fund, yet have the audacity to drum resentment towards Ilhan w/completely out-of-context quotes.

In 2018, right-wing extremists were behind almost ALL US domestic terrorist killings. Why don’t you go do something about that? https://t.co/rkb92IxkKX

Yes, Ocasio-Cortez deployed the unanswerably specious charge that Crenshaw isn’t co-sponsoring a bill that doesn’t need more sponsors, that Crenshaw will almost certainly vote for (unless House Democrats try to lard it up with unacceptable addenda), and that will undoubtedly become law and keep the victims’ compensation fund afloat.

Maybe she doesn’t know that he was on his first combat tour in Fallujah during the Iraqi “surge” under George W. Bush, when Ocasio-Cortez was 17.  The “surge’s” key objective was to annihilate the terrorist occupiers of Anbar Province, mostly affiliates of Al Qaeda.

Crenshaw fought terrorists in Afghanistan in follow-on tours with SEAL units.  In Helmand Province in 2012, he lost his right eye when he was hit by the blast from an IED. His campaign website tells the story:

On Dan’s third deployment in 2012, his life changed forever. After six months of combat operations, Dan was hit by an IED blast during a mission in Helmand province, Afghanistan. He was evacuated and awoke from his medically induced coma learning that his right eye had been destroyed in the blast and his left eye was still present, but badly damaged. Dan was completely blind and the doctors did not believe he would ever see again. Tara [his wife] stood by him every day and night, keeping faith and praying he would see again. After several difficult surgeries, he eventually regained sight in his left eye, a miracle according to the head surgeon. Dan refused to quit and went on to deploy twice more, first back to the Middle East in 2014 and then South Korea in 2016.

Crenshaw is characteristically humble, focusing on the benefits of faith, and for that matter, the faith of others. He does note some of the awards he left ten years of military service with:

[T]wo Bronze Stars (one with Valor), the Purple Heart, and the Navy Commendation Medal with Valor…

A SEAL on active duty between 2006 and 2016 typically spent most of his time fighting terrorists or preparing to fight terrorists.  Dan Crenshaw would seem to have done his part.