The federal budget deficit is staggeringly huge, and is expected to exceed $1 trillion this year. Congressional Democrats are trying to make it even bigger.

Last week, Democratic leaders in the House of Representatives pushed through a committee a budget deal that would boost spending caps by $350 billion. But even that massive increase in spending was not enough for some Democrats. This week, passage of this spending increase temporarily stalled in the House of Representatives. That’s because progressives think it doesn’t increase domestic spending enough. Because the GOP opposes it, the Democrats need progressive support to pass the deal in the House, on a party-line vote.

Spending may rise still more rapidly if Democrats retake the White House and Senate in 2020. Supporters of the budget increase indicated they wanted larger spending increases but realize they would have to settle for less due to the fact that the GOP currently controls the Senate and White House. “I would like to see a larger increase in non-defense spending, but I also realize that there’s a lot better chance of that happening winning the Senate and winning the White House,” Rep. Brendan Boyle, Pennsylvania Democrat, told The Washington Times. “So it is also the art of what’s possible at this moment.”

The budget increase backed by Democratic leaders does not include the cost of the Green New Deal backed by leading progressives such as Bernie Sanders, Beto O’Rourke, Kamala Harris, and Elizabeth Warren. Presumably, this is because the White House opposes the Green New Deal and would veto legislation needed to implement it, making it a non-starter until the Democrats retake the White House.

The Green New Deal has been variously estimated by think-tanks to cost up to $65,000 per household per year, or at least $50 trillion and possibly over $90 trillion (four times the size of the entire U.S. economy). If implemented, the Green New Deal blueprint would harm the stability of America’s power grid, eliminate vital nuclear power plants that emit no carbon dioxide or air pollution, and increase construction-related pollution.

The spending increase also does not include the cost of reparations, which conservatives oppose, and which likely could not pass the GOP-controlled Senate. Most leading progressives now support race-based reparations, which the New York Times says could “cost several trillion dollars.” Reparations policies harmed the economies of countries that pursued them, such as Zimbabwe.

How brilliant was it to make Maxine Waters chair of the House Financial Services Committee?
Next Post
Cartoon of the Day: Double trouble 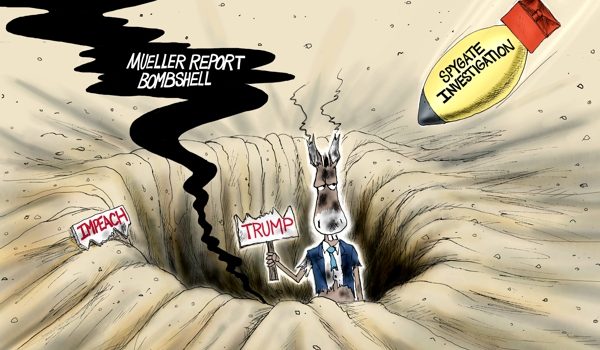