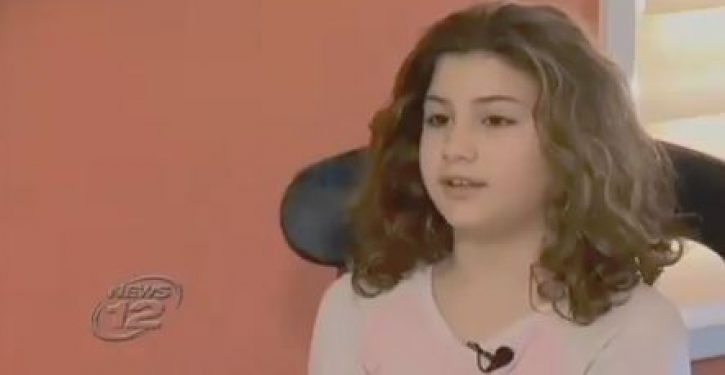 Liberal brainwashing been an ongoing problem in schools for more than a decade now. Back in 2014, elementary school students were given an assignment in which they were required to compare George W. Bush to Adolf Hitler and Barack Obama to Abraham Lincoln. When a new president is sworn in, homework changes to reflect it. Witness a vocabulary(!) assignment in 2018 that praised Obama and bashed Donald Trump.

Last week it happened again. According to The Epoch Times, an 11-year-old was forbidden to use President Trump for a class assignment that asked students to name their personal hero.

Bella Moscato, a sixth-grader at the Samoset Middle School in Ronkonkoma, [N.Y.] chose Trump as her choice for the hero project at school. But her teacher told her to pick another hero and said Trump “spreads negativity and says bad stuff about women” in front of another teacher and the class, News 12 Long Island reported.

Valerie Moscato, Bella’s mother, was outraged and told the news outlet that what the teacher did amounts to intimidation and censorship.

“This was really frustrating to me because, you know, my daughter has every right to pick a hero of her choice. It’s first amendment right, freedom of speech, freedom of expression. So it was really upsetting to me that she was trying to shut her down,” she said.

The ruling came after young Bella had submitted her paper, in which she wrote:

Donald Trump has helped millions of people by creating a great economy. He is fighting every day to protect the people from drugs crossing the border.

According to the sixth-grader, another student chose to write about Obama, but that presented no problem for the teacher.

One of the demons the Left claims to be dedicated to eradicating is bullying. Their commitment to fighting this specter runs so deep that they have blacklisted the Christmas classic “Rudolph, the Red-Nosed Reindeer” because it is the story of an individual who is mocked by his peers and ostracized. But when it comes to genuine bullying, including a teacher imposing limits on her students based on her own political views, liberals are silent.