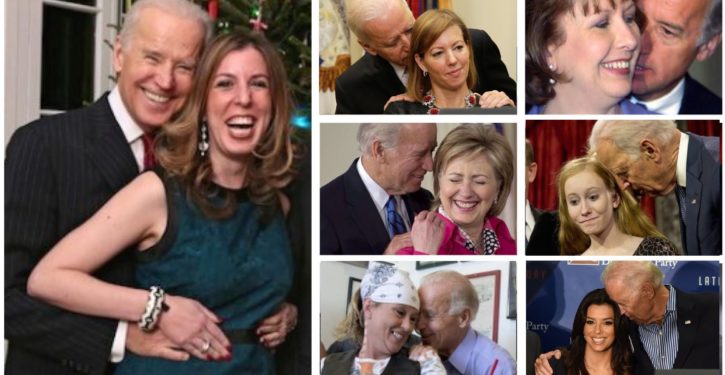 In politics, as in sports, timing is everything. And no one in politics has more impeccable timing than former Vice President Joe Biden. No sooner had the prospective 2020 presidential candidate — who is white and male — assailed the nation’s “white man’s culture” for its abusive behavior toward women than Nevada State Assemblywoman Lucy Flores accused Biden of “inappropriate” behavior toward her. It happened back when she was running for for lieutenant governor of the state.

I felt him get closer to me from behind. He leaned further in and inhaled my hair. I was mortified. I thought to myself, “I didn’t wash my hair today and the vice-president of the United States is smelling it. And also, what in the actual f***? Why is the vice-president of the United States smelling my hair?” He proceeded to plant a big slow kiss on the back of my head. My brain couldn’t process what was happening. I was embarrassed. I was shocked. I was confused. There is a Spanish saying, “tragame tierra,” it means, “earth, swallow me whole.” I couldn’t move and I couldn’t say anything. I wanted nothing more than to get Biden away from me.

So does Biden have an answer for these allegations? You bet he does. On Sunday, he released a statement in which he acknowledged that he had offered “countless handshakes, hugs, expressions of affection, support and comfort” during his years in public life, adding, “not once — never — did I believe I acted inappropriately.”

He concluded the statement with a somewhat bizarre concession:

If it is suggested I did so, I will listen respectfully. But it was never my intention. I may not recall these moments the same way, and I may be surprised at what I hear. But we have arrived at an important time when women feel they can and should relate their experiences, and men should pay attention. And I will.

He will “listen respectfully” if it is suggested that he do so? How about otherwise?

Biden has not yet decided whether to throw his hat in the ring, but if he does, it is clear he will have more ‘splaining to do. Several of the Democratic contenders for the nomination have already spoken, per the Post:

Both Sen. Amy Klobuchar (D-Minn.) and Sen. Bernie Sanders (I-Vt.), who are pursuing 2020 Democratic White House bids, said they had “no reason not to believe” Flores.

“I read the op-ed last night. I believe Lucy Flores. And Joe Biden needs to give an answer,” Warren told reporters in Iowa. Asked whether Biden should pass on running in 2020, she replied, “That’s for Joe Biden to decide.”

The Post, meantime, devoted a second article on Sunday to what it calls Biden’s “affectionate, physical style”. In it,  Terri Poore, policy director of the National Alliance to End Sexual Violence, is quoted as saying of Biden, “He’s absolutely been an amazing ally on the policy level and on campus sexual assault.” Jennifer Lawless, a University of Virginia professor focused on gender and politics, is also quoted saying, “If he demonstrates that he has learned, then okay, then I think he can stand on his record [on women’s issues].”

Funny, I don’t recall the Post hunting down and publishing similar quotes about Brett Kavanaugh when he was under the gun.

Collusion delusion is over
Next Post
Cartoon of the Day: Hope in change 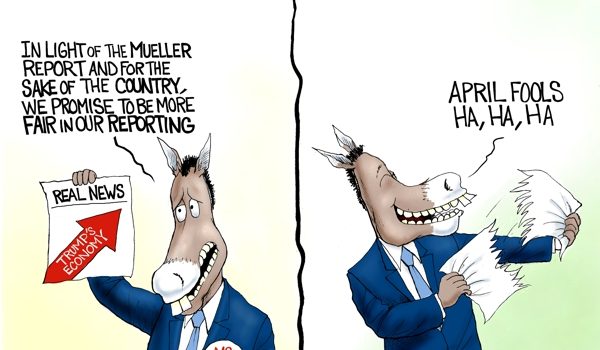