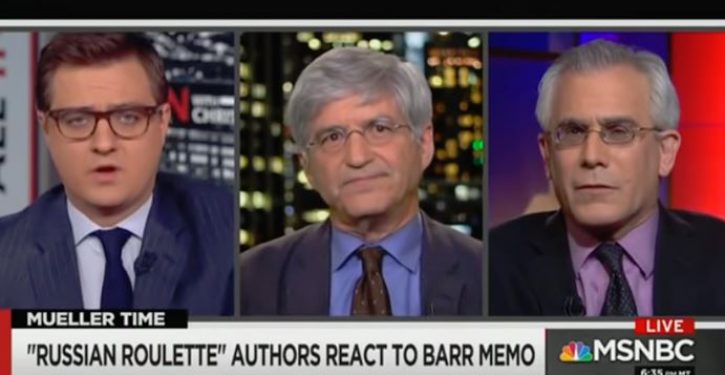 The two journalists most closely linked to the Steele dossier acknowledged Monday that the Democrat-funded document was debunked by the Mueller investigation, which found no evidence of collusion between the Trump campaign and Russian government.

“I think one of the reasons people were so surprised by the Mueller finding is that it undercuts almost everything that was in the dossier, which postulated a well-developed conspiracy between the Russians and the Trump campaign,” Michael Isikoff, a reporter for Yahoo! News, told MSNBC’s Chris Hayes. (RELATED: 7 Collusion Theories That Died With The Mueller Report)

“That’s what got people worked up initially, and we do have to acknowledge that that which was alleged has not panned out.”

Isikoff was joined by David Corn, a reporter at Mother Jones. Isikoff and Corn, who co-wrote the book “Russian Roulette,” are two of a small handful of reporters who met with dossier author Christopher Steele prior to the 2016 election.

They both wrote articles for their own outlets touting Steele’s allegations that Trump associates conspired with Russians to influence the election.

Steele, who was working for the Clinton campaign and DNC, claimed that Trump campaign adviser Carter Page was the Trump campaign’s main liaison to the Kremlin. He also alleged that Michael Cohen, the former Trump lawyer, visited Prague in August 2016 to meet with Kremlin officials to discuss paying off hackers.

Those allegations were dismantled on Sunday, when Attorney General William Barr released a summary of Mueller’s report of the Russia probe. Mueller, according to Barr, found no evidence that Trump, members of his campaign, or other Americans conspired with Russia. (RELATED: Mueller Found No Collusion)

Isikoff noted that MSNBC anchors and guests frequently endorsed allegations from the dossier in the two years since BuzzFeed News published the salacious report.

“You know, it was endorsed on multiple, multiple times on this network, people saying it’s more and more proving to be true, and it wasn’t,” said Isikoff.

“The idea that Michael Cohen went to Prague and there was an extended and coordinated back-and-forth happening as they were running the operation hand-in-glove that comes through in some of the dossier, like that just did not happen, we know pretty definitively at this point. Would you be comfortable saying that?” Hayes asked Corn.

“I think more or less,” said Corn, who then downplayed the dossier’s significance to the collusion conspiracy theory.

“I think there was never a need for there to be that direct, you know, collusion or coordination, as I think is the term Mueller prefers,” he continued, rattling off a list of other Trump contacts that didn’t involve conspiracy with Russia.

Corn’s pivot is somewhat ironic since he has bragged about the fact that only he and Isikoff reported information from the dossier before the election.

Corn reported on Oct. 31, 2016 that a former Western intelligence official later identified as Steele had collected information that the Russian government was blackmailing Donald Trump.