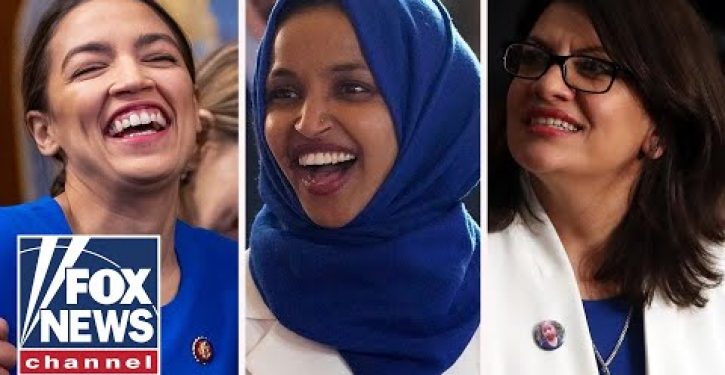 When writing about radical leftists from the Marxist tradition, it is almost obligatory at some point to deploy one of Karl Marx’s most famous quotes: “History repeats itself, first as tragedy, then as farce.”

The 20th century was the century of Marx-inspired tragedy.  And the tragedy was truly mind-boggling, on an almost spiritually incomprehensible scale.  We still don’t know how many people died in the terrible slaughters laid to Marx’s account.  One hundred million? One hundred fifty million?  Russia, China, Eastern Europe, Southeast Asia, Africa, Latin America.  For millions, still, their names and fates are known only to God.

Yet in the 21st century, as if we learned nothing from this colossal tragedy (or better, atrocity), the United States of America – the indispensable nation in prevailing over state-organized Marxism – now entertains a freshman class of radicals in the U.S. House of Representatives, who fling out day after day the same themes used by Marx’s disciples to foment revolution and shape power struggles in national politics.

The odd thing, however, is that Marx’s own words are being borne out in this development.  This second time around, we see clearly – starkly – the class vilification, the dehumanization, the feral pattern of relentless accusation, the incendiary verbal bomb-throwing, the thematic propaganda, the deceitful appeals, the insanely unrealistic “policy” proposals, the intramural power grabs, the utter lack of restraint and compunction.

All the characteristic patterns of Bolshevism: we see them for what they are. And they look like farce.

We’re finding out this week that in previous weeks, House members Ilhan Omar, Alexandria Ocasio-Cortez, and Rashida Tlaib were just getting warmed up.  Hopeful souls might have framed their earlier faux pas as learning opportunities.  But it’s clear now (as it was to the less optimistic from the get-go) that these women aren’t here to learn.  They’re here to disrupt and throw bombs.

Howard Portnoy reported Tuesday on Rep. Tlaib following an Instagram account that brands Jews as, among other things, rats, vampires, and Nazis.  Apparently she has unfollowed the account now, but that is meaningless.  That she was ever following it at all is an unerasable reality about who she is and what she thinks.  She didn’t change by clicking Unfollow.  This is what is in the halls of Congress now.

Ilhan Omar enlivened our politics in recent weeks with a series of increasingly egregious anti-Semitic outbursts.  This week, she was caught on video proclaiming Donald Trump to be subhuman.

Omar: “Absolutely not. … One is human the other is not”

Omar's dehumanizing remarks come after she was slammed last week for anti-Semitism pic.twitter.com/zFvi4KoicY

During WWII the Nazis forced victims in mass shootings to disrobe, because officers complained that Jews looked more “human” when they were dressed and it was upsetting the enlisted machine gunners. The first and favorite tactic of #AntiSemites like #IlhanOmar is to dehumanize… https://t.co/XhNGZWDcin

Our earlier article noted that Nancy Pelosi also sent a disrespectful volley Trump’s way in her announcement that she wasn’t looking at an impeachment process for him.  “He’s just not worth it,” she said.

Besides being casually dehumanizing in its own way, this seems like an awfully petty reason to decide for or against impeachment, which should be first and foremost about what’s good for America.  But leave that aside.  Leave Pelosi’s own attitude aside.

Of greater significance is the weakness exposed in Pelosi’s position by her inability to rein in the freshman Bolsheviks.  No one thought of her before as a North Star to guide by, of course.  But as of this week she looks like a superannuated relic in full retreat.  She can’t shut down the bomb-throwers; she conceded everything to them in the political defeat represented by the “all hatreds” resolution, which now gives Omar (and potentially others) a protected perch to snipe from; and she can’t marshal a theme and momentum of her own, one with the drama and revolutionary spirit to match what the Bolsheviks are doing.

Been there, done that.  Historically, the superannuated, old-politics relic loses this fight.

Meanwhile, Alexandra Ocasio-Cortez grabbed attention Tuesday in a hearing apparently held to accuse bankers of being complicit in bad things that might happen in the industries that finance operations with them.

LU carried an article on Monday previewing the intention of House Democrats to attack the financing of the private prison industry, as a way to make it harder to hold migrants in detention in the U.S.  Clearly, AOC’s line of questioning was related to that gambit.

Sloan: "I don't know how to answer that question because we weren't." pic.twitter.com/0ecaOAvvu8

The difference with the young-Bolshevik approach is that AOC has, in effect, stuck it on a garish propaganda poster and rammed it in the public’s face by leveling absurd accusations in a House hearing.  She paints the bankers as evil and complicit in the caging of children and in hypothetical oil pipeline disasters:

Socialist Rep. Alexandria Ocasio-Cortez (D-NY) asks Wells Fargo CEO Timothy Sloan: "Hypothetically, if there was a leak from the Dakota Access pipeline, why shouldn't Wells Fargo pay for the clean up of it?"

Sloan: "Because we don't operate the pipeline, we provide financing" pic.twitter.com/c6cShbStuk

The attempt at rapid-fire, reductionist vilification by association is classic Bolshevism.  It’s correct to point out that Americans on average still have too much of a rule-of-law mindset to find this anything but ridiculous.  (Timothy Sloan, as Ryan Saavedra argues, shut her down with answers of such sensible simplicity, it’s hard to keep from laughing.)

But the more important point about the young Bolsheviks is that there is no meeting point between their attitude and actions, and the mindset of average Americans.  There’s no common ground, no basis or even purpose for dialogue.  AOC has simply gone around the bend here.

And that, ultimately, is what makes this farce.  It’s so obvious what the radicalism is, and how egregious it is, it’s like watching a really bad movie and wanting to throw popcorn at the screen.

We shouldn’t be complacent about this, as long as there are people apparently under these mental influences roaming the halls of Congress.  But we do have reasons for true optimism, given that it is so very clear what we are seeing.

The Marxist themes of the young Bolsheviks are not deceiving us.  To the extent people in positions of responsibility are deceived, they are deceived by their own faulty preconceptions, marinated too long in our Old Consensus politics: the grand bargain in which Republicans for decades bought off Democratic shakedown maneuvers by mortgaging the taxpayers’ futures.  That Old Consensus has been imploding on itself for the last two decades, and is a problem in its own right.  But what it is not, at least not anymore, is a Trojan horse for ushering in radicalism.

The Old Consensus is equally not our lighted exit from the current mess.  Its day is done.  But that’s a good thing in the present hour, because it means Bolshevism has nothing to hide behind that anyone outside Washington wants to cling to.

Donald Trump was elected precisely because of that truth.  The Old Consensus isn’t compelling and doesn’t have enough support now to serve as the host for a Bolshevik parasite. The whole apparatus, host and parasite, just looks diseased.

Meanwhile, America in 2019 is not Russia in 1917.  Americans are not fighting a world war barefoot in the snow, mounting a desperate defense on our own soil.  We also have what Russia did not: a great middle class – the greatest wonder of human history – experiencing a resurgence of prosperity, and far too well armed to be taken down by cells of radicals on the model of Lenin and Trotsky.

And we have elected a president who, with all his many faults, has this sure virtue: he will not give in to Bolsheviks.  Nor will our national security apparatus fall to them.  Pelosi may be the Kerensky in the current situation, but there is no Czar Nicholas II.  The military will not desert the president, nor will the Secret Service.

Instead of tragedy, we get as farce the Bolshevik surge before us, culminating from the “long march” of Marxist themes and theory through our Americans institutions.  Perhaps not everyone sees the reason for this, but in temporal, human terms, it’s simple.

Marx was wrong, and America proves him so.  Marxism wasn’t itself broken with the end of the Cold War.  But it is being broken now, before our eyes: broken through simple exposure for the tired, pathetic lie it is.  It desperately needs some new material, but it is incapable of generating any – because it doesn’t describe or predict human reality, and it never did.

Marxism, as an -ism, didn’t get anything right.  It left out entrepreneurship – the magic, unifying bridge between labor and capital, the engine of America’s unprecedentedly equitable prosperity – and it left out the human spirit and its uncanny response to freedom, and it left out the transcendent, uncontrollable factor of God.

In the House of Representatives in 2019, watching a Generation ‘68 descendant of Marxist Bolshevism try to announce its presence with authority is like watching toddlers act out little dramas by repeating the shocking things they’ve heard adults say, with or without understanding.  The danger will lie in not taking it seriously enough.

We must give credit to all those who have carried the fire of pragmatic liberty and common sense over the last 80 to 100 years, on both the left and the right.  But what we are witnessing in 2019 is Marxism, the great intellectual lie of our era, crashing and being shattered on the shoals of 63 million MAGA hats.

Mao Zedong, another Marxist of ill repute, famously said that “political power grows from the barrel of a gun.”  Who are we to say he was wrong?  The question is who has the “gun.”  The freshman radicals in Congress speak with casually incendiary effect as if they do.

But outside the Beltway, everyone else can see that they’re “Winchester.”  Don’t doubt the power of this.  Marx is dead.  Thank God for this display of barrel-of-a-gun Bolshevism, parading the walking dead before us.  Now we can shake off the chains of fear and resentment, clapped on us by Marx’s offspring — up to and including post-modern identity politics — and begin to get on with the business of freedom, and hope, and a future. 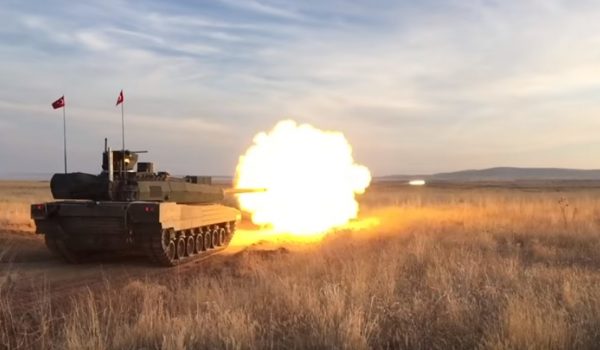