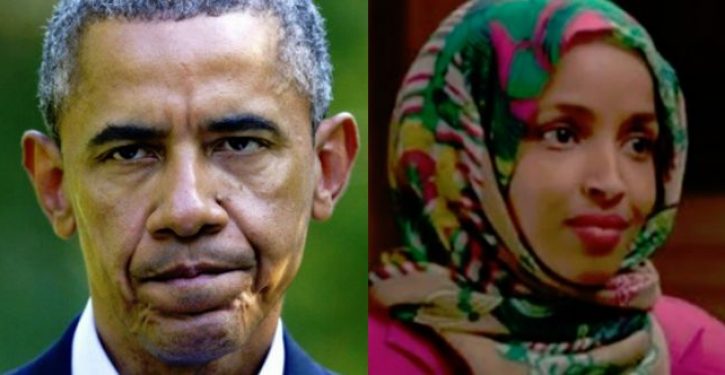 Even a stopped clock is right twice a day. Rep. Ilhan Omar, the unrepentant anti-Semite who has dominated the news cycle for several days, took a break from Jew-bashing to sit for an interview with Politico Magazine. In it, she demonstrates like her buddy, Alexandria Ocasio-Cortez, before her that nothing inside the Beltway is sacred. No one in D.C., past or present, is immune from the criticism of these freshman members of Congress. Not even the man perhaps most revered by Democrats: Barack Obama.

There is one paragraph 69-word paragraph out of an essay of close to 6,000 words devoted to the former president, but it’s sure to raise hackles:

As she saw it, the party ostensibly committed to progressive values had become complicit in perpetuating the status quo. Omar says the “hope and change” offered by Barack Obama was a mirage. Recalling the “caging of kids” at the U.S.-Mexico border and the “droning of countries around the world” on Obama’s watch, she argues that the Democratic president operated within the same fundamentally broken framework as his Republican successor.

Ouch. Late in the piece, she takes another more indirect dig at Obama:

We can’t be only upset with Trump. … His policies are bad, but many of the people who came before him also had really bad policies. They just were more polished than he was.

This dissing of Obama comes just days after a panel of his former water carriers at CNN affirmed once again that there were no scandals in his administration.