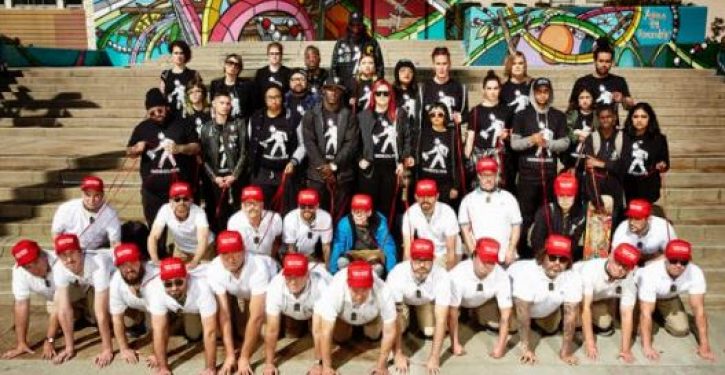 Sunday was a busy day for the Left in America. Socialist Sen. Bernie Sanders launched a kickoff rally for his 2020 presidential campaign at his alma mater, Brooklyn College, where he told a cold but enthusiastic crowd:

Donald Trump wants to divide us up based on the color of our skin, based on where we were born, based on our gender, our religion and our sexual orientation.

Bernie Sanders: "Donald Trump wants to divide us up based on the color of our skin, based on where we were born, based on our gender, our religion and our sexual orientation." pic.twitter.com/xITkfGBnkJ

Funny: One might easily mistake those for the goals of Sanders and his fellow Democrats, who drone on endlessly about how diversity is our strength.

Across the country, in Los Angeles, an even more pointed display of the Left’s contempt for the division and hatred that Donald Trump is blamed for sowing found expression in a piece of  “performance art.” The “work” consisted of placing white men in MAGA hats and leashes and “walking” them on all fours up and down Hollywood Boulevard. The project culminated at Trump’s star on the Hollywood Walk of Fame, where the dog actors growled and yapped like angry curs — which frankly was not that much of a stretch for them. Watch:

And they say the ones who voted for Trump are crazy. pic.twitter.com/MRWjZKwPwh

According to Gateway Pundit, the press release explained that the “project … speaks to race relations in America, specifically the patience exhibited by those most affected by racism and bigotry and their willingness, despite having the greatest right to anger, to walk their attackers down a path to empathy.”

So let’s get this straight. Those affected by racism and bigotry have a “right to anger” … unless they are white and/or male. And snapping and growling at people you don’t like is an expression of empathy.