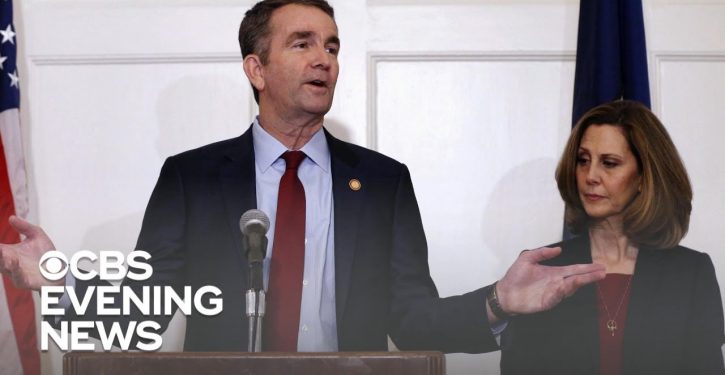 Last week, LU reported that embattled Virginia Gov. Ralph Northam seemed to have run out the clock on the scandal that was threatening to end his career. Nearly a full month after the publication of a split photo of a young man in blackface and another in a Klan get-up, one or both alleged to be Northam, a Quinnipiac University poll found that 48% of the state’s voters said the governor should remain in office, while only 42% percent said he should resign.

Even more revealing was the finding that 56% of black voters said Northam should stay, while 31% thought he should step down. The takeaway from these numbers was that the racial pandering he had done, which included a pledge to push through new funding for Virginia’s five historically black colleges and universities, had paid off.

But now a new report has surfaced that threatens to undo all of Northam’s goodwill efforts and put him back on the hot seat. According to The Washington Post, Northam’s wife, Pam, handed raw cotton to black students on a tour of the governor’s mansion and asked them to imagine having to forcibly pick the crop as slaves were. As though the report is not damning enough, the incident occurred since the blackface photo was leaked.

The Post quotes a Feb. 25 letter to lawmakers and the office of the governor from Leah Dozier Walker, who oversees the Office of Equity and Community Engagement at the state Education Department. In it she writes:

The Governor and Mrs. Northam have asked the residents of the Commonwealth to forgive them for their racially insensitive past actions. But the actions of Mrs. Northam, just last week, do not lead me to believe that this Governor’s office has taken seriously the harm and hurt they have caused African Americans in Virginia or that they are deserving of our forgiveness.

Mrs. Northam is quoted as saying in an email that she regrets having upset anyone and will now reconsider her plan to have students from a Jewish school in Virginia climb into the ovens in the mansion’s kitchen. OK, I made that last part up but — seriously — how far-fetched is it in light of all that’s happened?

Back when Blackfacegate was making daily headlines, Northam allowed as how he believed that the scandal would make him a better governor. One wonders how he believes this latest incident will play out.

Michael Cohen may have just helped Donald Trump
Next Post
Is Joe Biden hesitant to run out of fear his son’s spotty past would sink his campaign?