Will rent control — which harms the economy and reduces the supply of housing — come to liberal areas of Virginia? It could, if Democrats take control of the Virginia legislature in 2019. A Democratic legislature might vote to water down Virginia’s strict “Dillon Rule,” which prevents cities and counties from regulating in areas not delegated to them by the state legislature. In many states, local governments can adopt rent control. But local governments in Virginia cannot do so, for the time being, because Virginia has a strict “Dillon Rule.” Thanks partly to judicially-ordered redistricting, Democrats are expected to take control of both chambers of the Virginia legislature this fall.

Support for rent control is growing among progressives: With the backing of Gov. Kate Brown (D), Oregon’s liberal government is poised to adopt America’s first statewide rent control regime, which the Wall Street Journal says will harm the state’s economy and housing market.

Support for rent control is also growing in Virginia. Writing in the Arlington Sun-Gazette on January 3, a progressive former Democratic legislative intern advocated for short-term rent control as a response to Amazon moving into Arlington, Va., and potentially driving up rents. In response, a moderate Democrat pointed out that rent control is quite destructive. (Unfortunately, this Democrat is more moderate than the Democrats who run Arlington, and he supported a moderate independent on the County Board who was recently defeated by a liberal Democrat in the 2018 election.).

As that moderate Democrat noted, in sound advice that may fall on deaf ears in staunchly liberal Arlington County:

The economist Assar Lindbeck said that “next to bombing, rent control seems in many cases to be the most efficient technique so far known for destroying cities.” The stupider forms of rent control give landlords an incentive to destroy their buildings, and less heavy-handed laws still damage the ability of landlords to maintain their buildings while lessening the incentive to build new units.

Rent control, historically, generally has been enacted with the claim that it is a temporary crisis response, but after it’s in place, it lasts for years or decades.

Rent control is not currently permitted by the state government. Is this likely to change? Hard to know, as there is a lot of turnover in the House of Delegates recently, but the national experience with rent control has been so disastrous, and local landlord interests would fight so hard against it, I doubt it would be successful.

I also published a letter on January 23 explaining how rent control harms the economy and the availability of rental housing. As I noted:

After progressives take control of Virginia’s legislature this fall, due to redistricting and demographic change, they are expected to enact regulations that will wipe out countless jobs in Southside Virginia, which is very vulnerable to increased economic burdens due to its depressed economy. Regulations that may make sense in wealthy progressive regions don’t make sense in poorer, conservative regions where businesses operate on very thin profit margins. I discussed the economic implications for poorer regions of Virginia of such legislation in a commentary earlier this year. 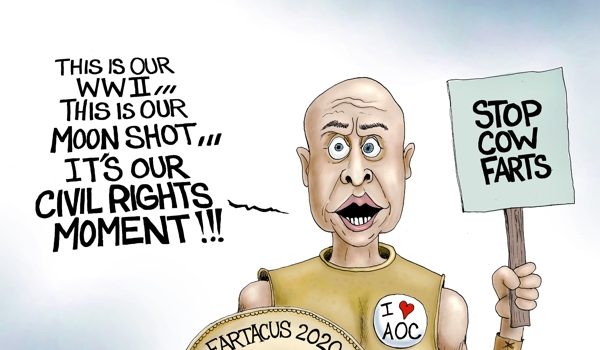 Cartoon of the Day: Fartacus moment
Next Post
AOC explains why illegals have a right to be here. Does she believe her own gibberish?