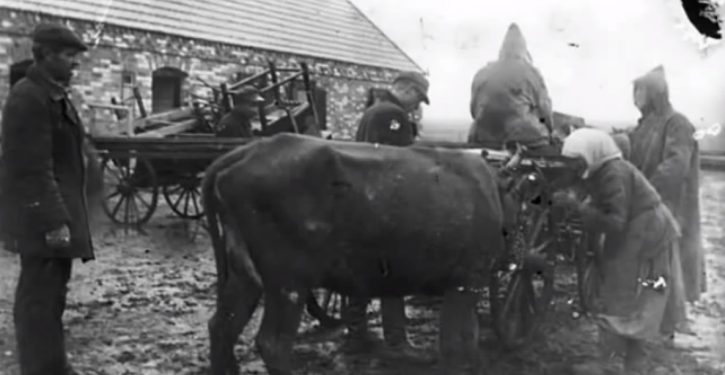 For the greater good: Kulaks, with their cow, being removed from their home in Ukraine under Stalin's rule. YouTube video

Like Kimberly Strassel of the Wall Street Journal, I laughed myself silly reading the rollout statement of the “Green New Deal” at Alexandria Ocasio-Cortez’s website.

Like my colleagues here at Liberty Unyielding, I recognized its many absurdities – incalculable cost, brain-scrambling economic disruption, fatuous inanities – and quickly detected their sheer irrationality.

In the hours since the rollout, I’ve followed the walk-back and damage control with at least mild interest.  Yes, the rollout statement was removed from the website shortly after it was posted. And there’s a whole thing with Tucker Carlson, an AOC aide, and Twitter duking it out over what the “official” version really says, and whose fault it was that some rogue version or versions said something else, and someone named Chakrabarti did too write the version that got posted, and AOC is tired of the whole thing although she retweeted some suspect-sounding comments from other people, and she wants everyone now to just go read the text of the actual House resolution at the Congress.gov website.

I invite you to dive as deep as you like and try to figure it out yourselves.

Here's one of her advisors lying to Tucker Carlson about it. AOC then retweeted this clip. The guy lied to Tucker, and AOC is spreading that lie. The "unwilling to work" line was NOT doctored. She deleted it from the website after being mocked. I had nothing to do with it. pic.twitter.com/terlbUVePO

If by "leaked" you mean "officially published on our website", then sure. https://t.co/4H7Z41QRUI

The FAQs that were posted to the AOC House Member website are now being called "fakes" and "never happened". pic.twitter.com/HihU3edEEL

Look what I found: @NPR has the original FAQs on the #GreenNewDeal from @AOC including the "unwilling to work" provision and thing about… cows. The document IDs the author of the FAQs: "Saikat Chakrabarti" (@saikatc), @AOC's Chief of Staff.https://t.co/JgMakTefLQ pic.twitter.com/YuY4oWYilo

The reason any of this matters is that a lot of Democrats who ought to know better came out endorsing the Green New Deal after the rollout.  Several of them are declared candidates for president in 2020.

But rather than belabor that aspect of it, I’d like to send one ping – one ping only – on the matter.  I’ll set it up with a tweet thread from Andrew Bostom.

Bostom makes excellent points here, and it is not to dispute or minimize them that I send my ping.  Let me add another, shorter version of the case Bostom makes, which is basically that socialism creeps in on little false-crisis/false-promise feet, sounding all smart-solution-y, and before you know it, jackboots.

The Democrats’ “Green New Deal” brings to mind an insight from Churchill: Socialism may begin with the best of intentions, but it always ends with the Gestapo.

But that’s the thing.  The Green New Deal doesn’t sound smart-solution-y, or like good intentions.  It doesn’t sound like something that overpromises things that would be lovely.  That’s not what it sounds like at all.  (Here comes the ping.)

We’re not even going to bother with the “men urinating in plastic jugs” and the “sitting in massage chairs,” which seemed pretty obviously to be someone’s idea of a joke, and have been huffily disavowed since the first sighting of Rogue One.

No, the appalling images are things like rebuilding every building in America, ending air travel as we know it in favor of high-speed rail, and getting rid of the cows because they fart (or, technically speaking, belch).

Now, I hate the smell of dairy farms as much as the next person, when I’m downwind of one on a summer day.  But I can’t entertain with equanimity the mental image of what it would take to get rid of the farting cows between now and 2030.  A lot of bullets and bonfires?  What are we talking about here?

It seems very likely that it would make me cry.  I know it would make me cry to see every building in the United States torn down and rebuilt by 2030.  It would be especially traumatic to have this project include the one I live in.  And then there are the relatives and friends who would be facing the same heart-torching prospect, and all the sorrow and disruption we’d all be in, forced to spend a year each, or two, or however long it took, being scrambled out of hearth and home by some ideologue’s building plan.

What would people get back for their trouble?  Someone else’s utilitarian idea of the right form of dwelling for each of us?

Oh, there’d have to be jackboots.  None of us would sign up for any of that voluntarily.  And that’s before we even get started on things like historical preservation and appreciation for old architectural styles, craftsmanship, and simple history.  So many of our structures are records of the past, and precious to our sense of who we are.

Likewise, the GND would wipe out the trucking industry.  Huge sectors of the economy would be obliterated – there are an awful lot of categories of work that depend on individually operated vehicles – along, of course, with as much of the fossil fuel industry as “feasible.”  By 2030.  Jackboots.

The economic disruptions inherent in the Green New Deal are so colossal, we won’t have to worry about incarcerating the naysayers in reeducation camps.

The green new deal is a good start. But what do you do with the Americans who still succumb to false consciousness? We need some kind of camp to re-educate them.

We’ll all die in the famine before that.

That’s the crystalline beauty of the Green New Deal.  It’s cataclysmically disruptive in its envisioned scope, and can’t be implemented without killing off most of us, one way or another.

And now that it’s out there, there’s no taking it back.  There’s no lying about what the vision really is.  A whole segment of our political class is signing onto it, making it clear we can’t trust them with anything because this is the truth about what they have in mind.

The House resolution is short on specifics, implicitly demanding that we trust someone to tell us what we have to do to navigate to each of its goals.  And that someone wants to kill your job, take your vehicle away from you, tear your home down and put you in something else, and all the while distinguish between you and “vulnerable communities” to ensure the pain is distributed according to a matrix of ideological preference.  If you’re reading this, you’re probably in the “max pain” focus group.

What a blessing for America, to be afforded this clarity at a crucial moment.  The chroniclers of socialism are right, if we look in the rearview mirror.  People have been suckered down the road to socialism in the past by false dilemmas, rosy visions, false promises, stealth inertia.  But for America in 2019, there’s no rosy vision or false promise here to deceive us.  There’s only a ghastly vision of coercion and death, starting with all those innocent cows. 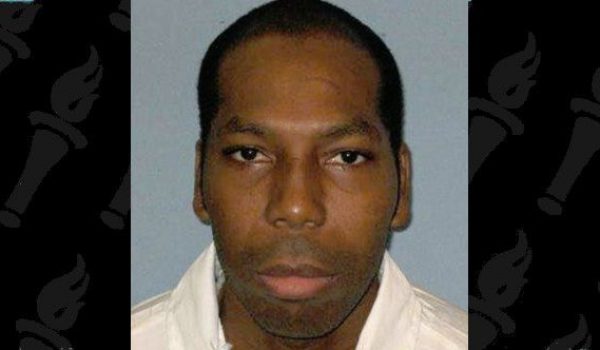