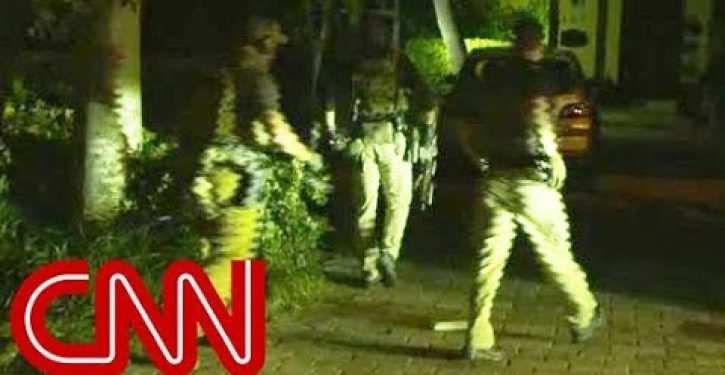 In late January I penned a post asking whether the FBI tipped off CNN about the plan to arrest Roger Stone so the network could film it. Putting aside the question of whether it was necessary for FBI agents to show up in full combat regalia with rifles drawn, the question about the tip-off remains trenchant for two reasons. First, why did the agency go to such lengths to embarrass Stone and how advised them to do so? Was it the Mueller team? Second — and I grant that this is a judgment call — why CNN, which especially of late has such a dreadful track record when it comes to fair and honest reporting?

Whatever the answers to those questions might be, new evidence confirms that the network had advance notice of the plan to “take Stone down.”

The evidence is video recorded by security cameras mounted in Stone’s Florida home. According to the time stamp on the unedited video, a CNN camera crew arrived at the house some 40 minutes before the raid took place. As Stone himself writes on Instagram:

Odd – this still from security video shows CNN arrived 40 minutes before the raid on my home and set up their camera 10 minutes before the FBI arrived. Their claim that they staked out my home every Thursday is disapproved [sic] by previous security camera recordings. If I was considered dangerous enough to require a take down by 29 FBI agents brandishing assault weapons why wasn’t CNN told to leave when the FBI closed the street?

Collin Rugg of the blog “I Love My Freedom” adds:

But it gets even worse. According to the same video surveillance video, it appears that authorities were giving directions to the CNN reporters who were at the scene.

With all that has been revealed over the last year about partisanship at the FBI, none of this exactly inspires confidence about the nation’s chief law enforcement agency.