Literally. It’s hard to say whether the damage TDS does is to the eyes or the brain, but there is no question that liberals inflicted with this malady exhibit symptoms.

We saw this last May, when the Left had a conniption fit over photos of migrant children in what appeared to be cages. Democrats were horrified by Donald Trump’s callousness. What kind of a person, they asked, would place a child — even one in the country illegally — in a cage?

The answer, it turned out, was a person like Barack Obama. The photographs in question were taken from the website of The Arizona Republic, where they were posted in 2014.

BOMBSHELL REPORT. The "beautiful military equipment" Trump sold Saudi Arabia and UAE is now in the hands of Al Qaeda aligned militias. One group drives U.S. made armored vehicles now. This is what happens when you flood a war zone with more weapons. https://t.co/2S0xE51Mr9

Murphy includes a link to an article at CNN that confirms in its subhead that “The US shipped weapons and secrets to the Saudis and Emiratis. Now, some are in the hands of fighters linked to al Qaeda and Iran.” But if Murphy had read past the headline, he would have come across this passage:

CNN obtained an image showing the serial numbers of a second American MRAP in the hands of another senior Houthi official last year in Hodeidah. The photo was first published by Yemeni journalist Hussain al Bukhaiti, the official’s brother.

The vehicle was part of a $2.5 billion sale to the UAE in 2014. The sale document, seen by CNN, certifies that “a determination has been made that the recipient country can provide the same degree of protection for the sensitive technology” as the United States. [Emphasis added]

In fairness to Murphy, the article never mentions Obama’s name and does include this misleading paragraph:

…[S]ome of America’s “beautiful military equipment,” as US President Donald Trump once called it, has been passed on, sold, stolen or abandoned in Yemen’s state of chaos, where murky alliances and fractured politics mean little hope for any system of accountability or tracking.

Then again, Murphy was in the U.S. Senate when the munition sales were made so he should know better. 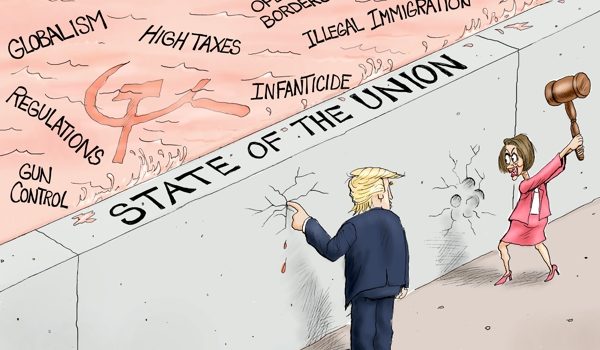 Cartoon of the Day: Union at stake
Next Post
Elizabeth Warren apologizes for calling herself ‘Native American’