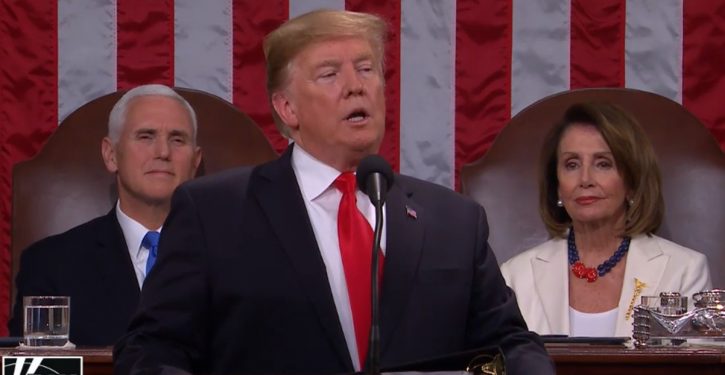 I noticed that Ann Coulter didn’t like President Trump’s State of the Union address on Tuesday night.  She wasn’t just skeptical or “meh”; she was peevish about it.

"Golden beaches of California"? This was the lamest, sappiest, most intentionally tear-jerking SOTU ever. Please fire your speechwriter, @realDonaldTrump.

I think she’s out of step.  A lot of people on social media were calling it the best SOTU they’ve ever heard.  I don’t know; I don’t remember SOTUs that well from year to year.  But the main impression I came away with was a sense of grace and positive energy.

It probably wasn’t Nancy Pelosi’s smartest move, to paint a big red arrow on this SOTU and basically guarantee that it would have more attention than usual.

Just a few observations.  Kind of at random, in fact; these are just the things that jumped out at me and demanded to be remembered.

One is that it was quite surprising to me how many times Democrats in the chamber joined in the applause and even the standing ovations.  And not just for some of the presidential guests recognized during the speech, or commendations directed at the military or first responders.  Quite a few Democrats stood to applaud policy statements (e.g., prison sentencing reform and trade negotiation; even the declaration against socialism late in the speech).

Fox reporters said before the speech that Nancy Pelosi had laid down the law: no acting out or acting up to cause disruptions.  So I wasn’t expecting to see dramatic walkouts or hear cat-calls.  But I also wasn’t expecting to see the Democrats divided, with a number of them visibly joining the Republicans in cheering for Trump policies.

They didn’t do that last year.  If you listened to the media, you’d think Trump has been so awful over the last 12 months that there’s no way the Democratic side of the chamber would show any support for his policy statements.  But they did – and it was new since last year.

The moment with the Democratic women in the white outfits, when they jumped up for three successive standing celebrations of women’s accomplishments as Trump laid their triumphs out, was especially remarkable.

The Democratic women in white stood and applauded, along with Pelosi, when Trump cited figures of growing female employment and record-setting representation in Congress. He pointed at them and said, 'Don't sit yet, you're gonna like this.' #SOTU https://t.co/xQzf2HBMCV pic.twitter.com/wJxv5vIiPW

The women even started chanting “USA! USA!” – rarer for left-wing women than for anyone else in politics.

Another observation: to the extent he lost people on the right side of the aisle, Trump probably lost the most when he spoke about foreign policy.  I think he resonated with his base when he said “Great nations don’t fight endless wars,” and talked about bringing the troops home and negotiating a settlement with the Taliban.  But I could hear a thousand think-tankers crying out and being silenced.

In the normal course of human patterns, the think-tankers wouldn’t be wrong.  The Taliban don’t negotiate in good faith, and never will.  Simply looking for a way out of Afghanistan and Syria is a goal that starts out disembodied; untethered to a policy, lacking strategic context, leaving allies and regional partners in the lurch.  All correct evaluations, not reasonably arguable.

I do wonder, however, looking with a wide lens at the SOTU and Trump’s presidency to date, if the most rational, best historically-based assessments of a prospective U.S. withdrawal will actually prove out.

So many things that happen in Trump’s wake are improbable.  That a U.S. economic recovery would be so astonishingly rapid under Trump, after years of stagnation, defies expectations.  It defies them as much as the endorsement of Trump’s policy statements by Democrats standing and clapping on national TV, during a speech in which Trump pulled no punches about issues on which virtually all Democrats disagree with him sharply, such as a border wall.

Likewise, there was no way the SOTU on Tuesday would be crowned with grace – with moment after moment that showcased God’s grace shed on America – and yet it was.  There were the recognitions of our old soldiers, the ones who fought at Normandy on D-Day; the emotional presence together of a Holocaust survivor and the American soldier who liberated him at Dachau; the former prisoners who had reformed their lives and made spiritual turn-arounds and had their sentences commuted by the president; the lovely little 10-year-old girl, Grace Eline, who is fighting cancer; the president’s promise to eradicate HIV and AIDS, and his vow to “angel” families that the hearts broken with the loss of their loved ones to murder by illegal aliens will not be flattened in the road under the steamroller of policy.

Most improbably of all, the whole chamber spontaneously sang “Happy Birthday” to 81-year-old Judah Samet, whom Trump recognized during his address as a survivor of the Nazi death camps and a survivor of the horrific attack on Jews at the Tree of Life Synagogue in Pittsburgh in 2018, in which 11 people were killed.

Ann Coulter called these things sappy.  Maybe they are, but they’re the things that matter to the lives, the hearts, the souls of the people.  When was the last time any national government, anywhere, ever, paused in its stately rituals to sing Happy Birthday to one aging citizen?

I guarantee you, the Americans who carry this nation on their shoulders, the ones who just keep hoisting their rucks every day and going about their business, providing for their families, producing everything we have, would rather sing Happy Birthday to a stranger than hear one more word about what a terrible place their country is.

They’d rather know that the captives are free and the sick are healed and the prisoners are reformed and the persecuted are safe among us, than plot to move other people’s money around to suit the tantrums of an ill-tempered ideology.  When the president says “We were born free and we will stay free; America will never be a socialist nation,” those Americans leap to their feet with a roar of assent.

They shout because the idea isn’t new to them, but old. It has been with them for years, and they thank God Almighty that their president is finally just saying it.

What his critics never seem to get about Trump is that the result he produces is felt as an aura of grace and hope by people who would rather live by grace and hope.  The people started out that way: preferring the positive.  Preferring grace and hope, and what freedom allows us to do with them.

Trump is somehow, maybe even improbably, a president who keeps his promise to hold the line and protect grace and hope – protect them against an army of ideologues, furiously negative, angry, unforgiving, and bent on living by guilt and destruction.  That is how he is measured by his supporters: he holds the line, or he doesn’t.

The SOTU Tuesday night showcased this.  After all the tumult and the shouting beforehand, it affirmed the basic things that can’t be glossed over: that we must have border security and the rule of law, and Trump won’t cooperate in dealing them away through semantics; that we must err on the side of life and prohibit practices that amount to infanticide while masquerading as “choice”; that our birthright as Americans is not entitlement to what other people have earned, but freedom to build our own futures and legacies.

If we’ve learned one thing with this president, it’s that he is likely to break his own spell tomorrow with an unseemly statement or an ill-timed tweet.  So be it.  I’m done giving an ear to wailing and gnashing of teeth over that.

I still don’t agree with all of Trump’s policy vectors, and probably never will.  But he is the choice set before us today between life as a republic of free citizens, and death in a sucking vortex of government-mandated resentment and grievances against our fellow men.

In 2013 Ilhan Omar blamed U.S. for al-Shabab terrorist attack on Kenyan mall
Next Post
SOTU from the haters’ perspective 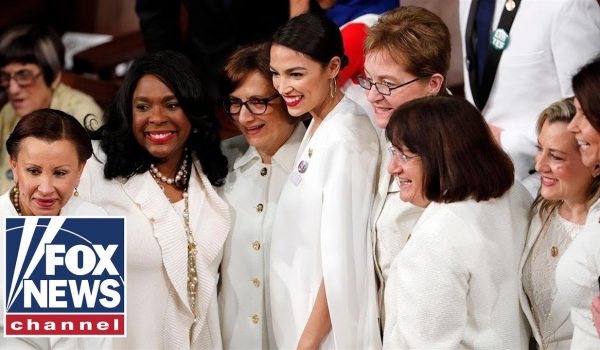