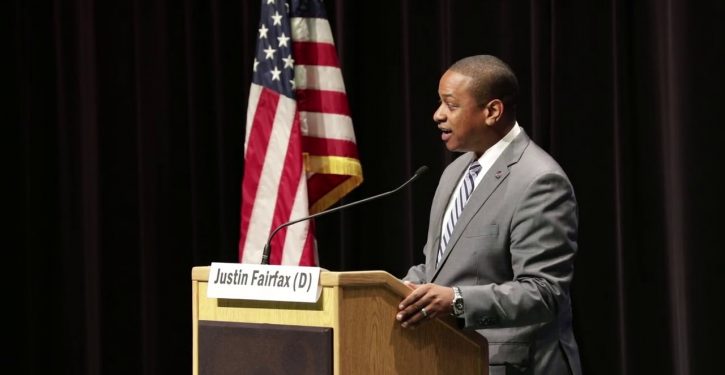 Virginia Lieutenant Governor Justin Fairfax (D) has been accused of committing sexual assault against Vanessa Tyson in 2004. She is a fellow progressive, with no apparent reason to lie about him (Tyson is a professor and researcher at Stanford University).

In response, he has threatened the web site Big League Politics, which disclosed the allegations, with a libel lawsuit. His threatened lawsuit is based on his false claim that the Washington Post found that there were inconsistencies and red flags in her story. As the Richmond Times-Dispatch noted, Fairfax’s claim was untrue:

The Washington Post in an article posted on its site Monday afternoon acknowledged it had investigated the claims, but denied Fairfax’s assertion that it had found ‘significant red flags and inconsistencies within the allegations.’ Instead, The Post said that when approached by the woman after the November 2017 election, and Fairfax’s defense, it ‘could not find anyone who could corroborate either version.’

In short, the Post did not reach a conclusion about who was telling the truth, Fairfax or his accuser, contrary to Fairfax’s claims.

The fact that sexual assault or harassment allegations are not independently corroborated does not prevent them from being true. For example, a jury or tribunal can find that uncorroborated sexual abuse allegations are true by clear and convincing evidence, or even beyond a reasonable doubt, if the complainant testifies persuasively or with conviction, or the accused is unpersuasive or shifty-eyed. For example, the New Jersey Supreme Court found that a judge was guilty of sexual harassment by clear-and-convincing evidence, in a he-said, she-said situation, even though there was no corroborating evidence or independent confirmation of the misconduct. (See In re Seaman, 627 A.2d 106 (N.J. 1993)).

Even if Fairfax’s false claim that the Washington Post found inconsistencies in Tyson’s story were true, he could not successfully sue Big League Politics for libel. You don’t have to be a perfect person to be raped, and even if your recollection is imperfect or inconsistent about the details of your sexual assault (such as due to trauma), you can still be telling the truth. A legion of court decisions confirm that.

To successfully sue for libel, a public figure like the Lieutenant Governor has to show not just falsity, but also, by clear and convincing evidence, that the claim was deliberately false, or made with reckless disregard for its falsity — with subjective awareness of a high risk that the allegation was false. (The Supreme Court so ruled in its decisions in St. Amant v. Thompson (1968) and New York Times v. Sullivan (1964)).

The Big League Politics web site has reported the allegations against Fairfax, along with his denials. But even if it had declared he committed the assault, rather than just reporting the allegations, that wouldn’t prove it was lying. It could easily have believed the accusations against Fairfax, even if others like the Washington Post view them as unproven. Big League Politics could easily have reasoned, why would a liberal academic like Vanessa Tyson falsely accuse a fellow liberal of sexual assault? Especially when she has no financial motive for making the allegations (presumably, the statute of limitations has expired on any civil lawsuit she could bring against him over the assault). She is a staunch progressive and fan of Nancy Pelosi (D), the Speaker of the House of Representatives, and has no political motive for lying against her fellow liberal Democrat, Justin Fairfax. What reason could she have for lying?

Inconsistent statements by the accuser don’t prevent a jury from finding the accused guilty — even though the jury could have looked at the very same evidence and found him not guilty. A federal appeals court upheld a rape defendant’s conviction even though the victim lied in court, and for the defendant, the case looked about “as good as it was going to get — the rape ‘victim’ ‘testifies that she wasn’t raped,” contradicting earlier out-of-court statements that she was raped; and, in addition, “the corroborating witness is a crack dealer, who lies even about his own name, with a motive to keep [the defendant] in jail (he had developed a sexual relationship with [the defendant’s] fiancée), and the medical evidence was weak.” (See Greene v. Henry, 302 F.3d 1067, 1073 (9th Cir. 2002)).

In short, different people can look at the very same facts and come to a different conclusion about whether a rape or sexual assault occurred. The fact that someone disagrees with you doesn’t show intentional or reckless disregard for the truth, known in defamation law as “actual malice.”

Even putting aside the fact that The Post’s investigation did not find that Tyson had lied, as Fairfax falsely suggested, even lies do not preclude the possibility of a sexual assault. The fact that a rape victim lied about various things, such as about whether she used drugs, does not prevent a jury from believing her sexual assault allegation and convicting the defendant. (See, e.g., Grotemayer v. Hickman, 393 F.3d 871 (9th Cir. 2004)).

Again, the Washington Post did not find that Tyson had made inconsistent or false statements.

Moreover, as Big League Politics noted, the allegations against Fairfax are far more specific and detailed than the vague sexual assault allegations against a conservative judge that the Washington Post chose to report in 2018, and that many liberal journalists assumed were true. That includes “the specific details provided in Tyson’s allegation such as a specific event, time and location.”