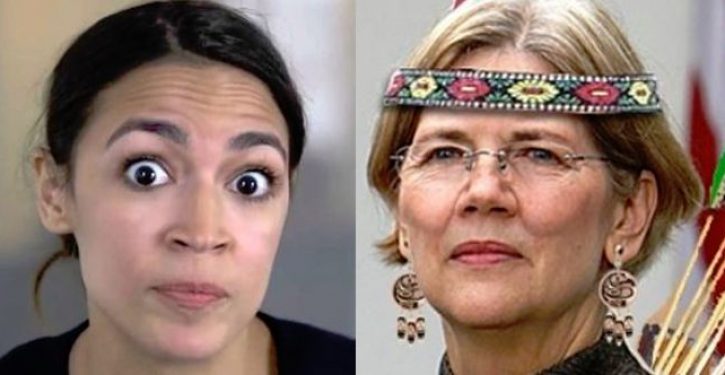 Last week LU’s Ben Bowles observed that Sen. Elizabeth Warren appeared to be channeling newly minted Rep. Alexandria Ocasio-Cortez. The observation was made in response to Warren’s having mistated the number of co-equal branches of government, which was reminiscent of Ocasio-Cortez’s prediction shortly after the midterm elections that Democrats would “take back all three chambers of Congress” in the next election.

Now it appears Warren fully intended to walk in AOC’s moccasins — er shoes. On Tuesday she appeared on CNBC’s “Mad Money, where she defended her “ultra-millionaire” tax plan to host Jim Cramer, explaining:

Tippy top, a phrase seldom heard from the mouths of people who aren’t toddlers, is the term that AOC used in explaining her proposed 70% marginal tax rate on personal income above $10 million. Warren further babified it by adding a second tippy.

Warren doesn’t emulate Ocasio-Cortez in language only. Her math skills are equally weak. Her variation on the classic “soak the rich” scheme, like AOC’s, is subject to the laws of human nature, which were laid out by the Washington Post the day after Ocasio-Cortez unveiled her plan on CBS’s “60 Minutes.”

“You’d certainly see some people under that system change their behavior to avoid the higher rate, which could significantly impact how much revenue it generates,” [former Treasury Department official Mark] Mazur said. …

Lawsuit could expose hand of Qatar in manipulating – and funding – U.S. media
Next Post
Ocasio-Cortez on Paycheck Fairness Act: It is time to pay people what they are worth