The wife of a Justice Department official who worked for Fusion GPS during the 2016 campaign told Congress in 2018 that one of her tasks at the opposition research firm was to research President Donald Trump’s children, including their business activities and travel.

Ohr said during the testimony that Steele, who like her was a contractor for Fusion GPS, hoped that her husband would pass the materials to the FBI.

“My understanding was that Chris Steele was hoping that Bruce could put in a word with the FBI to follow up in some way,” Ohr testified to members of the House Oversight and House Judiciary Committees, according to transcripts confirmed by The Daily Caller News Foundation.

The Ohrs met with Steele and an unidentified British associate on July 30, 2016 at the Mayflower Hotel in Washington, D.C.

Bruce Ohr testified to Congress on Aug. 28 that the meeting covered three main topics. He said Steele claimed that a former official with Russia’s SVR claimed that the Kremlin had Trump “over a barrel.”

Steele also relayed information about Carter Page, the former Trump campaign adviser who Steele claims in his dossier met with two Kremlin insiders during a trip to Moscow in early July 2016. Page has denied Steele’s allegations, saying he did not meet with the two Kremlin officials.

Steele, a former MI6 officer who operates out of London, also told Ohr that a lawyer for Russian oligarch Oleg Deripaska was investigating Trump campaign chairman Paul Manafort over a business deal gone south. Steele reportedly worked at one point for one of Deripaska’s companies. The link is ironic given that Deripaska is considered a close ally of Vladimir Putin’s.

“And you hadn’t seen it or its portions during the time that you were employed, correct?” one lawmaker asked.

“If I recall correctly, I may have seen…maybe a page or something of it at the breakfast,” Ohr replied.

Ohr, a trained Russian linguist, also detailed some of the topics she worked on for Fusion GPS, which was hired by the law firm that represented the Clinton campaign and DNC to investigate Trump.

“But in terms of actually performing research, did you begin to break out President Trump’s family in terms of Melania Trump, all of his children? Were you doing independent research based off of each family member?” one lawmaker asked Ohr.

“I did some,” Ohr said. “As I recall, I did some research on all of them, but not into much depth.”

“I’m afraid it was relatively superficial. It was,” adding that, “I looked into some of his travels and you know not sure how much detail I remember, at this point.”

“I looked into some of her travels,” said Ohr.

The goal was “to see whether they were involved in dealings and transactions with people who had had suspicious pasts.”

Nellie Ohr also testified that she investigated any links between Russian oligarchs and the Trump real estate empire.

It is unclear whether Ohr shared any information that she gathered working for Fusion GPS with her husband, who served as associate deputy attorney general until he was reassigned in December 2017. There is also no indication that Ohr’s research of the Trump children wound up in the dossier, which the FBI used to obtain surveillance warrants against Carter Page.

Bruce Ohr met with Steele and Fusion GPS founder Glenn Simpson prior to the 2016 election. That conflicts with testimony given by Simpson as well as a memo released by Democrats on the House Permanent Select Committee on Intelligence. (RELATED: Bruce Ohr Testimony Undercuts Adam Schiff’s Defense Of FBI)

Simpson testified to the Intelligence committee on Nov. 14, 2017 that he did not meet with anyone from the Justice Department or FBI until after the election. But Ohr testified that he met Simpson on Aug. 22, 2016.

Democrats on House Intelligence also claimed in a memo released last year that Ohr did not pass information he gleaned from Fusion GPS or Steele until after the election. But Ohr testified that he contacted top FBI officials almost immediately after his July 30, 2016 meeting with Steele.

Ohr met with then-Deputy FBI Director Andrew McCabe and his general counsel, Lisa Page. Ohr said that he debriefed the pair on his meeting with Steele.

Ohr met with FBI and Justice Department officials the following month. Involved in one of those meetings was Peter Strzok, the FBI’s lead investigator on the Trump-Russia probe. Strzok was fired in August 2018 over anti-Trump text messages that he exchanged with Page during the same period that he was working on the investigation.

Ohr also met with Justice Department lawyers Andrew Weissmann and Zainab Ahmad, both of whom currently work on the special counsel’s team.

Ohr served as the FBI’s back channel to Steele even after the bureau severed ties with the former spy in early November 2016. The FBI ended its relationship with Steele because he had talked to the press about his investigation of Trump. After Trump’s election win, Strzok and other FBI officials asked Ohr to maintain contact with Steele and report back to investigators. 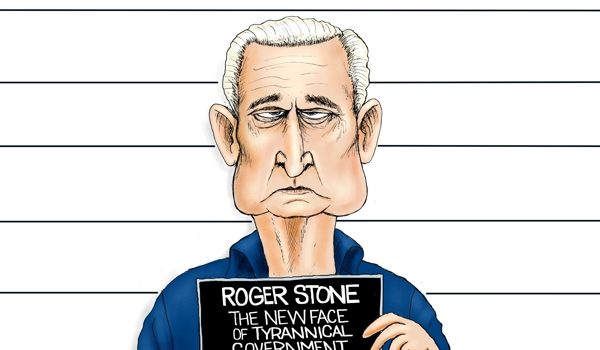 Cartoon of the Day: Public enemy #1
Next Post
Just when you thought Ocasio-Cortez couldn’t tweet anything dumber