One thing that’s clear about the Mueller investigation at this point: it’s not going to bring down Trump.  In 19 months, it hasn’t uncovered anything to bring him down for.  It’s been going down rat-holes left and right, abusing people with life-altering legal jeopardy, lawyer fees, and process-crime spinning.  But it has yet to even define a crime of which to suspect the Trump 2016 campaign organization, much less uncover one.

Meanwhile, the net effect of the process has been to expose the complicit connections – to a vast anti-Trump effort – of U.S. government officials, the Obama administration, the Hillary Clinton campaign, the Democratic Party leadership, an array of lobbyists, law firms, and consultants, big-money donors (on the right as well as the left), the media, and even foreign actors like the intelligence and diplomatic services of the British Commonwealth.

Because of the Mueller probe, and the leads attributed to it in incessant media “leaks,” we know far more now about the repellent things dozens of anti-Trump people were doing in 2016 than we would ever know without it.  We know about practically everything we are now aware of – things to the discredit of Trump’s attackers – because of the effort being waged against Trump.  The more they try to place and spin allegations about Trump, the more we discover about who these people are and what they’ve been doing.

The starting gun for the drama of exposure we’re in now was the David Ignatius article of 11 January 2017, based on the felonious leak of classified intelligence information about a perfectly legitimate conversation between prospective national security adviser Michael Flynn and Russian Ambassador Sergei Kislyak.

Now – in January 2019, two years on – the special prosecutor appointed four months later serves as the formal pretext for keeping the same “leak” process going, and thus placing with the public an evolving anti-Trump narrative.

It’s excruciating, to be sure.  But the net effect so far hasn’t been to fatally undermine Trump.  It’s been to expose the enthusiasm of a “deep state” for breaking the law however it has to, to attack the president elected by the people.

The effect has also been to break their hold on the levers of government.

The political and media battle has been an ugly one.  But the material result is not what Trump’s attackers could have been hoping for.  Consider just one aspect of it: the anti-Trump personnel problem in the national security establishment.

Two years ago, we were all writing about the opposition Trump was struggling against on the staffs of the National Security Council, State Department, ODNI, and CIA.  The Michael Flynn kerfuffle – the first round of the probe-accusation-and-exposure fight – centered directly on that problem set.

Throughout the balance of 2017, we saw repeated, barely concealed attempts by those national security staffs to submarine the president and his top circle of advisers in their pursuit of policy.  Trump was supposed to have his hands tied by a series of “adults in the room” forced on him by the better judgment of national security experts: “adults” who would keep him in the box and prevent him from changing course on policy.

But in 2019, no one but us wonks even remembers that.  The opposition staffers are mostly gone now.  Trump is still there.  The State Department lost a huge number of senior personnel under Rex Tillerson, and the majority of them were establishment careerists dedicated to opposing the Trump policy vectors.  When Mike Pompeo moved to Foggy Bottom, he took over a State Department ready to be populated with people who would work with Trump instead of against him.

Trump outlasted being babysat by H.R. McMaster and now has John Bolton as his national security adviser.  (I never assumed, myself, that McMaster saw it in those terms, but the media and the foreign policy establishment unquestionably did.)

In the teeth of opposition from the national security establishment, Trump moved the embassy to Jerusalem, reset the vector of relations with North Korea, and suspended U.S. participation in the JCPOA with Iran (or “Iran deal”).

What’s going on at the CIA is always obscure and hard to interpret, but Trump has achieved two very big things even there: installing a Director (Gina Haspel) who isn’t a big political personality but is an insider who knows where the Agency bodies are buried; and drastically reducing the problem of political leaking from Langley.

We hardly hear anything purporting to come from CIA leakers now, a welcome contrast to the vast and growing industry of CIA leaking between 9/11 and 2017.  (In fact, the character of “intelligence” leaks today is such that they clearly come, for the most part, from mid-level staffers – probably on the NSC – who have access to finished intelligence but no responsibility for approving it, much less inside knowledge of how it is affecting top-level decision-making.)

Trump, in other words, is prevailing in this long-running confrontation.  Just as importantly, we have learned a vast amount in the last two years about the role played by our national security organizations in spying on and attacking Trump even before he was elected – and we’ve learned it because of the attempt to create doubts about Trump as an excuse for “investigating” him.

To go after Trump, the organizations of the “deep state” or “permanent state” have to twitch, and thereby call attention to themselves.  Each time they’ve done so, they’ve exposed their own nature and activities.  (Just assembling the Mueller team was exceptionally illuminating in that regard.  It’s easy to forget how much we have learned from tracing the connections of the team members.)

We need to know that our legacy media have shifted, probably to a fatal extent, to a business of selling propaganda and backing political agendas rather than seeking truth and accountability.

We need to know that big-donor networks are funding the politicized media, along with a revolving-door non-profit establishment for career activists whose goals too often are about selling thematic lies to the public.

The exposure is unintentional, to be sure.  But it just keeps happening.  The harder they go at Trump, the more we learn about them – and the more setbacks they begin to suffer.

The media crackup of which BuzzFeed is emblematic, with its Russiagate “scoop debacle” about Michael Cohen and Trump last week, metastasized overnight into the even bigger “lie debacle” about the MAGA kids from Covington Catholic (here and here). This development has been a long time coming, but now that it’s here, it’s strapped to a rocket booster.  One minute the media were just failing to vet sources and do their due diligence; the next they were lying outright about what happened, when every single piece of primary information about the event refuted the tale they were spinning.

More than the media’s credibility was taken down by the lie-debacle involving the MAGA kids.  A whole industry of yammering, totem-shaking sanctimony – much of it the province of anti-Trump conservatives as well as their confreres on the left – has been handed its walking papers.

The more information came out, the clearer it was that their prejudicial assumptions about Trump supporters were not just assumptions in bad faith, but assumptions clung to in the face of direct counter-evidence.  The “smirking” teen in the viral photo at the Lincoln Memorial not only wasn’t a nasty little punk; he actually outperformed what a good 80% of adults would manage in a similar situation, in terms of grace and self-control.

This kid, who's life is currently being destroyed, actually gestures to his friend to show Nathan Phillips respect during his drumming! All of it happening of course with another activist is screaming to go back to Europe because all he can do is be white? #CovingtonCatholic pic.twitter.com/OaK6MX5m2S

The spell of anti-Trump sanctimony was broken this past weekend.  It’s done.  Its power has evaporated.  Some people probably don’t see that now.  But they will.  As with all the effects of “Trump,” their epiphany will take time.  But it will happen.

Less than a year and a half ago, in October 2017, I suggested that the Mueller probe should be shut down forthwith.  My reasoning at the time was that the probe was a blatant misuse of the processes of law.

The probe has continued, however, and with each passing month continues to achieve the opposite of its goal.  It’s uncanny.  Kurt Schlichter addressed the phenomenon in an op-ed at Townhall on Monday entitled “Everyone Who Takes on Trump Ends Up Crushed.” He’s right.  It just doesn’t happen immediately.

There’s a lot that still needs crushing out there.  We don’t know yet the full extent of the long-running effort we now think of as the political war against Trump.  It became uniquely focused when it became about Trump, in late 2015.  But it has always seemed to be more about what Trump represents – a real departure from business as usual in Washington – than about Trump himself.

What has it all really been about?  I don’t think we know.  Going back to the “national security establishment” focus of the problem in early 2017, there was a consensus at the time that the “deep state” was so anxious to undermine Trump because he threatened the “Iran deal.”  I’ve never considered that explanation satisfactory.  The point that weakening the JCPOA would undo Obama’s “legacy” is especially unpersuasive – as if we are to believe that so much skulduggery, skulking, lying, and abuse of power has all been about preserving a president’s “legacy.”

The theory that it’s all about protecting Hillary Clinton from prosecution likewise comes up short.  Nobody is that politically necessary.  Hillary isn’t viable anymore as a presidential candidate; she’ll never be able to dispense favors from the Oval Office.

This is about something else.  Something a whole political class seems willing to burn down its own house for.

I suspect the reason for waging political war so brutally and lawlessly is about more material goals, relating to the mechanisms of the American permanent state and how they facilitate accumulating both cash and power.  One thing we can certainly deduce: the goals have to do with the agendas of the big-money donors in the background, who have put billions into cultivating a political environment conducive to their aspirations.

Those donors care little about Obama’s legacy, or about Hillary’s political entitlements.  There’s a lot yet to be exposed.  Clearly, the best way to shine a harsh, relentless light on it is to let the anti-Trump forces fling themselves at him for another two years.  The deeper they imagine themselves to be digging, the more we will find out about them.

And – by their own hand – the more their power will be broken. 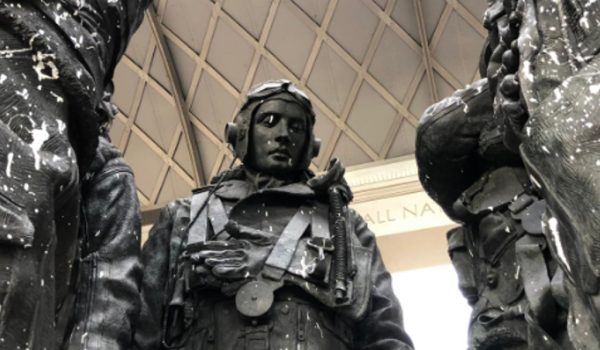 WWII memorial, statue of Churchill vandalized in London
Next Post
House Homeland Security chair: ‘Would not rule out a wall in certain instances’ 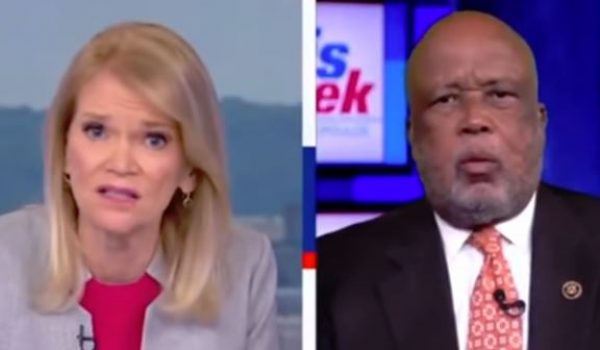