There’s more. Before anyone declares this the dumbest comment Rep.(!) Alexandria Ocasio-Cortez has made, be advised that there is a punch line. The entire quote, delivered at the annual MLK Now event, held this year at Riverside Church in New York, includes the line “and your biggest issue is, your biggest issue is how are we going to pay for it?” Not only does this ditz believe that unless drastic action is taken the planet will disintegrate or explode or burn up or something a dozen years from now. But she also believes that money envisioned for some stopgap solution is of no object.

It’s also worth nothing that the audience burst into applause at her doomsday prediction.

The money portion of her rant, a video of which follows, reads:

I think that the part of it that is generational is that millennials, and Gen-Z, and all these folks that come after us, are looking up and we’re like, the world is going to end in 12 years if we don’t address climate change, and your biggest issue is, your biggest issue is how are we going to pay for it?

And like, this is the war, this is our World War II. And I think for younger people, we’re looking at this and we’re like ‘how how are we saying, let’s take it easy when 3,000 people died last year?’

.@AOC on millennials and social media: "We’re, like, the world is going to end in 12 years if we don’t address climate change" pic.twitter.com/HjhbVyfFN4

Ocasio-Cortez has expressed her naïve belief before that the government somehow just “gets” the money to pay for urgent programs when the need arises. When asked last September (before the midterm elections!) how she would finance her $38 trillion socialist pipe dream, she replied:

We do know and acknowledge that there are political realities. They don’t always happen with the wave of a wand but we can work to make these things happen. 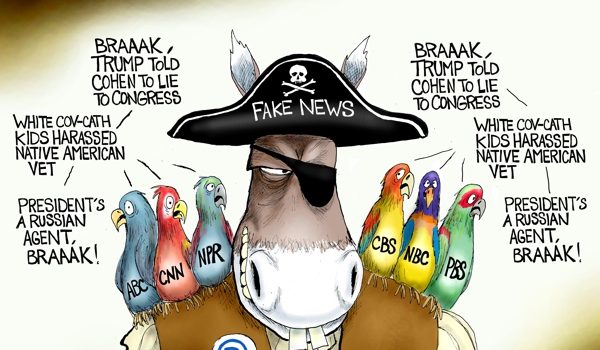 Cartoon of the Day: Flocking together
Next Post
Fox News anchor Brett Baier, family in car crash, released from hospital