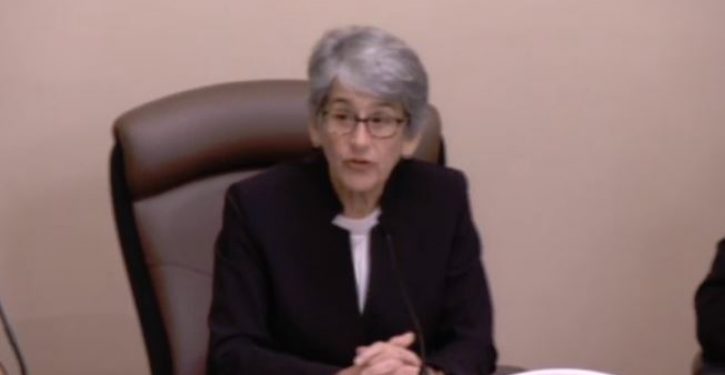 For the unenlightened (read: normal, well-adjusted), the term binary as used in the title of this post refers to the traditional (read: biological) breakdown of human beings into one of two sexes. For the politically correct (read: perpetually indignant about one social injustice or another), binary pronouns are taboo because they don’t account for the feelings of people who claim to be neither.

Lump Hannah-Beth Jackson into the politically correct category. Jackson is a California State Senator and chair of the Senate Judiciary Committee, and she announced on Thursday that henceforth only “gender-neutral” pronouns would be permitted during committee hearings:

Our first order of business is to approve the committee rules. I’d like to note — in respecting the fact that we are now a state recognizing the non-binary designation as a gender — he and she, we are now merging them so we are using what my grammar teacher would have had a heart attack over: we are using the phrase ‘they’ [sic] and replacing other designations so it’s a gender neutral designation: ‘they.’Basically, that’s the primary reforms and revisions to the committee rules.

In the spirit of gender neutrality for the rules of this committee, we now designate the chair as ‘they.’

The fun starts at 13:20 in the video that follows.

Jackson omitted the genitive, objective, and reflexive forms of the third-person singular pronouns — his/hers, him/her himself/herself respectively — in her procedural commentary, but we take it on faith that those are also no-nos.

I would loved to be a fly on the wall of the first Judiciary Committee hearing, listening to those in attendance grappling with when to use ze versus sie, e, ou, and ve, let alone trying to pronounce them. That’s assuming that California limits is alternative pronouns to the ones listed above. One of the great delights of this liberal idiocy is that no one can seem to agree on what the complete set of gender-neutral pronouns should be. This past March, Kennesaw State University’s LBGT Resource Center added ne, ve, ey, ze, and xe to the mix.

It’s hard to imagine that enough liberals are willing to take the time to internalize all this gibberish ever to make it commonplace. In any case, the whole misadventure will fall by the wayside once gender craze dies down.

By the way, Jackson’s grammar teacher might also have had a heart attack over Jackson’s misidentifying they as a phrase.

A federal appeals court takes a big swing at Planned Parenthood
Next Post
Rep. Ilhan Omar will publish memoir, reportedly to explain America to us