On Wednesday, Nancy Pelosi suggested postponing Trump’s State of the Union address until the government shutdown is over. She emphasized that her concern was security for the event, but also pointed out that the timing seemed ill-considered with 800,000 federal workers furloughed without pay. LU has a good debate going about what that means and how to handle it.

On Thursday, Trump seemed to take Pelosi’s concerns to heart, and sent Pelosi a letter canceling the U.S. Air Force transportation for an overseas trip she was to start off on today.

POTUS tells ⁦@SpeakerPelosi⁩ he is canceling her trip to Belgium, Egypt and Afghanistan because of the shutdown pic.twitter.com/rLoCl3sLGw

Trump didn’t specifically allude to security issues in his letter. But security is certainly implied with the travel itinerary including Afghanistan and Egypt. Diplomatic and other federal law enforcement security experts (e.g., FBI delegations in the embassies) are having to operate in an uncertain shutdown atmosphere, and a House delegation is a lot of work for them.

Trump did refer to the 800,000 furloughed federal workers:

In light of the 800,000 great American workers not receiving pay, I am sure you would agree that postponing this public relations event is totally appropriate.

Trump points out that if Pelosi wants to pay her own way via commercial air, she is free to do so.

There isn’t a lot Pelosi can do to retaliate materially against Trump. The House, acting by itself, can’t affect federal funding on a short timeline. Pelosi and the House Democrats can probably find some way to harass and discourage the American people, but precision-targeting Trump would be harder.

Will the Senate stand with Pelosi and the House Democrats on this, or line up behind Trump? That remains to be seen. Senator Lindsey Graham has already indicated displeasure with the president’s move.

President Trump denying Speaker Pelosi military travel to visit our troops in Afghanistan, our allies in Egypt and NATO is also inappropriate.

Trump’s troll achieved especially trollish heights by being pulled off at the last minute.

.@SpeakerPelosi CoDel was scheduled to leave at 3pm, when @realDonaldTrump informed her that it was postponed.

According to reporters on-scene, an Air Force bus loaded with members of the Congressional delegation was just leaving the U.S. Capitol building for Joint Base Andrews when the news came through that the departure was canceled for today.

The bus drove ignominiously around the block, returning to offload angry delegation members in the same spot.

The bus went around the block and back to the Capitol where members eventually got off. pic.twitter.com/Os3LTTmG8h

USAF bus back on Capitol plaza. Mbrs getting off bus & going back into Capitol pic.twitter.com/k9luYw5YyC

Reportedly, phone calls were flying furiously between the Hill, the White House, Pentagon, and State Department.

Members are sitting on the USAF bus on CapHill they wait to see if they are departing on overseas trip Trump canceled.

Fox is told there are furious calls going back and forth now between the Hill, State, Pentagon and White House.

Trump punishes troops in Aghanistan b.c. his ego is hurt after Pelosi stopped him from forcing unpaid public safety officials to protect everyone at his lying SOTU. https://t.co/uvLHLFlYmG

Canceling Nancy Pelosi's trip is infantile, but putting the speaker of the house and government official's lives in danger is quite another. It infuriates me that the Mr. Trump would be so irresponsible as to announce details about their itinerary. He knows the danger entailed????

Granted, he had critics already, only moments before the Pelosi troll.

More of Trump playing with geopolitical stability to assuage his ego. It is time for China to step in, recognize Pelosi as 3rd in line, only communicate with her, & call a global leaders meeting to discuss sanctions against the US until we are no longer an unstable clear danger. 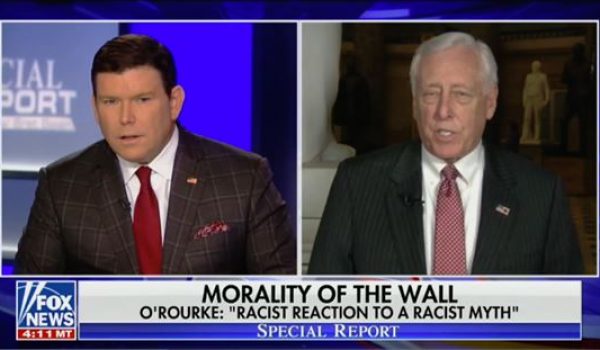 Dem leader Steny Hoyer: No, a wall is not ‘immoral’ or ‘racist,’ some ‘walls work’
Next Post
Bruce Ohr told FBI, DOJ long before FISA application that dossier was political doc for Clinton campaign