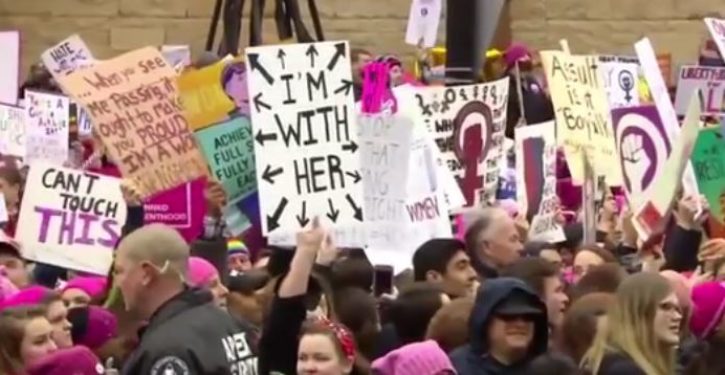 Surely the Left, which invented “self-identification” — the process whereby a person claims a different sex, ethnicity, or even age — could have done better than this. If nothing else, they could have polled prospective whiter marchers to find out which of them were self-hating, which is nearly as good as not being white.

Instead, as ABC affiliate KRCR reports:

The organizers of the annual Women’s March have decided not to hold a rally in Eureka on Jan. 19, as previously planned, because they say participants do not represent the diversity of the area.

“This decision was made after many conversations between local social-change organizers and supporters of the march,” organizers said in a press release.

“Up to this point, the participants have been overwhelmingly white, lacking representation from several perspectives in our community,” the press release went on to say. “Instead of pushing forward with crucial voices absent, the organizing team will take time for more outreach.” …

It appears not to have occurred to organizers that the “crucial voices absent” are absent by choice. Maybe members of the missing demographics are expending their protest energies on other worthwhile causes such as calling for the murder of police officers.

One prospective marcher tried appealing to the protesters’ ability to reason:

“I was appalled to be honest,” said Amy Sawyer Long. “I understand wanting a diverse group. However, we live in a predominantly white area … not to mention how is it beneficial to cancel? No matter the race people still want their voices heard.”

That includes white males, who are the universal target of contempt in all of these demonstrations. Maybe those who suffer from “white male rage” or believe there are too many white males should be reminded that racism is racism regardless of which group is singled out for hatred.

Beto O’Rourke: U.S. must focus on well-being of migrants ‘above any other concern’
Next Post
NYC to hire 6 workers to remove used needles from parks