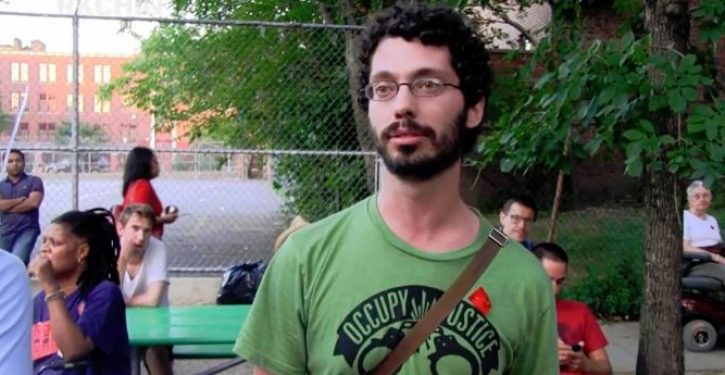 The progressive nonprofit organization that employs Antifa leader Joseph “Jose” Alcoff, who has advocated for the violent overthrow of the government, obscured references to the radical communist in its past press releases after Alcoff’s extreme ideology was exposed.

Alcoff, 36, has made significant efforts to separate his true identity from his fanatical personas, “Chepe” and “Jose Martin,” which he uses to lead Antifa groups and promote radical communist rhetoric, The Daily Caller News Foundation revealed Tuesday night. As Alcoff, he advocates for reforms of predatory loans before members of Congress as payday campaign manager for Americans for Financial Reform (AFR).

When speaking as Chepe and through his Twitter handle @sabokitty, Alcoff has called for the murder of the rich and encourages using violence to bring “a world without capitalism, without private property … that is socialist and communist.”

In July 2017, Alcoff urged his nonviolent followers on Twitter to “stop limiting yourself,” adding that “the left wins nothing w/ nonviolence.” He said it “feels good” to see Antifa’s “militant tactics” “mainstreamed” the following month.

Alcoff is also an organizer of Smash Racism DC, the Antifa group responsible for mobbing Fox News host and DCNF co-founder Tucker Carlson’s house in November and for chasing Texas Republican Sen. Ted Cruz from a D.C. restaurant in September.

AFR did not respond to multiple requests for comment asking if it was aware of Alcoff’s extreme and violent rhetoric or if it planned on taking any action in regards to the radical’s statements.

Instead, the progressive nonprofit obscured references to Alcoff on its website after TheDCNF exposed Alcoff’s radical personas. AFR modified references to “Jose Alcoff” in at least seven press releases to “Jose A” sometime before noon local time Wednesday.

TheDCNF contacted AFR at 12:13 p.m. local time Wednesday to inquire why it scrubbed Alcoff’s last name from its press releases. Less than 30 minutes later, his full name was added back to the press releases.

For example, “Jose Alcoff” was originally quoted in a May 31 press release on AFR’s website, according to Google’s Dec. 3 cache of the web page. His name had been modified to “Jose A” when TheDCNF archived the press release at 12:19 p.m. Wednesday.

AFR did not respond to multiple requests for comment asking why the changes were made.

Additionally, Stop The Debt Trap Campaign, the AFR arm where Alcoff works, tweeted individual pictures of its employees on June 21, 2016. Each tweet included the employee’s full name, except Alcoff, who was only listed as “Jose.”