Princeton economist and New York Times columnist Paul Krugman has appropriated the term axis of evil used by former President George W. Bush in his 2002 State of the Union address to categorize Iran, Iraq, and North Korea. But whereas Bush used the phrase to designate terrorist entities that posed existential threats to the U.S., Krugman’s axis of evil includes the U.S., along with Russia and Saudi Arabia.

You might logically assume that the K man is comparing the U.S. under Donald Trump to a nation that kills and dismembers dissident journalists and another with imperial designs. The idea is preposterous, but if your worldview is slanted as far left as Krugman’s, it makes some sense.

But that isn’t what Krugman had in mind at all. This tweet explains.

Krugman’s beef with the three nations in his axis is that all objected to the UN’s endorsement of a landmark study on global warming. Via Fox News:

This week’s dispute stemmed from whether diplomats attending this year’s U.N. climate summit in Poland would “welcome” the Intergovernmental Panel on Climate Change’s report projecting what would happen if average global temperatures rise by 2.7 degrees Fahrenheit and offering prescriptions to ensure they don’t rise higher. An agreement to “welcome” the report would have made it the benchmark for future policies.

The U.S., Russia, Saudi Arabia and Kuwait objected, calling for the study to be “noted” but not “welcomed.”

One wonders whether Krugman will admit his error if his doomsday prediction of a climatological holocaust fails to materialize any time soon. He has yet to recant his claim in 2016 that “the shift of working-class people to the Republican party was a myth and that it was not happening outside the south.”

Caravan migrants descend on U.S. consulate in Tijuana: Give us each $50,000 to go home
Next Post
Cartoon of the Day: Charity begins at home 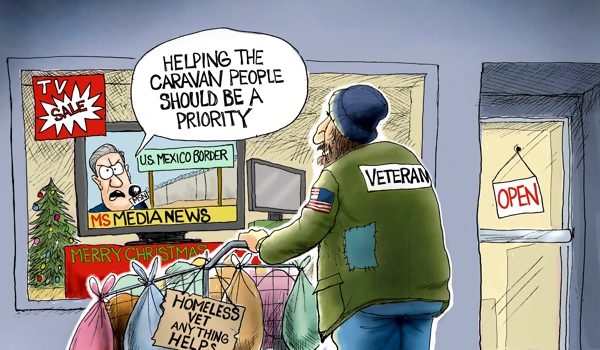