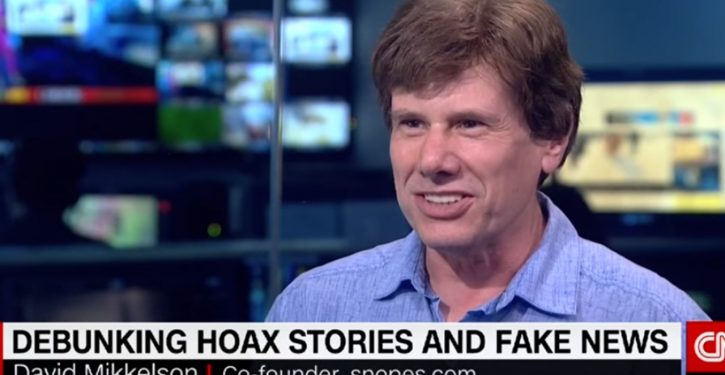 Snopes, a left-leaning fact-checking website given preferential treatment by Facebook and Google, botched its fact-check of a viral meme that was mocked within political circles for spreading false information.

The meme showed a picture of President Donald Trump with Republican lawmakers and members of his administration following the House’s vote to repeal Obamacare in 2017. Thirty-three people in the photo Snopes used had a red X over their face, though it cropped out a 34th person included in others.

The caption accurately claimed the photo was taken at the White House following the House’s Obamacare vote, then falsely claimed that “Everyone with an X has since been voted out of Congress.” 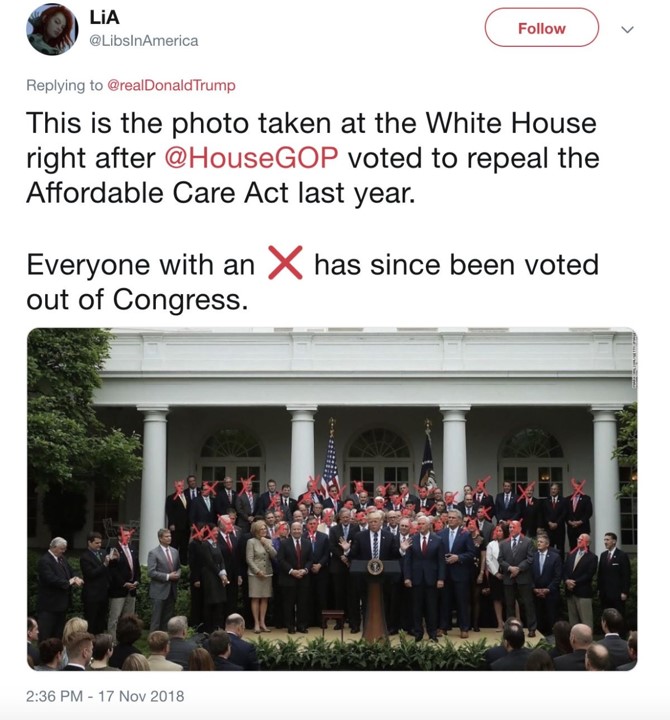 Lol at this dumb viral tweet full of inaccuracies. Aside from the many other wrong ones, he has an ‘X’ over Seema Verma’s face. She’s never even served in Congress ????????‍♂️ https://t.co/mPXIbI4rj1

This is quite literally insane fake news.

Amazing. This photo illustration — posted by @nicholaskitchel — is actually more incorrect than correct.

Or to be clear, it’s just flat out inaccurate. https://t.co/NH7xiCbbHq

A fact check by The Daily Caller News Foundation similarly found the meme was wildly misleading.

Kitchel deleted his tweet and acknowledged that it was inaccurate after being mocked online.

Palma rated it “true” that “The Congressional seats of almost three dozen Republicans who voted to repeal Obamacare were lost to Democrats in 2018” — a different claim than what the picture alleged, much less its “primary” claim.

“In the meme, red ‘X’ marks were drawn through the faces of 33 lawmakers who purportedly were rejected by voters in the 6 November 2018 midterm elections,” Palma wrote.

Both that claim and Palma’s summary of it were inaccurate.

Not everyone in the photo with an “X” over their face was a lawmaker — a fact left out of Palma’s fact-check. Centers for Medicare & Medicaid Services Administrator Seema Verma, for example, had an “X” over her face even though she’s not an elected official.

Moreover, many of the lawmakers who did have an “X” over their face won re-election.

“Although memes are frequently grossly inaccurate, this one got the general idea correct,” Palma nevertheless wrote. “By our count, at least 34 Republican legislators who voted to repeal or partially repeal Obamacare will not be returning to Congress when the new session begins in January 2019.”

Despite Palma’s framing, the meme didn’t claim that 34 lawmakers who voted for Obamacare weren’t returning to Congress in January — it falsely claimed that “Everyone with an X has since been voted out of Congress.”

After TheDCNF reached out to Snopes for comment, the website edited its article to claim “the persons actually pictured in the accompanying photograph are difficult or impossible to identify.”

TheDCNF’s own fact check, however, successfully identified and reviewed all 34 people.

Snopes, which has struggled with accuracy in the past, did not inform its readers of the update.

“The overall point offered by the meme in question is that some 33 Republican members of Congress who voted to repeal the ACA lost their seats. And as our fact check documents, that point is correct,” Mikkelson wrote.

“The meme isn’t really about the specific persons who appear in the accompanying photograph, as they weren’t identified by name and are largely unrecognizable to viewers as shown due to the small size of the photograph and the fact that their heads are obscured with red X’s,” Mikkelson insisted.

“Our audience is intelligent enough to understand the difference between a literal representation and a symbolic one,” he added, denying that the fact check was misleading.

Both Facebook and Google give Snopes preferential treatment as a trusted fact-checker.

Google places Snopes’ fact-checks at the top of its search results, as it does with a handful of other organizations including PolitiFact. (RELATED: PolitiFact Botched This Fact-Check On Kyrsten Sinema’s Pink Tutu)

Google News highlighted Snopes’ misleading fact-check on its home page on Wednesday alongside other fact-check pieces. 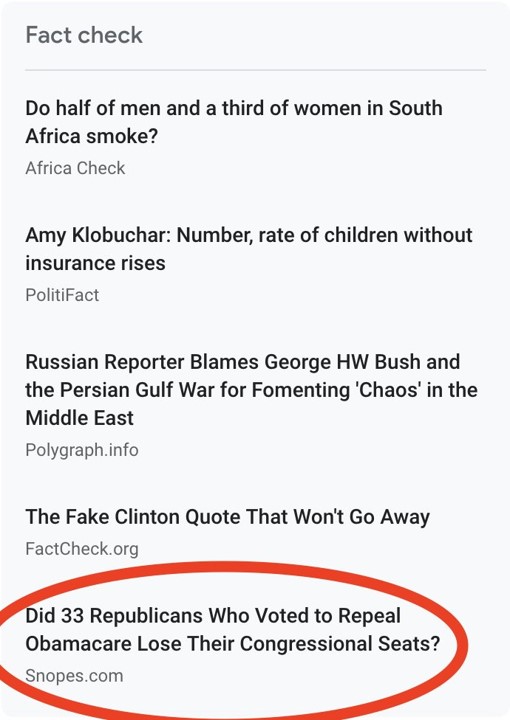 Snopes is one of Facebook’s fact-checking partners, which means many of the website’s fact-checks receive top placement in Facebook’s search results, much like Google’s.

Users who enter “Obamacare” into Facebook’s search bar, for example, find Snopes’s misleading fact-check at the top of the results.

A blue “Fact-Checker” badge appears alongside the post, lending Facebook’s credibility to the inaccurate article.

Taking stock: Never a case against Flynn, and DOJ/FBI knew basis of FISA application was faulty
Next Post
Meetings with Obama: Is O’Rourke-Gillum the fantasy ticket America is ready for? 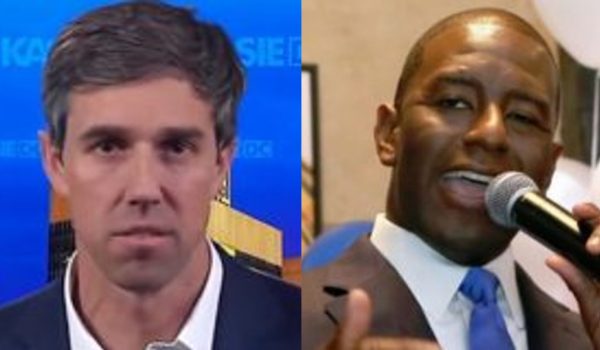