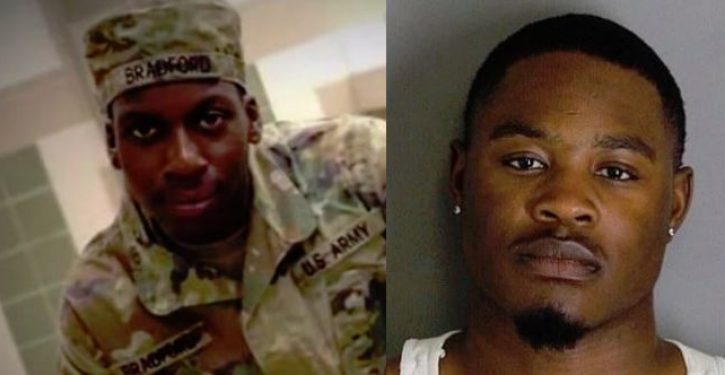 Liberal “comedian” Trevor Noah turned serious Tuesday night to deliver a sermon on the accidental shooting death of Emantic Bradford, Jr., who as reported here was mistaken for a gunman at a Hoover, Ala., mall outside Birmingham Thanksgiving night. (Police have since located and apprehended the real shooter, Erron Martez Dequan Brown, who bolted after wounding two people at the mall.)

During his five-and-a-half-minute lecture, Noah imputed racial profiling to the police who responded to incident, lamenting, ““How does this sh*t keep happening? The cops are called into a situation. They see a black person. And then immediately they shoot.” He concluded his monolog with the bleak observation that “the Second Amendment was not made for black folks.”

So what did happen that fateful night? Bradford — who was a military veteran, a licensed gun owner, and the son of a veteran of the Birmingham Police Department(!) — heard shots and reacted by drawing his weapon. Police responding to an active shooter report saw a young man holding a gun, and the rest is history. A statement jointly issued by police and the city of Hoover reads in part:

We can say with certainty Mr. Bradford brandished a gun during the seconds following the gunshots, which instantly heightened the sense of threat to approaching police officers responding to the chaotic scene.

Noah and others say that Bradford was what Second Amendment supporters call a “good guy with a gun” but that he was denied the benefits that go with that title because he was black. But according to attorney Benjamin Crump, who was hired by Bradford’s family, “Bradford was trying to help by waving people to safety” with his gun. That is speculative at this point, but if true, the optics nullify the good-guy-with-a-gun claim.

Obviously, the release of body camera footage should provide a clearer picture of what the officers saw and whether their response was measured and appropriate.

As for Noah’s suggestion that “the Second Amendment was not made for blacks,” I would submit that if that were true — if a man who didn’t understand the safe and responsible use of a firearm had been denied the right to own one — he might be alive.